I got to know him rather well in the early 70s when I was holed up at the old Columbia Studios on Sunset and Gower.  I had written a first draft of a western and on a whim sent it to him via the Director’s Guild.

The producer I was working with didn’t even know who he was.  Budd almost immediately called me back and said he was on his way over.  When he arrived, he said, “Let’s go riding. I’ve got my horses at Pickwick Stables.”  I think it was a test to see if I was up to snuff, so to speak.

I went home and pulled on my cowboy boot and met him at the stable.  He was already saddling up a stunning bullfighting horse from Spain named Peropo.  It had fought in the ring for at least a decade and had no scars.  That was my horse.  What an experience!  The most sensitive horse to shifting weight and leg muscle commands I have ever ridden. 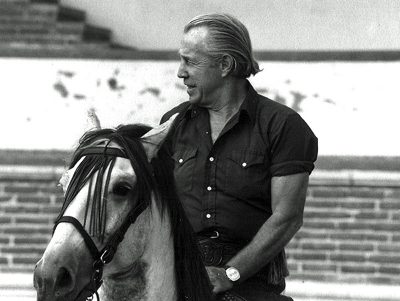 At one point, racing back to the stables after winding around the trail near Train Town and Griffith park, Budd’s saddle came loose and he suddenly leaned dangerously and came within inches — literally — of slamming his head into a telephone pole’s metal step.

When I was done riding and helped remove the saddle.  Budd said to my horse, “What do you say to Robin?  How did he ride you?”  And that magnificent horse reared up and loudly clanked its fore-hooves together several times!

My movie was never made.  Strother Martin wanted to play the lead of an insane preacher.  Kenny Loggins recorded a demo of an original song I helped write, but still the movie somehow never got studio traction especially after “Buck and the Preacher” became available Maybe it was the risk of doing business with Budd.  I think the studio no longer trusted him to remain sober.  I never saw Budd drink or drunk.  But I did get an unusual friendship and enjoyed location scouting in Baja with Budd and Mary and watching Budd fight,fully costumed, on horseback in a Tijuana arena.  He was grace personified.

Budd was enthusiastic about jumpstarting his now dormant “career. We went to an industry screening of “Jeremiah Johnson” and I recall how angry Budd got at the details that were inaccurate of how a mountain man would really conduct himself.  He ridiculed the scene when Redford, while it’s snowing, steps off his horse and into a creek.  In the theater, Budd loudly told me all the problems that dumb move would create. 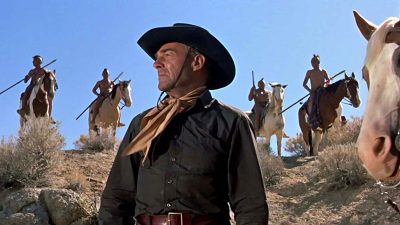 I remember finally seeing the bullfighting documentary Aruzza, the film Budd obsessed over for so long.  I was disappointed.  It seemed way too clean and sterile.  Cold almost, but kept it to myself. Now I realize it was an elegant, painterly tribute to the refined, cooly controlled art of Boetticher the filmmaker as well as the Aruzza thebullfighter.

One of the last times I saw Budd in person was in his condo off of Fountain in Hollywood.  He had just gotten out of the hospital after going on a bender and falling onto — and into — a glass coffee table and badly cutting himself. When I walked in, I was startled at his condition and how badly he was injured.  He looked me straight in the eye and said, “Hey Rob, look, I got gored.”  It was not a joke.  And I didn’t laugh.

Budd was the real deal and I’m convinced Randolph Scott truly embodied him on screen.  For Budd, I think life was about facing fear and not flinching. It was irrelevant if one got gored or not.

What are you watching?  What are you most looking forward to seeing?  Do you feel safe going to a theater?