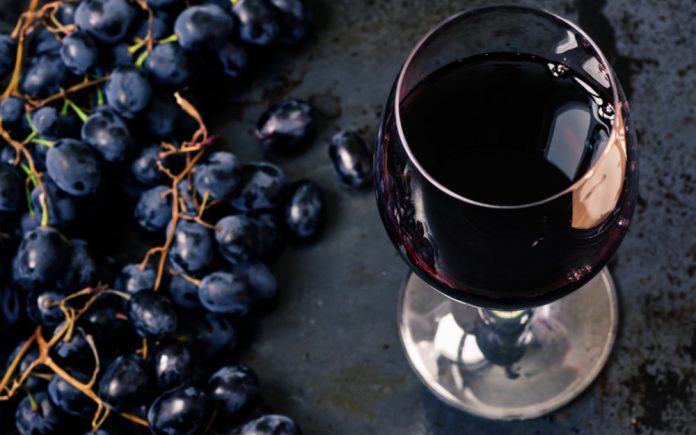 It’s an interesting thing; usually American wine lovers will anglicize French varietals and pronounce them, well, like Americans. So you would think that when we say Cab Franc, we would pronounce “franc” like it rhymes with “yank”. But we’re saying it like the French do—as it rhymes with “honk”.

Anyway—the Cabernet Franc grape is one of the most important grape variety in the world, especially in wine history. It turns out that Cab Franc is not only the “father” of the Merlot grape, and, the Carménère grape, it is also the “father” of—you guessed it, Cabernet Sauvignon! (and as you would well assume, the “mother” grape of the union is Sauvignon Blanc—yup! the white varietal!).

You big Bordeaux fans already know that the Cab Franc grape is one of the six grapes allowed to be blended in a red Bordeaux wine. On the left bank—the Latours, Lafites, & Mouton Rothschilds, you deal primarily with Cab Sauv, Merlot, Petit Verdot, and a little Malbec and Carménère. On the right bank, such as Saint-Émilion, it’s pretty much all Merlot and Cab Franc—the Cheval Blancs, Le Pins & Pétrus.

Indeed, the Château Cheval Blanc’s vineyard is two-thirds Cab Franc! And of course, you large Loire Valley fans do probably know that Chinon is the red wine off the Loire River made from Cab Franc. And the famed Rosé d’Anjou, is the rosé made from the Cab Franc red fruit. So if you’ve drunk much French wine in your life—you’ve probably had a good share of Cab Franc—just accept it!

I love the fact that Cab Franc has so many regional names, which is indicative that this grape has been around a long time and in many different places. If you were to Google Cab Franc, you would find over 40 different names around the world for the grape: some good names to know—for some reason or another, will include Ardounet, Bidure, Boubet, Bouchet Franc, Bouchy, Breton, Burdeas Tinto, Cabernet, Cabernet Gris, Carmenet, Fer Servandou, Gamput, Gros Bouchet, Messanges Rouge, Verdejilla Tinto—it does seem to go on and on and it’s fun for some folks.

The webpage, Travel By Glass, handles a comparison: “Curious how Cab Franc vs Cab Sauv compare? These two red wine grapes have a very different following among wine drinkers. Many are passionate about Cabernet Sauvignon, but far fewer people get excited about Cabernet Franc. In reality, both of these grape varieties make elegant wines.

“In comparison to the bolder Cab Sauv, Cab Franc wines tend to be of light or medium body and are lighter in both color and tannin. The wines generally mature earlier. Cabernet Franc is sometimes associated with an herbaceous, almost green aroma, and possesses an outward expression of fruit.

“The red wines tend to be light in color saturation, well-structured and highly perfumed, with aromas of raspberries and red fruits. These are wines intended for early to medium-term drinking.

Most wine drinkers focus on fruity flavors first in their wines: “Cab Sauv wines are usually defined by blackberry fruits such as black cherry, blackberry, and black currant. You’ll often notice green bell pepper and other herbal notes. When the wine is aged in wooden barrels like oak, you’ll also notice spice, tobacco, and vanilla notes.

“Cab Franc is about red fruit flavors such as raspberry, cherry, and strawberry. In common with Cab Sauv, this red wine variety also has bell pepper notes. Many wine drinkers also enjoy the savory elements of Cab Franc.

“Cab Franc wine typically has a medium-high acidity level, while Cab Sauv is typically considered a lower acid wine. The difference in acidity impacts wine pairing choices and the range of foods that work with each wine.

“It is tough to generalize alcohol percentages because winemakers and climate significantly impact alcohol. As a general rule of thumb, Cabernet Franc tends to have a medium level of alcohol, 11.5-13.5% ABV. In contrast, Cab Sauv wine can have an average alcohol level up to 15-16% in some cases.”

A young Cab Franc has a distinctly herbal quality and tends to pair well with dishes flavored with herbs, especially dill, fennel, rosemary and tarragon. Think chicken with herbs like roast chicken with herby crème fraiche and herb-crusted rack of lamb. The wine also does very well with grilled vegetables: usually red wine has problems with asparagus, artichokes, and broccoli, but grill these veggies and Cab Franc shines!

Okay—our Cab Franc pick of the month is one of our favorite brands: Cakebread Cellars 2019 Cabernet Franc ($65). Definitely a treat considering the price. Grown at Suscol Springs Estate Vineyard atop rocky, well-draining soils in the cool Southern reaches of Napa Valley, the combination of Pacific fog from the nearby San Pablo Bay and bright sunshine combine to yield grapes that are impeccably balanced offering a combination of ripe fruit notes, bright aromatics, robust tannins, and refreshing acidity.