Now that most of us are settling back into our comfort zones after those crazy holiday affairs, it’s time once again to think about and review what wines we simply went ga-ga over this past year.

We all know of course that putting together a list of the “top ten” or “top twenty” or “top whatever” is generally subjective—if not humorously so.  I mean how do you like a wine after you’d just wacked your knee at the table or bit hard into your tongue or got some of your Jack-in-the-Box taco drippings on your new shirt.  Sometimes it’s tough being reasonably objective.

And especially with wine, we all know the story where we’ve traveled abroad and had our socks knocked off with one of the quaffs of our lives, only to be just pleasantly pleased after shipping the wine home and sipping it with less than enthusiastic friends.  Oh well—at least you’re sharing.

But with award season heading our way, no one is going to leave us vino lovers in the “Rutherford” dust. We can match the arts and sciences with our own top picks of wine that could be literally if not figuratively, the quaffs of our lifetime.

My intention for this week’s column was indeed to list a few top wines.  However once I began with my first pick—apparently, I couldn’t say enough.   Hey—it’s still the new year, we’ve plenty of time to get to more of our favorites.   So below is one passionate wine pick for those wishing to taste a bit of heaven on earth.  We can spend gobs of money on gobs of great wine; but aesthetically, don’t we really enjoy the best wine for the best price out there?  Cheers to that!

For those who’ve never enjoyed an Amarone wine, a bit of heaven does indeed await. Or, if you’ve not delighted in a bottle lately, treats are on the way.  The wine is from Italy and its full name: Amarone della Valpolicella.

It’s an Italian red wine that is dry, but enchantingly provides illusions of sweetness. The irony goes on by the fact that “amarone” translates to “the grand bitter”. So what is it? Sweet? Bitter? Fruity?—well, we’ll get to the fruity in a moment.

What adds to the romance in the production of this wine (apart from its vineyard home in Verona, where Romeo & Julietta traipsed passionate) is the unique style where the newly harvested grapes are laid upon straw mats in a wine cellar room and left alone well into the winter months in this semi-drying process known as “apassimento”.

This withering gives the grapes a thickness where the natural sugars are concentrated providing complexity but not an enhanced sweetness (the concentrated sugars will turn to alcohol). This shoots the sensual nature of the juice to the stratosphere—flavors, aromas, texture. And to boot, the wine is aged in casks for no less than six years, creating a stable long-lasting structure and making it one of the longest-living wines in the world. 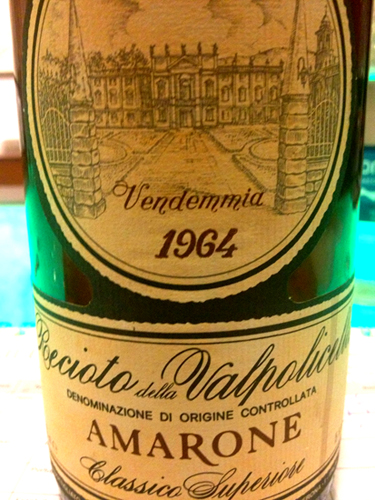 The first time I enjoyed this wine was at my friend’s Chinese restaurant, the Noble House in Rancho Cucamonga back in the 80’s.  I was celebrating something and I had just purchased my first bottle of the prize 1964 Bertani Amarone. It was around $70 back then.

I took it to the restaurant and sat at the bar.  Also sitting nearby, and unbeknownst to me, was a wine steward from another restaurant who had promised his wife, and God, that he would not have any wine during the 40 days of Lent.

I opened the bottle at the bar, looked over to him and of course offered a glass.  The poor guy was beside himself as he explained his dilemma.  I’m no theologian, but I assured him that God would probably forgive him this indiscretion. (He’s heard a lot more grievous broken promises, believe-you-me!)  Well-worn sinners—the both of us, we readily reasoned and presumed on God’s grace.   As to his wife, however, I told him he was on his own.

Around 1988, the Bertani was already 24 years old, but it poured out like a three year old California Cult Cabernet, sturdy and deep garnet red. It breathed an exhilarating aroma of freshly-picked cherries, vanilla, following up with tobacco licorice, and dried fruit.  The full aroma carried into palate along with amazing flavors of figs, light bitter Mexican chocolate, and fine aged cigars. Heavenly!

For those wishing to get a very tasty introduction of this style of wine at an incredible $11, try 2014 Gran Passione Veneto Rosso Appasimento.  It’s a “baby Amarone”—made with fresh Valpollicella that has been mingled with leftover skins from Amarone winemaking. The resulting wine absorbs additional body and flavor, providing a medium-bodied wine with a similar complexity to Amarone. It’s plush and smooth with plum, blackberry jam, cocoa dusk, and leather along with a note of graphite and a nice streak of minerality.

Rick is the valley’s “somm-about-town” and continues to entertain and conduct at various wine events, tastings and restaurants. He can be contacted at winespectrum@aol.com