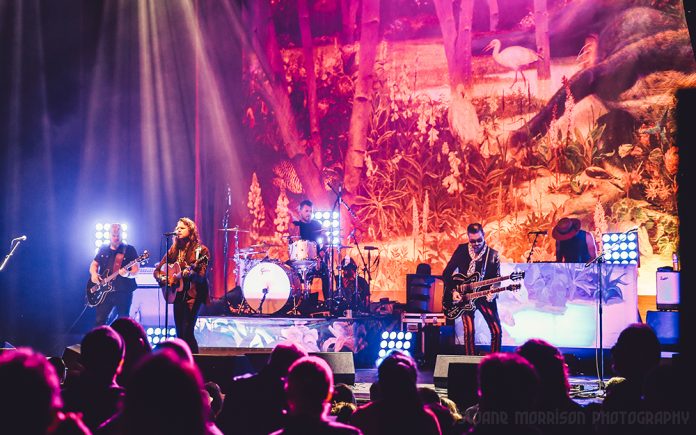 Rival Sons recently played two sold-out shows at The Wiltern in Los Angeles and The House Of Blues in Anaheim, respectively. The Long Beach four-piece, augmented by beardy tour-mate Todd Ogren Brooks on keys, were finishing up a seven-week tour commemorating the 10-year anniversary of their landmark record, Pressure And Time

It was that album that blew open the doors for guitarist Scott Holiday, drummer Michael Miley, original bassist Robin Everhart and front-man extraordinaire, Jay Buchanan. Classic Rockers from AC/DC and Judas Priest to Alice Cooper and Kiss recognized them as kindred spirits, recruiting them as their opening act. Even legendary Led Zep guitarist Jimmy Page name-checked the Sons as his favorite band. 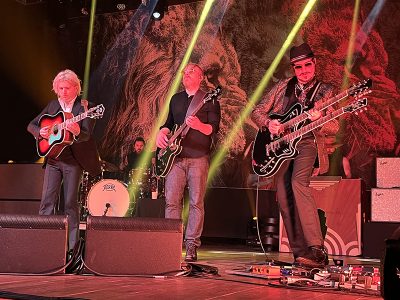 In the last decade Rival Sons have released four stellar records. They’ve been feted in the pages of Classic Rock magazine and Rolling Stone. Although Robin amicably left the band in 2013, the guys recruited their compadre Dave Beste to anchor the low-end. They have supported giants like Black Sabbath, Guns N’ Roses and the Rolling Stones. They even received two Grammy nominations for their 2019 opus, Feral Roots

At both shows the Sons played the crisp and concise Pressure album front-to-back, opening with the the raucously salacious auto-erotica of “All Over The Road” to the poignant and plangent closer, “Face Of Light” In between they were firing on all cylinders. Jay completely channeled Eric Burdon on a particularly muscular version of “Young Love.” Meanwhile, “Gypsy Heart” found Scott unleashing a series of guitar salvos that detonated like smart bombs, while Jay portrayed a carnal conquistador with a serious case of wanderlust. The title track, their original calling card from a decade ago, momentarily shined the spotlight on Miley’s protean time-keeping and featured some spontaneous call-and-response from the audience. 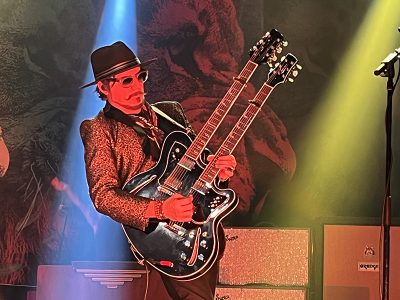 Longtime fans were delighted by smoking renditions of “Only One” and “White Noise,” neither of which received much live traction when the album was originally released. The former, a Bluesy love ballad, relies on some sweet, celestial keys. Back in the day, the four-piece couldn’t replicate that ambrosial sound. Luckily, Todd joined their ranks in 2014.

The latter is a skronky Garage Rocker that presciently railed against a burgeoning technology that conspired to steal our souls; “There’s a message coming to me on my TV screen every time I try to turn it off, it tells me I’m inferior and incomplete and I’m a fool for being satisfied with what I got….There are natives living in the jungle, running wild and naked through the trees, there are satellites above tracking every move to calculate how to sell them what they never need.” 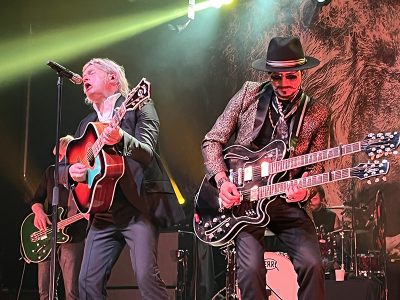 Although the title track and “Face Of Light” have received the most attention over the years, It’s the album’s deep cuts that continue to resonate, painting vivid portraits of an ambitious and hungry young band. Lean and unfussy in more ways than one, “Get Mine” cleverly chronicles the struggles of a starving artist in just a few deftly turned phrases; “I’m done wasting my time, I’m tired of picking off the fleas, I’ve got a coffee can full of liquor store change that I’ve been counting on my knees/Get off the floor, look in the mirror, keep looking that good, some girl’s gonna buy your dinner, got so much money I know I owe, go downstairs and my car is getting towed.” Live, Scott’s stinging guitar partnered with Dave’s fluid bass lines, Todd’s icy keys and Miley’s walloping beat.

The locomotive rush of “Save Me” was powered by Scott’s strafing riffs, Dave’s kinetic throb, and Miley’s pile-driving kick. Jay’s acrobatic yowl limns the laser-focused existence of the artist trying to make his way; “I climbed the mountain and killed I the beast just because they said it couldn’t be done, come home to an empty house got nothin’ eat and I’m still on the run.” On the break, the song briefly turned supersonic as Scott executed a patented Fuzz-crusted solo. Jay’s untethered howl ushered the song to a conclusion. 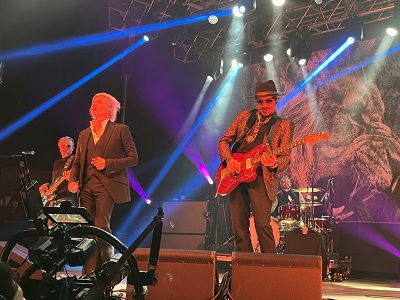 Sandwiched between those two powerhouse cuts is fan-favorite, “Burn Down Los Angeles.” As Miley laid down a triple-time tattoo, Dave fell in line with some rumble-in-the-jungle bass and Scott kicked into the stratosphere, alternating crisp, ricochet riffs with some dirty bottleneck action. Once again Jay wears his angst on his sleeve as he navigates the treacherous landscape of the L.A. music scene; “I come for revenge for my broken dreams, I didn’t come to wait tables or park limousines, I come to get up from my hands and my knees, I come to steal the honey from the killer bees.”

Once they sprinted through the Pressure And Time material, the Sons cherry-picked songs from Feral Roots, as well as 2014’s Great Western Valkyrie and 2012’s Head Down. As their latest and newest effort, Feral received the most bandwidth, beginning with the monster riff-age of “Too Bad,” the hypnotic and expanded wah-wah of the title track and the bludgeoning crunch of “Do Your Worst.” Great Western Valkyrie was well-represented by the thundering Soul salvation of “Open My Eyes” and the sizzling voltage of “Electric Man.”

As the band reconvened, they launched into an achingly pure rendition of “Jordan.” An eloquent meditation on love, loss and grief, the arrangement matches Scott’s keening guitar pyrotechnics, Dave’s molasses-thick bass lines and Miley’s subtle rhythmic punctuation with Jay’s elegiac croon. Since its release in 2012, the song has become a touchstone for fans offering a measure of catharsis. Whenever the band considers retiring it from the road, they receive impassioned pleas from fans, relating how the song has provided comfort during a time of personal heartbreak.

The band wound up the set with another Head Down number, “Keep On Swinging.” Here, busy, buzzsaw guitar riffs collide with tensile bass lines, spooky keys and a rat-a-tat beat, as Jay’s stentorian roar crests on top. The lyrics’ sly boxing metaphor manages to mirror the band’s nose-to-the-grindstone work ethic; “Where there’s a will, there’s a way, I work hard at the end of the day, the Lord helps those, who help themselves/Hey, hey, I keep my head down and keep on swinging.”

While their Wiltern show was an incendiary triumph, the boys managed to top themselves the following night, performing an authoritative set that crackled with a combustible intensity. After weathering a seven-week tour, fraught with mishaps, including some Covid complications that resulted in two cancelled shows, they were grateful and relieved to be crossing the finish line. Jay graciously thanked their dedicated crew and devoted fans, for making it all happen.

In an industry dominated by Trap, Reggaeton and K-Pop, Rival Sons has managed to carve out a niche by imbuing their music with passion, and eloquence. As brilliant as they are on vinyl, nothing compares with seeing them live. Rock N’ Roll ain’t dead, long live Rival Sons.