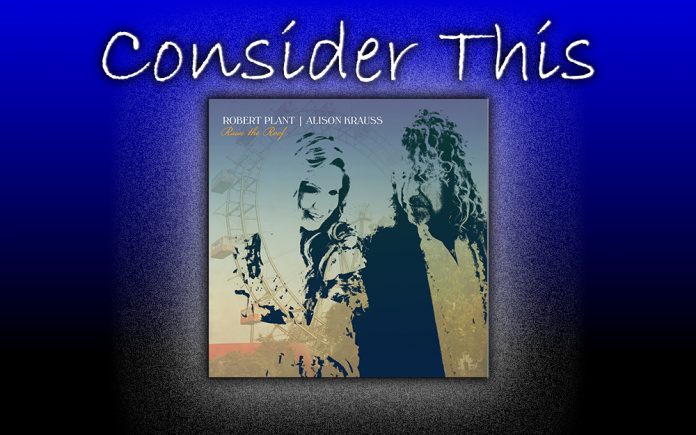 At the start of 2008, Robert Plant forfeited a huge payday and broke a lot of hearts when he walked away from a proposed world tour with Led Zeppelin. He had recently reunited with the two surviving members, Jimmy Page and John Paul Jones, with Jason Bonham, stepping behind the drum kit in place of his late great dad, John. The four-piece played a couple of shows in late 2007, honoring a commitment made to their mentor and president of Atlantic Records, the late, Ahmet Ertegun.

Both sold-out shows, performed at London’s 02 Arena, had been tremendous success, critically and commercially. The band proved they still possessed the prowess to command the world’s attention, and money raised from each concert went to worthy causes. Managers, agents, concert promoters, die-hard Zep fans and even Jimmy, John Paul and Jason were eager to capitalize on the renewed interest. But Robert had other plans.

Three years earlier, he met Bluegrass superstar, Alison Krauss at a Leadbelly tribute. Tasked with duetting on Huddie Ledbetter’s “Black Girl,” they realized the song wasn’t the best fit, but their vocal blend was definitely intriguing. By early 2006, they were in the studio with T-Bone Burnett behind the boards. Their debut collaboration, Raising Sand arrived in late 2007, and rather surprisingly, shot up the charts.

The curious combination of the Golden God of Rock and the doyenne of Country/Blugrass, appealed to the latte-sipping, NPR crowd. It also didn’t hurt that T-Bone hand-picked a set of eclectic songs from disparate sources like Tom Waits, late-Byrds vocalist Gene Clark, Townes Van Zandt Mel Tillis, Doc Watson and Rowland Salley. But it was the undeniable and unexpected vocal chemistry between Robert and Alison that proved their pairing was more than stunt casting.

On the surface, they were truly an odd couple. Robert, the self-proclaimed Black Country Boy from Worcestershire, England, was born in 1948 and became obsessed with the Blues and the primitive rumblings of Rock & Roll at a young age. In 1968 he partnered with ex-Yardbirds guitarist Jimmy Page, studio musician John Paul Jones, and boyhood pal, drummer John Bonham. As Led Zeppelin, the four-piece proved formidable. Robert was truly the archetypal bare-chested, Dionysian front-man. Originally dismissed by the critics, the band attained instant popularity. Over the course of seven studio albums, they rode out the ‘70s a commercial juggernaut. Burning the candle at both ends was de rigueur during that decadent decade and Led Zep were no strangers to excess. As the ‘80s dawned, John Bonham expired from pulmonary aspiration following a night of heavy drinking. Following his death, Led Zep chose to disband.

Robert jumpstarted his solo career in 1982. Although he never scaled the commercial heights of his former band, he achieved a bit of critical acclaim, carving out a comfortable niche. In between solo records, he reunited with Jimmy Page as part of the Honeydrippers, then for an unplugged project that morphed into a tour and a Page & Plant studio album. Born in 1971, Alison grew up in Champaign, Illinois. At her mother’s insistence, she began studying classical violin at age five, while her older brother, Viktor picked up piano and double bass. She was exposed to Folk and Country as a kid, along with Top 40 hits from the likes of Gary Numan, Foreigner, Bad Company and Electric Light Orchestra.

Her mom bought her a Bluegrass Fiddle instruction book, and Alison was able to figure out complex riffs by ear. Signed to Rounder Records, she made her solo debut at age 16. By the early ‘90s, she was a mainstay on the Country and Bluegrass charts. In the ensuing years she has received 37 Grammy nominations, winning 22 times. She is ranked fourth behind Beyonce,’ Quincy Jones and Classical conductor Georg Solti for most Grammy wins overall.

Rather than commit to a tour with Led Zeppelin, Robert chose to follow his muse and take his collaboration with Alison on the road. His gamble paid off, not only did “Raising Sand” debut on Billboard Top 200 chart at #2, it held the same position on the Country chart. It swept the 51st Grammy Awards, receiving five nominations and winning them all. In 2009, the pair reconvened with T-Bone to make a second album, but the spark wasn’t there. So, they backed away from the project and each went on to other things. Recently, the stars aligned, Robert, Alison and T-Bone returned to the studio to record their long-awaited follow-up, Raise The Roof. The album opens with a shimmery version of Calexico’s “Quattro (The World Drifts In).” Strummy Jarana Jarocha riffs partner with astral dolceola notes, thready bass, searing pedal steel, stacked guitars, percussive handclaps and a modal backbeat. Robert and Alison’s vocals intertwine, achieving a familiar, yet ethereal alchemy. The lyrics finesse what Janis Joplin referred to as dem ol’ kozmic blues; “In a light, ashamed and humiliated, in a time sacrificed for the sake of trade, the soul is bent, feels the weight of truth falling through/Left behind, no choice but to run to the mountains, where no poppies grow, you have to hit the ground running.” Guitars slash and burn on the outro, suggesting the spirit hasn’t been vanquished.

This record, more or less, follows the same formula as Raising Sand. Each take the lead on an equal number of tracks. Alison is up first, acquitting herself beautifully on the Everly Brothers chestnut, “The Price Of Love” Originally, a defiant and slightly spiteful, fraternal stomp, here’s it’s stripped-down and lovelorn, slowed to a narcoleptic groove. Tinkling percussion and ambient noise is supplanted by clandestine guitar chords, sleepwalker bass, and a clackity beat that wraps around her plaintive croon. On verses like “You talk too much, you laugh too loud, you see her face in every crowd, kiss one girl, kiss another, kiss ‘em all but you won’t recover/You’re dancing slow, you’re dancing fast, you’re happy now but it won’t last,” unfurl like an inner monologue. Robert expertly shadows her on the chorus. Guitars skronk and skitter atop fluttery banjo and plangent mandolin on the break.

She takes a deep dive into the abyss on”Last Kind Words Blues,” from seminal female Blues musician, Geeshie Wiley. A cracked Country Waltz, the tune is powered by thick Resonator riffs, courtly mandolin, stickity banjo, knotty cello, wiry bass and stealthy fiddle all in ¾ time. Alison evinces a world-weary ache as she imparts her Daddy’s final words; “If I get killed, if I get killed, please don’t bury my soul, I prefer you leave me out, let the buzzards eat me whole.” Again, Robert steps in on the chorus adding some shaggy harmonies.

Things are slightly less dire as she attempts to redirect heartache on Merle Haggard’s classic lament “Going Where The Lonely Go.” Wistful electric guitars, spidery bass and willowy pedal steel are bookended by a shuddery rhythm. The ache is palpable as she realizes these endless distractions can’t assuage heartbreak; “Making up things to do, not running in all directions to find you, I’m just rolling with the flow, going where the lonely go.” Once again Robert rides to her emotional rescue on the chorus.

Finally, she displays her sultry side on the Betty Harris’ Big Easy Soul song, “Trouble With My Lover.” The song lands somewhere between Peggy Lee’s “Fever” and Aretha Franklin’s “Dr. Feelgood.” Frisky requinto notes are matched by prickly baritone guitar, thumping upright bass and a tip-toe beat. She’s got it bad, for a bit of a bounder; “When he puts his arms around me, way in the middle of the night, you know it fills me up with a kind of delight, ooh, that man’s alright.” Shivery requinto notes lattice over spiky baritone licks on the outro.

Robert returns to his Ye Olde English roots on the Folk-flavored “Go Your Own Way.” Jangly acoustic guitars intertwine with spatial electric riffs over a kick-drum beat. Even at age 73, his voice still has the power to thrill on this bittersweet farewell. Just the way he bends notes on phrases like “woe is me” or “I want to die” is worth the price of admission. Muscular guitars and lilting pedal steel on the break manage to magnify the misery.

Co-written with T-Bone, “High And Lonesome” is Zep-tastic in all the right ways, recalling the crosscut urgency that characterized his former band’s best songs. Shards of guitar, swoony Melloton and bowed bass connect with rat-a-tat handclaps and a propulsive beat. Even the lyrics reflect his days as carnal conquistador, he pursues um, love, sans restraint; “I shall not rest upon the highway, I will not tire or despair, I shall conspire I will be there, I’ll make a deal, I’ll dance in hell, I’ll sing out loud and louder yell, I will open every, every door yeah.” Phased and dusted guitars crest over the break, before the entire enterprise shudders to a stop

The best tracks stack back-to-back, smack in the middle of the record. They offer a rollicking take on “Can’t Let Go.” Written by Randy Weeks, the song was a huge hit for Lucinda Williams, off her watershed “Car Wheels On a Gravel Road.” Reverb-drenched electric guitar, stinging acoustic guitar and walking bass lines are tethered to a tom-tom heavy tribal tattoo. Robert and Alison’s honeyed harmonies nearly camouflage lyrics that can’t quit a cratered relationship; “I’m like a fish out of water, a cat in a tree, you don’t even want to talk to me, well, it’s over, I know it but I can’t let go. Their blithe and sunny vocal blend, fuses with the lithe and elastic Cha-Cha-Cha arrangement and the results are electric.

Alison is positively dreamy on Bert Jansch’s “It Don’t Bother Me.” The spare and spectral Scottish Folk ballad is reconfigured, layering in brushed percussion, hollowed-out bass, chunky electric guitar, haunting pedal steel, celestial marxophone and quavery dolceola. Alison’s vocals tightrope between feathery agility and tensile grace, as Robert darts in and out on the defiant chorus; “You twist my words like plaited reeds, to mark your gain and help your needs, but it don’t bother me, what you say.” The arrangement nearly levitates on the break as it builds to an insistent crescendo.

On Ola Belle Reed’s “You Lead Me To The Wrong,” the Black Country boy slips into Country Darkness. Davening on the opening notes, Robert channels one of his biggest influences, Egyptian singer Oum Kalthoum, over sawing fiddle and tremulous electric riffs. Croaky percussion, rippling acoustic guitar and burly bass lines add to the backwoods verisimilitude. Bewitched and betrayed, a crime of passion leads to the gallows; “You promised me that we would be wed, on this I laid my money down, you were seen a’courtin’ my best friend, you caused me to shoot him down, you caused me to shoot him down.”

The record closes with the Gospel crunge of “Somebody Was Watching Over Me.” One of the final songs written by Gospel-Soul giant, Pops Staples, it’s accented by barbed guitars, menacing bass, Honky-Tonk piano and a martial kick. Spiritual lyrics speak to a higher power; “My strength was put to the test, my weakness was put to rest, looking now I see somebody was watching over me.” It’s a hypnotic end to a potent record.

Raise The Roof exhibits the same ephemeral magic and crackling energy that characterized Raising Sand. 14 years between albums is a long time. But it was well worth the wait.