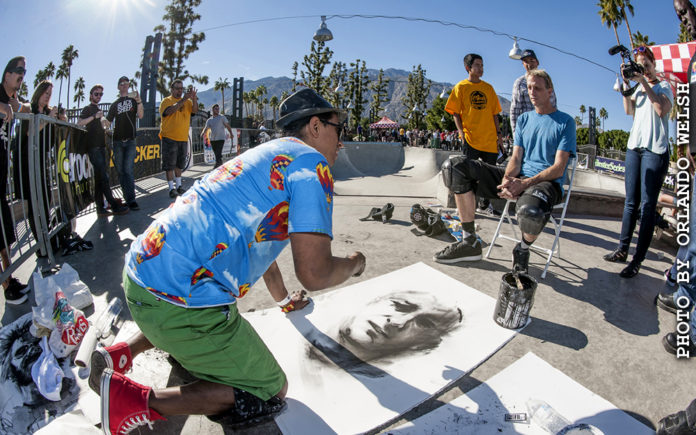 Los Angeles artist Robert Vargas will be visiting Palm Springs to attend the El Gato Classic skate event on January 26 and 27, created by Eddie “El Gato” Elguera. Like in past years, Vargas will be doing live portraits of the skaters at the events but this year he will also be showcasing his “Legend Series” of some legendary skateboarders saying, “I wanted to wait for the right moment… I think that showing them at the classic is perfect because the audience would appreciate them.”

Vargas has done portraits of many notable skateboarders including Eddie Elguera, current Coachella Valley resident and founder of this event; Tony Hawk; Christian Hosoi; and Steve Caballero. “Eddie invited me to show some of those portraits that I’ve done and a good amount of those guys are going to be present, there at the classic. I’ll show maybe 12 to 20 portraits of some of the greatest skateboarders of all time that have sat for me,” Vargas says.

Vargas has done quite a few portraits of skateboarders both at previous years’ El Gato Classic and outside of it. “I’m the portrait artist for the skateboard hall of fame. When people get inducted, I do all the portraits… I love what Eddie’s doing for not only preserving the history of skateboarding through his classic but also showcasing the future with some of the up and coming talent,” he says. He also has had a personal interest in skateboarding since he was a kid, saying, and “I used to have a halfpipe in my backyard and I used to do skate shows even going as far as selling tickets when I was like 12… forever a young entrepreneur. Painting was always my first love, but I always loved skateboarding… because it was something that I could just do on my own, I didn’t need to… gather a group of guys to play sports or whatever, it could just be me and my board. I kind of liken that a lot to my artwork; I’m able to kind of be self-contained. So fast forward now a few years to like being able to do my passion… and everyone else involved do their passion and we’re able to kind of cross pollinate and just be creative together in the same space, it’s pretty cool.”

Vargas is well known in Los Angeles and around the world for both his portraits and his murals. “I have been part of the downtown art cannon for the last 15 years and I grew up a mile from downtown LA, so this is home…. I just did a mural in Dubai… they’re all very site specific… I usually like to paint someone from the neighborhood,” he says. “There was no mural of The Doors, of all four members in Venice, believe it or not, before I did it. There was no mural of Tony Alva in Venice before I did it. There was no mural of Mike Muir from Suicidal Tendencies. Those people, I believe, are hugely important. It’s one thing to do something in memoriam but it’s another thing to paint someone when they’re alive so we can show how much we love them and appreciate them.”

Currently, Vargas is working on a mural which he says is the biggest mural in the world painted by a single artist. “The great thing about public mural work is that you’re able to reach a much larger audience… people that don’t go to galleries, that don’t go to museums… or kids who don’t have access… if I have the right message then I feel like the right message then I feel like the right mural can transcend a location. The portraits are much more specific because that’s hanging in a home, that’s hanging in a gallery, only a specific audience gets to see that. However, those portraits I usually paint live,” he says.

He will also be painting live at the El Gato Classic, with skateboarders sitting for portraits between sessions in front of an audience saying, “They’re doing their thing on the spot in the moment, very organic, very raw. I’m doing my thing with no formula, very much in the moment, raw. Those drawings take about 10 to 15 minutes to create, I draw them very very fast… drawing live everyone gets to be a part of that.”

Vargas calls Elguera “the keeper of the flame” when it comes to passion for skateboarding and its history. “I look forward to it every year because I’m able to not only connect with the skateboard community but also with the desert community that comes out,” he says.

The El Gato Classic will take place on Friday, January 26 and Saturday January 27 in Palm Springs. Tickets and more information can be found on elgatoclassic.com.