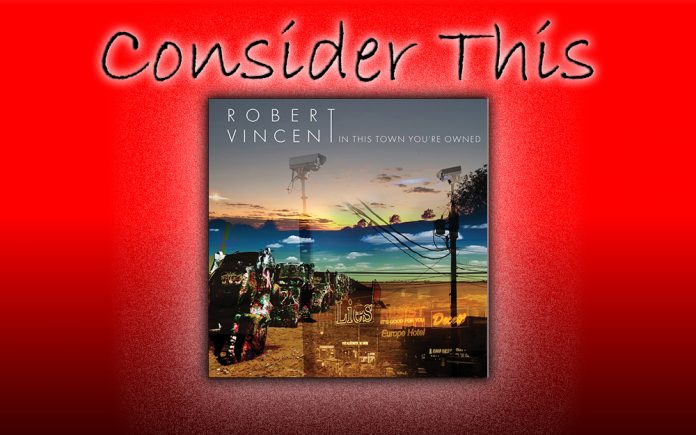 That’s singer-songwriter Robert Vincent looking for a little salvation on “Cuckoo,” a track from his new record, In This Town You’re Owned.

Robert Vincent is a storyteller, plain and simple. He just has a knack for cloaking his stories in warm and enduring melodies that are buttressed by sharp arrangements and instrumentation. He grew up in the seaport town of Liverpool, England. Best known the birthplace of the Beatles, the Merseyside city has always been exposed to traditional American music idioms such as Jazz, Blues and Country, thanks to sailors that brought records home from their travels.

Growing up in the Hamlet of Crosby, Robert’s parents played all kinds of music around the house, Johnny Cash, The Beatles (obviously) and Pink Floyd.  As a kid he gravitated toward the music of Waylon Jennings and Emmylou Harris. A grade school teacher recognized his musical talent and encouraged it. By his teen years he played in a series of cover and original bands. At that point his tastes had expanded to include Grunge-y chart-toppers like Nirvana and Pearl Jam as well as Brit-Pop sensations like Blur and Oasis.

After a while, the band-dynamic became untenable and about 10 years ago, Robert decided to go it alone. His solo debut, Life In Easy Steps arrived in 2013 and was immediately embraced by fans and critics alike. His Country-Folk blend has been favorably compared to Bruce Springsteen and Steve Earle, although some naysayers groused that a British musician shouldn’t be co-opting an “Americana” sound. But that notion is patently absurd. The roots of Country and Bluegrass can be traced to English, Irish and Scottish immigrants introducing ballads, jigs and reels to their adopted homeland, America.

In the midst of recording a follow-up, Robert won U.K. Album Of The Year from the U.K. Americana Music Association. Released in 2017, I’ll Make The Most Of My Sins doubled down on the same winning formula, garnering more critical acclaim and expanding his growing fan base. Last year he created a bit of buzz when he performed at the annual Americana Fest in Nashville. Teaming up with award-winning producer Ethan Johns (Paul McCartney, Laura Marling, Ray Lamontagne, Tom Jones and Jayhawks, to name a few), he returned to the studio. The result is his third album, In This Town You’re Owned.

The album opens intimately with ambient studio chatter and a “1-2-3” count off. Swooping acoustic guitars lattice over pastoral organ colors and a kick-drum thump. On the surface, the lyrics seem to limn the restless claustrophobia that accompanies small town living, but in reality, it’s a brittle rebuke of social media, which has become more toxic than gossip over the clothesline. As the instrumentation builds, descending fiddle notes echo and sway, encircling burnished piano and sturdy stand-up bass. The choice is made clear; “You can parade in the shadow of mediocrity, chase the light of day with your fantasies/Don’t take this as a joke or even parody, in this town you’re owned.”

Both “The Kids Don’t Dig God Anymore” and “The End Of War” match ambitious themes to protean melodies. The former weds churchy organ that wobbles with uncertainty, to hushed guitar riffs, lowing bass lines and a deliberately metronomic rhythm. Make no mistake, the lyrics aren’t advocating for organized religion, rather, they’re mourning a lost sense of faith and community, as people delve deeper into their devices, as a way to forge instant, albeit anonymous connections.

As the song gains momentum, hard questions don’t engender easy answers; “So how do we right such a wrong, how do we heal? In darkness we run to the light, but his light is concealed.” Feathery fiddle accents are shadowed by stately piano and wordless harmonies on the break. Robert concedes maybe there’s a different sort of solution at hand; “The hope is we find our own peace, together we wrangle the beast, kids don’t dig God anymore, hell, maybe they’re right.”

Appropriately, the latter track is propelled by a martial cadence, warm acoustic arpeggios, rippling piano and a wash of organ. Slipping into the skin of a young soldier marching off to war, Robert’s vocals ache with tenderness as he promises “There’s a life at the end of the war, if you like I’ll still marry you then/There’s a light at the end of the war, I hope it’s you.” But as the song progresses, locking into a fife & drum-y groove, it becomes clear that the song is a stinging commentary on the futility of war; “Now it’s time we look back and remember all of the fallen, surely now we can learn and take back some of the grieving, but around this blue world people bicker, barrack and beat us, who can blame them with 24 hours of media to feed us/Till we strive for the stars and not just mars and realize it’s meaning, only then there’ll be peace in this world free of supernatural leanings, I’m not against Mr. Jones having faith in his Sunday school readings, but mankind has a bind and we need to see the future clearly.” Cushioning the lyrics’ somber tone, the gorgeous instrumental outro features gentle piano underpinnings, lilting mandolin and a rock steady rhythm.

The best songs here find Robert coloring outside the lines. Take “The Ending” a South Of The Border charmer anchored by courtly Spanish guitar, fluttery mandolin, rustic accordion and lush mandochello. The lyrics’ central conceit is love finds us and alleviates the pain when we least expect it.

Expansive and mordant, “Husk Of A Soul” opens unexpectedly as bloopy Rhodes notes give way to sparkly guitar and a thwacking backbeat. Shuddery organ and wily slide guitar underscores this romantic post-mortem. Robert’s soulful vocals lean closer to Al Green than say, Sturgill Simpson. Here he cuts to the quick, asking an ex; “Can you please remind me! Were we once in love?”

On “I Was Hurt Today, But I’m Alright Now,” he flips the script, as he bares his soul along with his insecurities. Strummy acoustic riffs connect with elegant piano notes, layering in twinkling mandolin, tart organ runs, shaker percussion and a chugging rhythm. Here, he pledges “I will take a perfect sunset, paint it on your wall, I will fake the banker’s signature and bring you all the spoils….just please don’t leave me.” Piquant mandolin blends with plaintive piano on the bridge as he searches for some emotional rescue.

“Conundrum” is a bit of a back-porch ramble. Jangly guitars collide with bucolic banjo, lonesome lap steel, piano, Hammond organ, mandolin and stand-up bass. The lyrics offer some vivid imagery; “I doubt there’s ever been a reason, to screw it all and just take off, It’s like some effervescent pungent potion that makes you choke/But you must swallow it without reaction, like you’re staring out admiring a view, there’s a weakness in the lack of knowledge we’ve consumed.”

Finally, there’s the Rockabilly strut of “My Neighbour’s Ghost.” Slap-back bass ricochets around twangy acoustic riffs and stuttery electric licks, bookended by a rollicking rhythm. The lyrics provide something of a sideways carpe diem; “Life will take you if you like it or you don’t, so you must live it.” Somewhere Buddy Holly, Elvis Presley and Phil Everly are smiling.

The album closes with the Folk-flavored “If You Were You.” Fleet acoustic fretwork frame pliant piano, filigreed mandolin, spidery bass lines, honeyed organ and sparse percussion. Robert’s warm and affable vocals belie lyrics that tender a withering assessment of a hubristic autocrat; “There’s a need in you to be the only person in the room, a stifling reflection of what it is you’ve become/There’s a sadness in your eyes as another part of your heart dies, it must be lonely, man.” It’s up to the listener to decide if excoriating couplets like “The sight of your own reflection must bring bile to your throat, if you sought your own reflection, would your ego learn to cope/Your personality dictates that you must rant and you must rage until you get your way,” address a certain self-proclaimed “very stable genius” or his bumbling British doppelganger. Either way, it’s an uncompromising end to a great album.

“In This Town You’re Owned” strikes a balance between the personal and the political. His songs are at once intimate and universal, as comfortable as an old jean jacket. With this record, Robert Vincent cements his reputation as a fresh Americana voice.