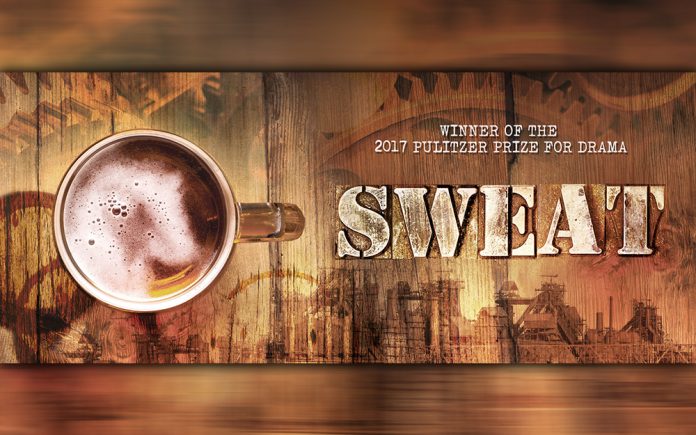 A good drama is like watching layers of meat being ripped from the bone by a hungry wolf.  It feeds the soul and satiates the thirst for insight to and knowledge of the human condition.

When Lynn Nottage wrote her Pulitzer Prize winning play, “Sweat,” she said that she felt “Sweat,” was the American story.  The setting is Reading Pennsylvania, but it really could be any pos-industrial city across the landscape.  Nottage’s script will remind you of the power and impact of theatre.

“Sweat,” currently in production with DezArt Performs, is the story of Mid-West America.  A place where lively-hoods are dependent upon the factory production line and dreams are lost in the midst of the noise and monotony of just getting by.  Sweat, is a non-liner piece opening in 2008 as Chris, (Cortez Johnson,) and Jason, (Corydon Melgoza,) meet individually with their parole officer, as they are released from prison after eight years of incarceration.  The story shifts back to the year 2000 as the story unfolds in a local tavern in Reading Pennsylvania.  It’s a neighborhood joint for factory workers and the audience is introduced to the heartbeat characters who are the lifeblood of the narrative. 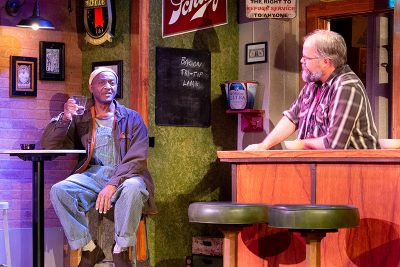 Jessie, (Melanie Blue,) Cynthia, (Desiree Clarke,) and Tracy (Teresa Jewett,) are life-long friends who have followed their parents and grandparents into the factory and believe they will be there until retirement, after which they hope to finally have the freedom to carve out a slice of their shelved dreams. Brucie, (Cary Thompson,) is a laid off worker, Chris’s father and Cynthia’s ex-husband. His obvious decline at the onset of the show is a foreshadowing of what is to come for many others. Stan, (Mike Truelock,) is the bar manager who attempts to provide an outlet and keep the peace for his regulars.   When the Factory locks out it’s employees without allowing the Union fair negotiations, the result is catastrophic. 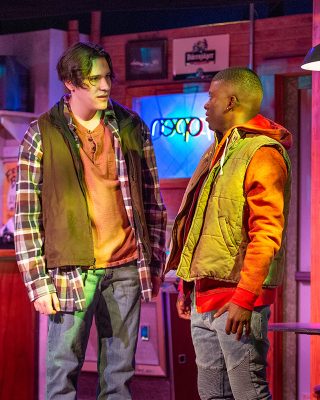 The story is mesmerizing.  The actors are phenomenal and the production values are exceptional.  Michael Shaw, directs this story of middle America and exemplifies why DezArt has become a top tier theatre company.  The staging is intentional and each movement a revelation of who these characters are.   The relationships between Chris and Jason and their mothers, life-long friends Cynthia and Tracey, is really the heart and soul of this story.  Melgoza, Johnson, Clarke and Jewette were all incredible in their portrayal of average people trapped by the fate of their circumstances.

Race, socio-economic levels, jealousy and fear all work in unison to destroy the fabric of family and friends, who are shattered like fragile glass, by the unpredictable and often unfair realities that is forced upon them. 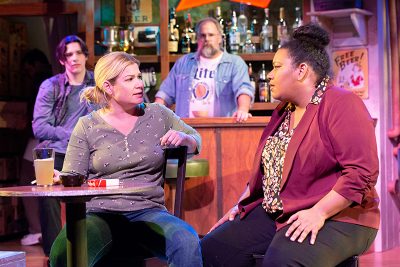 Thomas L. Valach’s set design is absolutely perfect.  Every detail presented in realistic detail.  Bravo to all of the backstage artists, Phil Murphy – Lighting design, Frank Cazares – Costumes, Clark Dugger – Sound and Selene Colon – Hair & Make up.  All came together in portraying the raw and gritty reality of a Reading Pennsylvania factory town.

Sweat, is running through March 8th and is a show not to be missed.  There is a reason why this drama was awarded the Pulitzer Prize.