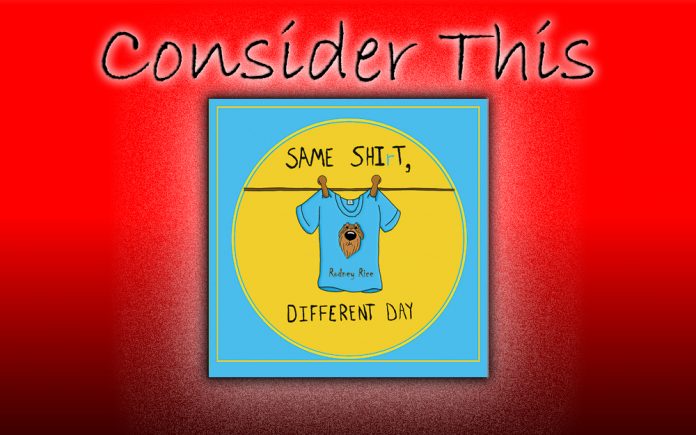 That’s Rodney Rice, looking for some peace of mind (and maybe a piece of something else), on “River Runs Backwards,” a song from his new album, SAME SHIrT, DIFFERENT DAY.

A native of West Virginia, Rodney and his cousin Tyler both picked up guitars when they were about nine years old. Woodsheding at their grandparents’ house, they received encouragement and fielded requests for classic Country songs from Hank Sr., Willie and Waylon.

Growing up in the small city of Morgantown, Country radio and Gospel favorites were his constant companions as a kid. By raiding the cassette collections Uncles and older siblings and perhaps “forgetting” to return them, he set out on a path of musical enlightenment. Bob Dylan, the Grateful Dead and Tom Petty became early touchstones. Just as puberty hit, he attended his first concert. Seeing John Prine was a revelation. The revered singer-songwriter (who recently passed away from the Coronavirus), displayed an ease and intimacy with his audience that Rodney wanted to emulate.

He received some formal musical training, his initial goal was to play the Grateful Dead’s 1981 live album, Reckoning, in its entirety. But patience and adolescence don’t really mix, and pretty soon he was blowing off music lessons and writing his own songs.

Even though the venues of Morgantown didn’t really welcome bands playing original material, Rodney and Tyler began plying their trade as Buford & Pooch, a moniker derived from nicknames their salty grandpa had given them. They honed their skills playing juke joints, bars and Honky Tonks, but the band reached its natural conclusion once the cousins finished high school. Before he began college at West Virginia University, Rodney crisscrossed the country earning his keep as a kayak instructor.

Once he had completed his Geology studies, he relocated to Texas for work. Although he missed the rivers and mountains of his hometown, the trade-off wasn’t too bad. Austin, Texas is known for its thriving music scene. It was there Rodney became reacquainted with a family favorite, Billy Joe Shaver. The Outlaw Country outlier, first made a name for himself as a songwriter in Nashville. His songs became hits for Waylon Jennings and David Allan Coe, among others.

Released in late 2014, the album garnered positive reviews and a loyal fanbase. His songs walked the line between Folk and Country, mixing sharp observations with memorable melodies. Recently Rodney and his wife moved to Denver, Colorado, but he still found time to return to Congress House to record another album. The result is SAME SHIrT DIFFERENT DAY.

The record gets off to a caustic start with “Ain’t Got a Dollar.” Barbed-wire guitars wrap around sinewy bass lines, wily Hammond B3 notes and an insistent kickdrum beat. Rodney’s out on the pavement, singing about the government, busking just to make ends meet. The first verse offers a withering assessment of our current Cheeto-In-Chief; “A man from the TV and now he’s President, the bible belt thinks he’s heaven sent/Because he’s made lots of money, he’s gonna take our troubles away, by the sound of that, my troubles are here to stay.” As he ponders the plight of our veterans, and pays homage to the woman who “gives me shade summer, keeps me warm in the winter time,” guitars shudder and swirl, bookending a scorching slide guitar solo.

Not unlike fellow Texas Troubadours Steve Earle and Todd Snider, Rodney has found a way to balance the personal and the political, without ever sounding sappy or solipsistic. No matter the circumstance, his wry humor acts as a through-line for each narrative.

Take “Free At Last,” a twangy two-step powered by tart mandolin runs, sawing fiddle, burnished dobro notes, slapping bass, intertwined acoustic guitars and a shuffle rhythm. The opening verse sounds like a glib kiss-off; “We stood up and said our vows of always and forever, now all I got is a long divorce and some ugly Christmas sweaters/It don’t matter much to me to matter much to you, I was down but I’m bouncing back, now that we are through.” But that’s some tough talk meant to camouflage a broken heart. Midway through as the fiddle, mandolin and dobro hug the hairpin turns of every mixed emotion, the truth is revealed; “I threw out my vitamins, I got Percocets and Vicodin, and all these other pills they pass the time/One to keep this hand from shaking, one to keep this heart from breaking, one to keep you far away from my worried, worried mind.”

There’s a bit more backbone to “Right To Be Wrong.” Jangly acoustic notes dart around muscular electric riffs, stealthy bass lines angle round a majestic Hammond B3 wash that is corralled by rustic harmonica and an off-kilter beat. The lyrics offer some rueful self-recrimination, but still manage to display a bit of gallows humor; “I know this house looks empty, but believe me it’s full of doubt, I can’t help but wonder sometimes maybe we could have worked it out/The nights they get lonely, in this cheap, inflatable, double-sized bed, Me and the old dog, and some books I still ain’t read.”

On two tracks, “Walk Across Texas” and “Memoirs Of Our Youth,” Rodney is joined by Austin’s own Bonnie Whitmore. While she has sung with everyone whose anyone (Hayes Carll, Jimmie Dale Gilmore and James McMurtry, to name a few), in 2016 she jump-started an auspicious solo career. The former opens with some shivery fiddle, gritty guitars, roiling bass and a Waltz-y, rhythm. Pledging his undying fealty to a woman, he manages to sneak in a little self-deprecation; “I’d swim across the ocean for a woman like you, I’d swim across that ocean blue/But on my own, I’d sink like a stone, I can’t swim a lick, it’s true babe, I’d walk across the bottom for you” Bonnie’s feathery vocals shade his on the chorus.

The latter starts out like a wistful recollection of childhood, propelled by braided acoustic guitars, sparkly mandola, stalwart upright bass and a chugging backbeat. But the family flashbacks paint a stark portrait of a Mama tried, but not for long, faced with a father who spews threatening invective like “I brought you so I can take you out, settle down before I give you something to cry about/You kids think you learned it all in the few years you’ve spent at school, you might think you walk on water now, but remember shit floats too.”

Current events are front and center on three tracks. The lyrics of “Pillage And Plunder” feel ripped from the headlines, as they take aim at the current administration’s perverse need to rape the land in the service of big business. Rodney pulls no punches; “…The ice caps are shrinking, the Polar Bear’s thinking ‘is it me, or just a hotter than hell’?” He addresses the country’s divisive political climate; “Fighting for something, something no one can see/To be on par with the Joneses, throw the first stone at who don’t agree.” All the while, courtly Spanish guitars slide over loose-limbed bass lines and shimmering Hammond notes wrap around a meandering melody that’s played in ¾ time.

Picking up where Merle Travis and Lee Dorsey left off, “Company Town” feels like the logical successor to the former’s “Sixteen Tons” and the latter’s “Working In A Coal Mine.” The melody and instrumentation, which includes acoustic and electric guitars, Hammond B3, Wurlitzer, bass, drums, trumpet and tenor tenor sax hit that sweet spot between good old Country comfort, Big Easy Savoir Faire and Muscle Shoals grit. Mournful and Soulful, the lyrics speak to the backbreaking tradition passed from father to son; working in the coal mine; “We take our pride in all we do, gave our lives to put the lights on for you/So Hollywood, you don’t understand all the troubles of a coal mining man.”

Finally, he pleads the case of the white collar worker on “Middle Managed Blues.” Acoustic and electric guitars connect with upright bass, stinging Resonator riffs and a shuffle rhythm. Something of a shaggy dog story, the lyrics still manage to convey the dread we’ve all felt at some point on the job; “The boss man gave me my review and said here is what I think of you, before I rip you apart, just know I never liked you right from the start.” Naturally, by the end of the song the guy is working part-time construction with a guy named Bob.

Other interesting tracks include the propulsive jangle of “Hard Life” and the aforementioned “Rivers Run Backwards,” which includes this brutally candid couplet; “I’m going to love you forever girl, but I’m staying just for the night.” The album closes with “Don’t Look Back.” Rodney’s rough-hewn vocals are mirrored by smoky harmonica notes, acoustic, electric and slide guitars, slithery bass lines, gossamer keys and a chugging rhythm. Lyrics catalog the highs and lows, blood, sweat and tears, whiskey, smoke and beer, love lost and found and a life well spent. Something of a restless carpe diem, lyrics like “So goodbye tomorrow, if you ever come, if I could start over, I’d do exactly as I done,” offer no apologies.

With his second effort, Rodney has matched rich narratives with indelible melodies. Each song is shot through with humor, grace and tenderness. Life may feel like the Same Shi(r)t Different Day, but he manages to greet it with a knowing grin.