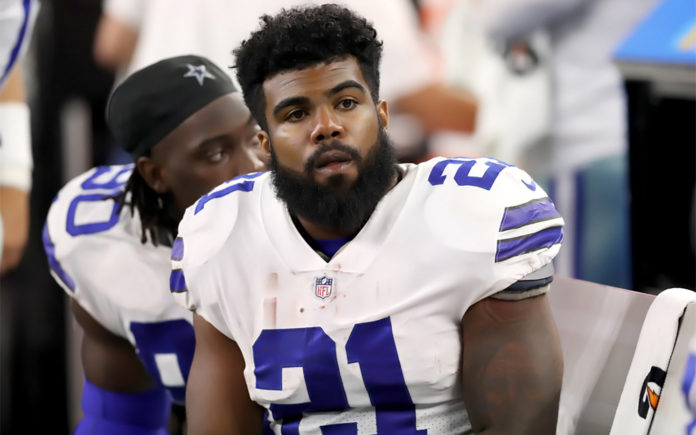 The Commissioner of the NFL has utilized a power afforded to him by the league’s collective bargaining agreement to save himself from the headaches that have already begun.

Roger Goodell has stayed out of the public eye on the matter of Ezekiel Elliott throughout the investigation and suspension process. Now that an appeal is set and the fireworks between the NFLPA and the league’s owners have begun, he is distancing himself from the soap opera even further.

The NFL announced that Elliott’s appeal hearing would be held on Aug. 29 and that Harold Henderson would oversee the proceedings. Not Roger Goodell, you know, that guy making $48 Million a year to handle issues like this for the NFL.

For the owners, this is the next best thing to Goodell presiding over the appeal hearing himself. Henderson has been hired by the NFL to preside over similar matters on several occasions, including the Adrian Peterson suspension. For Goodell, it allows him to navigate away from the situation, which has already gotten tumultuous.

Darin Gantt of NBC Sports reported this past week that NFL executive vice president of communications Joe Lockhart released a statement that accused the NFLPA of spreading misinformation to weaken the NFL’s case to uphold Elliott’s six-game suspension.

Over the past few days we’ve received multiple reports of the NFLPA spreading derogatory information to the media about the victim in Ezekiel Elliott discipline case. It’s a common tactic to attempt to prove the innocence of the accused by discrediting the victim — in this case Ms. Thompson — when coming forward to report such abuse. Common or not, these tactics are shameful. Efforts to shame and blame victims are often what prevent people from coming forward to report violence and/or seek help in the first place.

The NFLPA fired back at the league shortly after Lockhart made the statement, denying the claims and accusing the NFL of being the party guilty of spreading misinformation.

Via Twitter the NFLPA Fired back; “The public statement issued on behalf of every NFL owner is a lie. The NFLPA categorically denies the accusations made in this statement”

As the appeal hearing decision gets closer, it’s likely that the union and the league will continue to use the media to jab at each other like a couple who is fighting talking to each other like everyone else does a child or pet out of spite. This is the drama that Goodell chose to avoid when he recused himself.

For Goodell, there was no real upside to presiding over the hearing. He would have been held responsible for the result, and no matter what that is, some party is likely to be incensed. If Goodell had overturned the suspension completely, public reaction would have destroyed him as two-faced on matters such as domestic violence. If he had reduced the suspension, he might have been seen as knowingly putting the league in position to be the target of litigation by his employers, the league’s owners. If he upheld it, he risked infuriating Jerry Jones, one of the most powerful owners in the NFL.

Goodell’s job security depends not only on keeping his bosses happy but on managing the league’s interests in society. As the face of the league, any criticisms of Goodell malign the NFL as well. That’s why it was the prudent thing for Goodell to distance himself as much as possible from the drama that has just started to unfold.