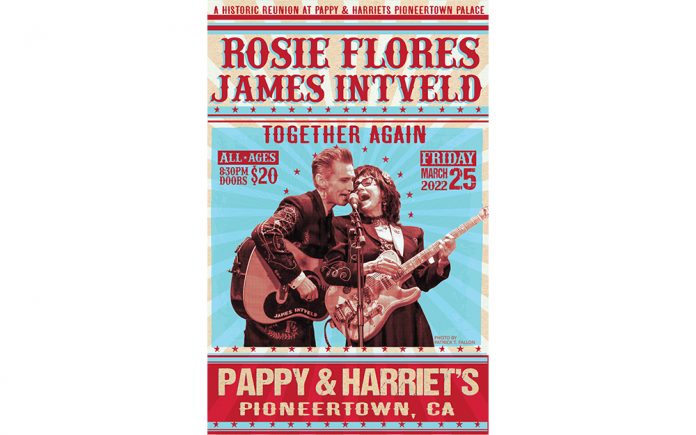 If you aren’t familiar with Rosie Flores and James Intveld, then you have been missing out. The pair will be sharing that stage for the first time in over 35 years when the play Pappy & Harriet’s on March 25th.

Although originally from San Antonio, Texas, Rosie made her bones in L.A. as part of the thriving Punk Rock scene. Initially, she fronted her own band, Rosie And The Screamers, before joining The Screamin’ Sirens, the seminal distaff aggregate that blurred the lines between Rockabilly and Punk. By the late ‘80s she embarked on a solo career. In the ensuing decades she has released a series of critically acclaimed albums that distill her myriad influences into a heady concoction of Rockabilly, Blues, Western Swing, Country, Jazz and Roadhouse Rock & Roll. Rosie is currently signed to Americana indie label Mule Kick. She has been headlining Pappy & Harriet’s since the venerable venue’s earliest days.

James also earned his stripes in L.A., working as an Americana/alt.country musician long before those terms were invented. He spent plenty of time earning his keep at L.A.’s premier Country club, The Palomino, initially fronting his band The Rockin’ Shadows, then as a solo artist. He’s also thumped bass for Dwight Yoakam, played lead guitar for the Blasters and added harmonies for John Fogerty’s touring band. Additionally, he’s carved out a separate acting career, appearing in Roadhouse, dubbing singing vocals for Johnny Depp in Crybaby and portraying legendary Wrecking Crew drummer Hal Blaine in a Beach Boys miniseries. He made his directing debut with the David Carradine film, Miracle At Sage Creek.

It will be a night of Roots Rock Royalty when the pair return to Pappy’s on Friday, March 25th. If you’re smart, you’ll snap up tickets while they’re still available.