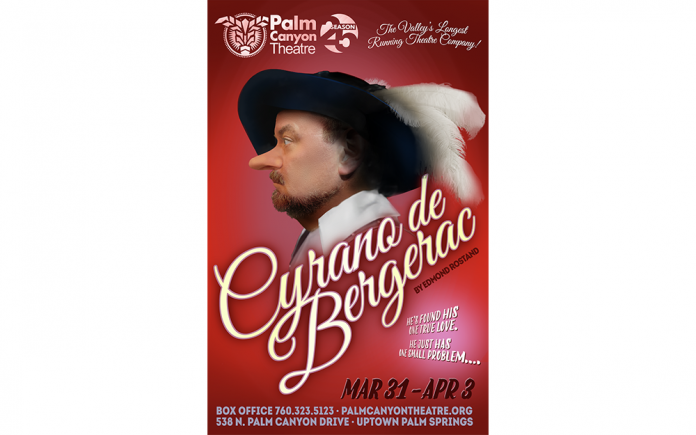 Palm Canyon Theatre (PCT) is presenting the classic story of “unrequited” love.  While the film version is currently playing at the movie theatres, here’s your opportunity to see the live production on stage. Cyrano de Bergerac runs March 31-April 3. For four nights only!

Set in 1640 Paris, Edmond Rostand’s romantic drama Cyrano de Bergerac, tells the story of a gifted poet and swordsman, with self-doubts and insecurities when it comes to his own prowess.  Despite possessing many talents and a brilliant mind, the size of Cyrano’s nose, has him believing that he is not worthy of love and therefore unable to profess his love for the beautiful and intelligent Roxane. Meanwhile, the Baron Christian de Neuvillete, whose handsome face compensates for his lack of wit and intellect, sets out to win the heart of the lady Roxane. Cyrano’s lack of confidence prompts him to instead help Christian court Roxane, by wooing her with his words, as though they were written by Christian, even though they were really written by Cyrano himself.

For tickets, sponsorship opportunities, or other information, call the PCT Box Office at (760) 323-5123 or order online: PalmCanyonTheatre.org. The Palm Canyon Theatre is located at 538 North Palm Canyon Drive, at the corner of Alejo Road and Palm Canyon Drive. Box Office hours are currently Tuesday-Saturday, 10 a.m.-4 p.m.