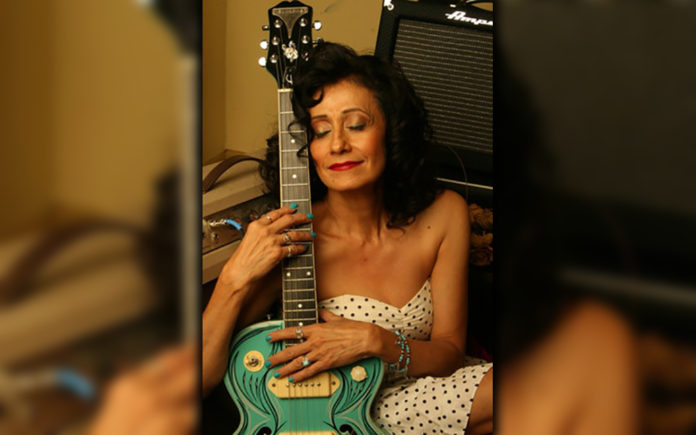 If you closed your eyes when talking to Rosie Flores, you would likely assume you were talking to a hopeful 20 something-year-old about her musical dreams and ambitions, that is if it weren’t for the realization you are talking to a woman with decades in the business, who has been voted “Top 75 Greatest Female Guitarists of All Time,” by Venuszine, and is the recipient of “Best Female Honkytonk Artist” and “Best Female Rockabilly Artist” in the fan voted Ameripolitan Awards, not to mention a “Peabody Award.” Austin, Texas has even declared August 31st “Rosie Flores Day.” In an industry that has hardened the most acquiescent of souls, Flores seems unaffected, either by what some might call limited commercial success or by the enviable awards she has been the recipient of. There are no pretenses, no politically correct well-rehearsed answers. There is only the authentic love for the music dripping from an earnest and grateful heart excitedly wondering what the next musical adventure will hold. Open your eyes and you will start to believe that there is something in the Rockabilly water that has preserved this beautiful lady both inside and out.

After some notable success in her earlier years with bands Screaming Sirens and Rosie and her Screamers, it was Flores’ 1987 self-titled solo debut with the single, “Crying Over You,” that put her on the Billboard charts for the first time. Since then, Flores has recorded ten additional solo albums and is on the precipice of releasing another, one that she considers “a gift” from the love and support surrounding her these days.

Throughout her pilgrimage, one could say that Rosie Flores has done as much for the great women in music that preceded her, as she has done for herself. Her 1995 release of Rockabilly Filly received major attention, and reintroduced Rockabilly pioneers Wanda Jackson and Janis Martin to audiences worldwide through their duets with Rosie. The release was followed up with a successful 1995 tour with Jackson. In 2007, Flores brought Janis Martin to a recording studio in Blanco, Texas, to record what would be both Martin’s first solo album in thirty years as well as her last before succumbing to cancer. After the project was turned down by a number of record labels, Flores raised more than $16,000 on Kickstarter to release the album, which was titled Janis Martin: The Blanco Sessions.

Currently, Flores has a new album of her own that is being mastered in Los Angeles and is set to release near the end of this year. “This new album feels like a gift to me from the people around me who have shown me so much support,” shared Flores. “People have told me that they want to support me because I’ve influenced so many women to play guitar; people whose names I can’t mention who felt this really needed to happen – they’ve all contributed. We live in a society now where there are no record deals. You can’t ask your record company for 25k to produce a record. You have to find creative people around you to help make things happen. There a lot of good songs on it, and I’m very excited about it. I don’t think I’ve ever sang like I did on this album; it’s a different voice. Kenny Vaughan (long-time member of Marty Stuart’s supporting band, The Fabulous Superlatives) and I trade guitar solos. Charlie Sexton (guitarist for Bob Dylan’s backing band) came in and produced all the over dubs. There are eleven tracks on it that I am really proud of.”

Thursday, July 6th, Flores will be bringing her Rhythm Rockers (Greg Boaz on bass, Skip Edwards, who recorded with Dwight Yoakum, on keys, and Steve Mugalian on drums). She’ll be playing songs from her most recent album, Working Girls Guitar, an album she feels is “one of the best records I’ve ever recorded.” The record was a first for Flores as she is not only the producer, but is the only guitar player, which garnered feature stories in Guitar World, Premiere Guitar and Guitar Player.

Get your tickets for Thursday’s show while you can at www.pappyandharriets.com Space is limited and the show is expected to sell out. Tickets are general admission, first come, first serve. Tables are reserved for diners with reservation for second seating (after 7pm only).

Stay tuned, as I will be following up with Rosie on behalf of CV Weekly to announce the new record release along with some deeply honest conversations about being a woman in the music industry over the years.