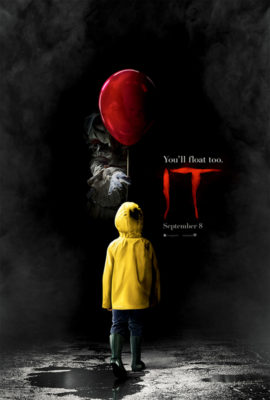 If you have an irrational fear of clowns, you are suffering from coulrophobia.  It’s no laughing matter and for some, it can be psychologically and emotionally crippling.

The only cure is to find a safe way to face your fears.

As a professional movie reviewer, I am licensed to prescribe that long time sufferers of this rarified disease see Andy Muschietti’s masterly crafted and diabolically frightening big-screen adaptation of Stephen King’s now iconic coming-of-age horror story delivers all the necessary visceral thrills along with welcome doses of intermittent humor and emotional power.

King’s popular 1986 novel has been terrifying readers for decades, in some American youth subcultures, reading it has almost become a required adolescent ritual.  Although King’s novel is set in the 1950s, the new movie update is set in the summer of 1989 (eerily matching the approximate time of the previous TV version).

The environs of small town Derry, Maine remain the world of the story where a heroic preteen gang, or club, self-named “Losers,” band together in order to confront an evil entity known as Pennywise the Dancing Clown (Bill Skarsgård) whose history of murder, mayhem and malevolence apparently dates back centuries — if not longer.  We follow the brave, bullied, kids as they risk their lives and sacrifice their innocence in an effort to survive the lurking, deadly terror.

I loved the lush production values and detailed set design that makes palpable a place where menace lurks in the shadows of just about everything.

The ensemble of kids — both characters and actors — is spot on, and reminds of the same in “ET,” “THE GOONIES” and “STAND BY ME” (also from a story by King).  Muschietti’s movie does not include the most controversial scene (involving teen sex) of King’s book, but the larger emotional truth that part of growing up is learning to face one’s fears remains.

The film covers only the first part of the book.  A sequel, set in the present day with the kids as adults, is schedule for later.  Don’t you hate it when they do that?

Random “IT” factoid:  The TV version was broadcast 27 years ago.  So it’s only fitting that this new big screen version comes out now, matching the 27-year cycle of Pennywise!  Feel the fear?  Pennywise feeds on it.  Recommended 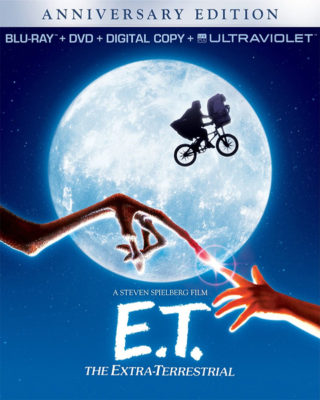 In 1982, Stephen Spielberg created iconic movie magic with this fable about the emotional adventure of an adorable alien lost on earth and thee lonely boy who befriends him.

Winner of four Academy Awards©, the film has become a cinematic touchstone for generations of movie goers and one of the most loved films of all time.

Universal Pictures is celebrating the film’s original theatrical release with the release of “a special gift set” that includes a 4K Ultra HD disc with over three hours bonus features (deleted scenes, Spielberg interview and much more) plus a Blu-ray disc, plus a re-mastered CD soundtrack of the original Grammy winning album.  There’s also a collector’s booklet with rare behind-the-scene images and stories.

When it was initially released, all kinds of stories circulated about this movie that was an immediate hit.  There were sermons that claimed the success of the movie was that the central character was essentially a Christ figure who came from the heavens, has healing powers, lives, dies and is “resurrected” then returns to the havens with the promise “I’ll always be with you.”

There were other theories circulating, among them:  E.T. (the movie) was government propaganda to make the world more receptive to alien visitations.  And further, that Spielberg was part of the brain washing conspiracy, more proof of which is his “CLOSE ENCOUNTERS” movie!  Universal Pictures Home Entertainment.  Blu-ray.