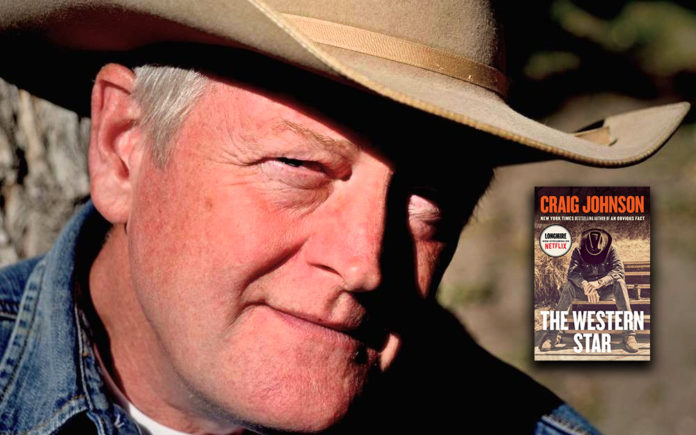 Tall, handsome and roguishly charming, Sheriff Walt Longmire has captured the hearts of both men and women in books and on television.  But, it wasn’t the sheriff who spoke in Rancho Mirage last week, it was his creator, author Craig Johnson.  And, even as adored as Longmire is, Johnson stole the show with his authentic, cowboy charisma and beguiling sense of humor.

The free program was held at the Rancho Mirage Library and presented by Rancho Mirage Writers Festival Foundation as part of an extended series of encounters with notable authors.  The RMWF is held in mid-January, and is a high-end event that lasts over several days celebrating renowned authors, broad ideas and the joy of reading.  The popular Festival has already sold out 2018.

Johnson is the bestselling author of the Walt Longmire mystery series, which now comprise 13 books.  He has written and published another six books that include mysteries, short stories and e-books.  His latest Longmire novel The Western Star (Viking, 304 pages) was released the day before Johnson spoke, participated in a Q&A, and signed books in Rancho Mirage

The Longmire series follows a Wyoming sheriff who investigates mysteries and murders in the remote landscape and small communities of the fictional Absaroka County.  Longmire has beloved supporting characters that include his deputies, a daughter, and best friend, Henry Standing Bear – an “Indian.”

During Johnson’s talk, he noted that his “Native Americans” friends in Wyoming prefer to be called “Indians” since anyone born in the Americas is “native” American.  He added that the Indians he knows are more humorous, than stoic.  Johnson also admitted that many of his fictional characters come from the real people around him and Johnson does not change their names.

Johnson regaled the audience with entertaining personal stories that generated robust laughter.  He and his wife — also in attendance — live in Ucross, Wyoming, population 25.

Comfortable on stage with a wireless microphone, Johnson moved about connecting with those in attendance like a comedian.  His apparel: cowboy hat, boots, jeans and snap button western shirt was by no means a costume, but evidence of the real guy.

A decade before the Longmire character came into existence, Johnson had interviewed a local Wyoming sheriff.  Johnson had a curiosity about “Sheriffing” and the role they play, as it is the only elected law enforcement agency in the country.

Johnson wrote two chapters and put them in his desk where they sat for ten years while he fixed up his ranch.  When the same Sheriff stopped by one day and asked Johnson what happened to the story he was writing, Johnson took another look and started writing.

With each book, Johnson follows an over-arching structure that has been worked out for the entire Longmire series.  Yet, he allows his characters to evolve naturally around the issues that present themselves without force.

His new book, The Western Star, features a train.  Johnson shared his fascination for trains and an experience he had as a kid where he hopped a train and ended up 300 miles from home.  “Trains are going somewhere I’ve never been,” said Johnson.

The story flashes back to Longmire’s past where fans will get a glimpse of how he was shaped into the Sheriff he is today.

In 2012, the cable television channel A&E premiered the multi-episodic “Longmire” series based on Johnson’s bestselling books.  The show debuted at number one.   When A&E cancelled the show, Netflix continued with the “Longmire” series and is currently finishing it’s sixth and final season.  All episodes are now on the popular subscription-based streaming-media outlet.

Even with the success of the television series, Johnson remains a committed author who still enjoys storytelling.

“As much as I love talking about Hollywood and the TV show, I want to celebrate the fact that we happen to be sitting in a library,” said Johnson.  “The one thing TV can’t compete with is a good book.  I’ve got one incredible secret weapon that I utilize in what I do every day: It’s called imagination.  It’s where I go.  I’m a wordsmith.  It’s my job to line up the words like dominos, not too many, not too few, and your imagination does the rest.  And I thank you for that.”