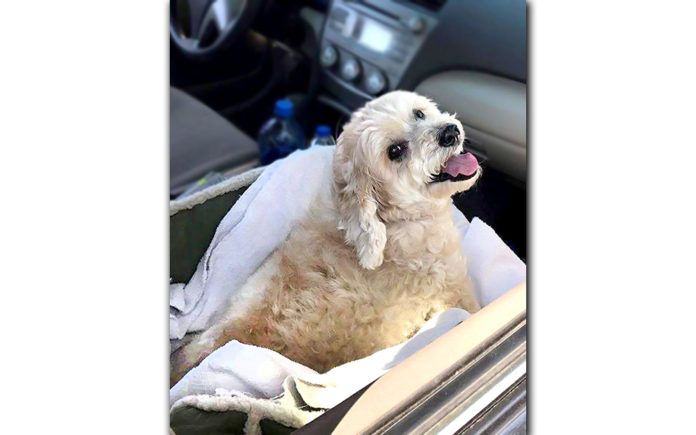 A microchip with two disconnected phone numbers was the only clue to the identity of a stray matted dog running the streets of Palm Desert. A group of animal advocates connected through Facebook, and worked together to create an incredible reunion.  Sammy’s journey home was a miracle, separated by 10 years and 2,000 miles.

A good Samaritan rescued the exhausted pup from a busy street and contacted Loving All Animals for assistance.  “Found Dog” flyers were posted at the county shelter.  The dog was posted on Facebook in an attempt to locate an owner, tagging local animal advocates to expand the search. Scanning for a microchip revealed an owner named Patricia Carpenter, but both phone numbers were disconnected.  Tracy Habijanac at Loving All Animals arranged for a foster home to care for the friendly pup.

Coachella Valley animal advocates, Heather and Sean Ryan, shared the pup’s cute face on their Facebook page.  Their Facebook post was seen by their cousin in Dallas, Texas, Jessy Faiferlick, another animal lover who volunteers at animal shelters.  Jessy’s interest was piqued by the dog’s plight, and she asked to get the name and disconnected phone numbers associated with the microchip.

It turns out that Jessy is an investigator in the banking industry with access to numerous websites to locate missing people.  She went to work zealously searching for the missing Patricia Carpenter and learned she was deceased.  Next, Jessy searched for anyone related to Patricia Carpenter.  She discovered an Ashley Carpenter Fritz, a resident of Louisiana.  Locating Ashley on Facebook, Jessy relayed a message about the found dog.  Within ten minutes there was answer, and the dog’s mystery solved.  Ashley responded, “Oh my gosh!  That’s Sammy, my late mother’s dog!”

Ashley had only distant memories of the dog once owned by her late mother, meeting the pup during brief visits to California.  By 2006, Ashley was married and starting to raise a family in Louisiana. That year, Ashley went online in to help her mom find a rescue dog in the Coachella Valley, and found an adorable pup in a shelter.  Her Mom loved the new dog she named Sammy.  Sadly, Patricia Carpenter was ill and passed away a year later at the young age of 49.  Ashley later learned Sammy was given away to a friend.

Ashley states, “I could not believe it when I got a message from someone who I did not know asking if I was related to Patricia Carpenter because they found her dog.  They posted the dog’s picture all over, but no one filed a lost dog claim for him. I knew I wanted him home with us, but had no idea how we would make that happen from California. A group of complete strangers worked with us to get Sammy back.  I am forever grateful to them for bringing a part of my mom back to our family. This April, it will be 10 years since my Mom has been gone, and we will mark the day with the dog she loved.” 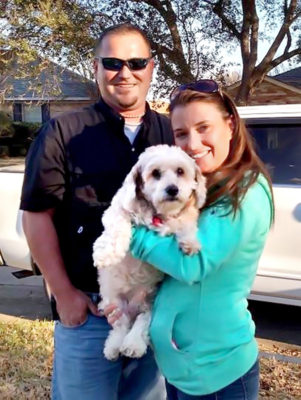 Ashley is a busy mom responsible for home schooling her four young children.  Sean Ryan had a few days off work, and offered to drive Sammy to Dallas, a midway point at Jessy’s house.  Ashley gratefully funded his expenses for the 3 day journey.

Sammy was a happy little passenger who seemed to anticipate something exciting was happening for him.  A humorous moment occurred when Sean could not find a pet friendly hotel in Texas.  He bundled the pup up in towels and prayed he would not bark as they crept past the front desk clerk and the “No Dogs Allowed” sign.  Thankfully, Sammy remained silent again when Sean had to return downstairs again to get the right room key.

It was an exciting moment when Ashley and her husband, Chad Fritz, arrived in Dallas and scooped up the “prodigal pup” in their arms.  Today Sammy lives happily in their home on 2 fenced in acres, full of children and other animals.  He gently chases the chickens, and plays happily with the family’s 3 other dogs.  He adores the children, and rotates sharing beds with them.  Ashley reports Sammy, now 12 years old, is almost deaf.  But his energy and happy spirit are boundless, and he brings a new joy to a young family who report it seems like he’s always been a part of their lives.

Tracy states, “It was a pleasure to see our efforts pay off, and help this family get part of their mother back.  Having a forensic investigator get involved in the case was truly remarkable.  This miracle reunion happened because animal advocates worked together, determined to create a happy ending for a dog and his family.”  Welcome home Sammy!