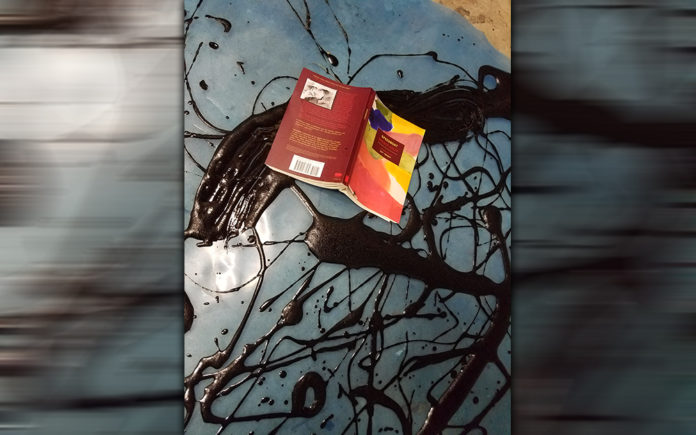 There are book clubs and then there are book clubs. In the second in an on-going series Durden and Ray brings Book Club: Speedboat. Written by Renata Adler, published in 1976, Speedboat was a departure from what was acceptable fiction structure. The book centers on the world of Jen Fein. Told in a first person, in a disjointed mosaic, the world of Jen rushes from place to place and thought to thought.

With that as its base Steven Wolkoff curated an exhibition that brings together a diverse group of artists. One of those Artists is Painter Jenny Hager.

Jenny’s work centers on an “investigation of an ambiguous, constructed, and animated space that utilizes open, abstracted imagery in order to bypass or delay immediate recognition and access a state of suspended wonder.” When viewed the work has spatial impact that is both familiar and jarring. But the eye is continually drawn in the center of the work, center being relative. This exhibition features her work Girls, Horses and Camp.

“We had several conversations about the Speedboat. I believe Steven was searching for a less well known, but influential book. He felt that allowed for unfamiliarity and a move away from preconceived notions on the artists’ part,” said Jenny.

“As for myself, I was initially drawn to Adler’s sharp and witty prose. Her ability to comment on larger cultural assumptions and norms through relating episodic experiences in various different settings is intriguing.   Given the non-linear and steam of consciousness narrative employed by Adler, I read, waiting for a particular passage to resonate either personally or through clever use of language, in creating a tableau. The personal won out, in the form of Adler’s musing on adolescents, camp, prep school, drugs, and horseback riding. I have experiences with horses, camps, and that strange adolescent infatuation. While reading Speedboat, weirdly, two friends lost their horses in stall accidents. I was working on a painting that was giving me difficulties, and superimposed quite literal images of girls falling off of horses and horse skulls. The result was very disappointing but it laid the foundation to explore Adler’s intense depiction of the paganism of camp and prep school, budding sexuality, experimentation, death, and the draw of horses.”

In 1976 the book was radical. The country was in the throes of Bicentennial Fever, the lingering effects of Viet Nam, Title IX, gas rationing and cultural changes.  But times change and so does art. While the exhibition uses the book as a starting point, it doesn’t mean that everyone was captivated by it. Such was the experience of David Bondi.

“I read the book for about an hour and it just didn’t keep me engaged. The plot structure is unconventional, which I can normally deal with, but I felt like some of the writing was trying to be too clever in a way that was reminiscent of my hipster experiences in the 90’s. Very dinner party dilettante,” noted David. “I am 50 now and just kind of old and over it. I’ve been really fortunate in my life to have befriended some truly brilliant people who are humble and kind. It’s just not what entertains me these days.”

But David found appreciation of the book, different from the others and perhaps as radical as the 1976 publication. “I thought after giving the book a fair chance, I could put it away and get on with the art making. So considering that I didn’t really like it, I decided to tear the whole thing up and build a sculpture around the pages utilizing some spontaneous processes and throwing in some of my signature character designs. The whole thing ended up being a metaphorical genre mash-up, kind of like the book itself. Pop art meeting abstract expressionism on a conceptual foundation.”

Just as a book club invites discussion, so does the art influenced by the words.