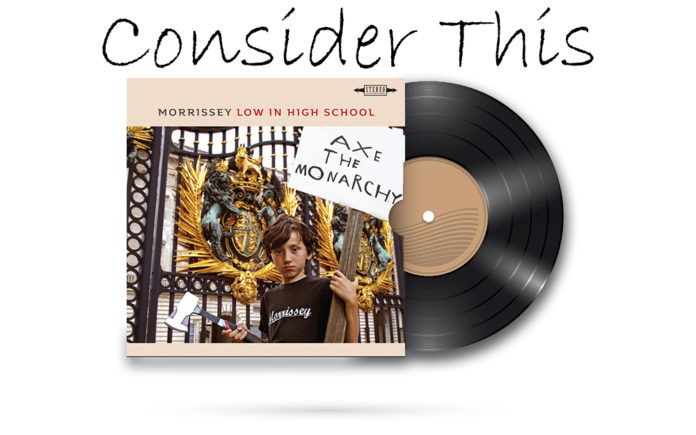 “Earth is just one big asylum, an explosive Prison cell/See us squirm in our own damaged spell.” Yep, Morrissey is back, and as usual, he’s happy, peppy and bursting with love.

People either love or loathe Morrissey, he has evoked passionate opinions ever since he appeared on the music scene in the early ‘80s as lead singer for the Smiths. That Manchester four-piece, along with R.E.M. and U2 formed a holy triumvirate of Post Punk/New Wave.

Steven Patrick Morrissey was born in Lancashire, England in 1959. His Irish Catholic family relocated to Manchester and Morrissey came of age in that rainy city. He asserted his individualism pretty quickly, obsessing over Pop stars like Marianne Faithfull and Sandie Shaw. During his teen years he became a keen aficionado of James Dean, Oscar Wilde and British “Kitchen Sink Dramas.” He displayed a quicksilver wit, and managed to be simultaneously bookish and athletic.

Glam Rock exploded in Great Britain just as he hit puberty, and he became a passionate fan of the New York Dolls. Punk Rock originated in America in the mid ‘70s, but British bands like the Clash, Sex Pistols and the Damned co-opted and redefined the movement. Morrissey was a quick convert, by 1977, he was fronting the Nosebleeds (which included Billy Duffy, who later found fame as guitarist for the Cult). Somehow, he also found time to write books about the New York Dolls, James Dean and obscure B-Movie actors.

Morrissey connected with protean guitarist Johnny Marr in 1982 and the pair began writing songs together. Enlisting Drummer Mike Joyce and bassist Andy Roarke, they became The Smiths. The band signed with Rough Trade and in 1984 they released their eponymous debut that same year and it climbed to #2 on the British charts.

The Smiths’ sound was nothing short of thrilling. Blithe and playful melodies were accented by John Marr’s sweet, but never cloying guitar riffs. In lock-step with Mike and Andy, the arrangements and instrumentation bookended Morrissey’s Byronic flights of fancy. Lyrically, he pushed the envelope, detailing same-sex attraction, and exploring themes of loneliness and alienation.

His mordant, often black sense of humor, undercut the inherent melancholy of his words. A self-proclaimed “celibate homosexual,” he finished the job David Bowie started in the ‘70s, cleverly pushing sexuality out of the Rock N’ Roll closet. His vocals ricocheted from croon-y to keening to yodeling, often during the same song.

The Smiths were massively popular in Great Britain, and, despite minimal radio airplay and limited exposure on MTV, cultivated a passionate fan-base in the United States. Morrissey was worshipped as a Post-Punk provocateur, his persona, much like David Bowie’s spoke to anyone who felt marginalized, maligned, vulnerable and different.

Throughout their five year run the Smiths were on fire, releasing four studio albums, myriad singles, a couple of compilations and a live record. Each release received critical acclaim and increased their popularity. But in 1987, they called it quits at the height of their success. Almost immediately, Morrissey launched a solo career. Less than a year after the Smiths’ demise, his debut, Viva Hate, appeared. It shot to # 1 on the U.K. charts, buoyed by hit singles like “Suedehead” and “Everyday Is Like Sunday.”

Bona Drag arrived in late 1990, more of an odds and sods collection than a full-fledged album. Conversely, Kill Uncle, released in 1991, felt weirdly over-cooked. He really found his footing on 1992’s Your Arsenal. Produced by ex-David Bowie guitarist Mick Ronson, it utilized the talents of guitarist Boz Boorer (formerly from the Polecats). The melodies were shaded with a patina of Glam and Rockabilly.

The remainder of his ‘90s input felt erratic. Vauxhall And I from 1994, wed morbid sentiments to torpid melodies. A year later, Southpaw Grammer took a sudden left turn into Prog-Rock territory. Meanwhile, Maladjusted, released in 1997 split the difference between truculence and tragedy.

In the early ‘90s, Morrissey had relocated from London to Los Angeles, and he took a hiatus from recording music between 1997 and 2004. The break seemed beneficial, as he roared back with his most confident effort to date, You Are The Quarry. He followed that resounding success two years later with the lackluster Ringleader Of The Tormentors. But he rectified that mis-step with the Punkiest Album of his career, 2009’s Years Of Refusal.

Five years elapsed between Years… and the politically charged World Peace Is None Of Your Business. Released in late 2014, that record veered between activism and apathy. A number of the songs were brittle and catchy, but at this point his casual misanthropy felt like a worn-out construct. Despite mixed reviews, it sold well, hitting #2 in the U.K. and #14 in the U.S.

Now following three years, (a pretty quick turnaround for him), Morrissey has returned with his 11th studio album, Low In High School.” The listener is greeted with trumpeting Elephant sounds that segues into pummeling drums and a crashing fanfare on the opening track, “My Love, I’d Do Anything For You.” The arrangement quickly downshifts locking into a thudding groove accented by sinewy, slingshot guitar. The melody drifts between dirge and anthem, vaguely resembling a constipated James Bond theme.

Morrissey’s sing-song vocals simply drip with condescension as he takes easy swipes at the fourth estate, instructing the listener to “Teach your kids to recognize and despise all the propaganda filtered down by the dead echelons mainstream media.” Swirly synths, scattershot guitar riffs and flatulent horns add to the circus-y chaos, winding down with an extended instrumental coda.

Morrissey has always been outspoken. A life-long vegetarian, cat lover and animal rights activist, he supported the slightly controversial P.E.T.A. organization. Although he has never officially come “out” he has championed Gay rights and advocated pansexuality for decades. His criticism of American Presidents and the British Monarchy has been unflinching. But lately his views have tilted toward isolationism and fierce Nationalism that have bordered on racist. Three tracks here wade into charged political waters and the results are mixed.

“I Wish You Lonely” fuses punishing synths to a thumpy beat. Initially, he bequeaths his dour lifestyle on his listeners; “I wish you lonely if only for one day, so that you might see routine for me since the day I was born.” Pretty quickly the lyrics devolve into a sloganeering rant over a rat-a-tat rhythm; “Monarchy! Oligarch! Head of state! Potentate!” (Essentially Queen Elizabeth, Vladimir Putin, Theresa May and Donald Trump), Adding insult to injury, the song is all verse and no chorus.

“I Bury The Living” opens with a minute of cricket noise and smoky harmonica before menacing guitar crashes over thudding drums The lyrics attempt to have it both ways, offering a first person account of a soldier serving in the Middle East. But then the script is flipped and suddenly, he’s mocking enlisted men as “honor-mad cannon fodder.” As the melody builds to a bleak crescendo, Morrissey doubles down, putting these words in his fictional soldier’s mouth; “I am answerable only to Jesus, and with the grace of God I will die in my own bed/If you wonder what’s in my head, it’s just hatred for all human life.” This patronizing assessment from a wealthy Pop star, feels tone deaf, at best.

Finally, “Who Will Protect Us from The Police” opens with a blasting siren wail, dystopian synths and slithery guitar. The overly busy arrangement and instrumentation can’t camouflage half-ass lyrics that lambaste police brutality throughout the song, but conclude with the fist-pumping chant, “Venezuela.” Why venerate a South American republic famous for violating human rights.

On three songs, no matter what the stated topic, things take a wildly priapic turn. “Home Is a Question Mark,” features prickly guitar riffs over a nutty back-beat. Ostensibly, the lyrics take aim at the craven record industry, but that theme peters out and suddenly Morrissey is waxing rhapsodic about being “brave, deep in every shaven cave,” daydreaming about French actor, Guillaume Canet, and instructing someone, (hopefully not his cat), to “wrap your legs around my face just to greet me.” Eeesh.

At first glance, “In Your Lap” pays homage to the Arab Spring revolution that gripped the Middle East beginning in 2010. Splitting the difference between an Elton-y piano ballad and a Sinatra-esque croon, Morrissey manages to cock it up, using political insurgency as a chance to get his rocks off; “The Arab Spring called to us all, the people win when the dictators fall/I heard a bang and an almighty crack, and I just want my face in your lap.”

Morrissey’s facility for sly sophistication, cutting quips and cunning wordplay has always been part of his appeal. But that acuity vanishes on “When You Open Your Legs.” The instrumental overture is anchored by stuttery synth horns and snake charmer guitar. Meanwhile, the melody lands somewhere between an arch, Argentine Tango and an “Austin Powers” score. But none of this frippery can camouflage clunky admissions like “Everything I know deserts me when you open your legs.” Oye! Esteban, save that suave verbiage for your Grindr communiques.

Not all the songs here are bad. Three tracks, “Spent The Day In Bed,” “The Girl From Tel-Aviv Who Wouldn’t Kneel” and “All The Young People Must Fall In Love” crackle with authority. “Spent…” is the album’s first single and it’s a genuine kick. The melody is powered by ticklish harpsichord runs, (that wouldn’t seem out of place on a Partridge Family track), rubbery bass lines, squiggly synths and frisky vocals. Here, Moz is playful in all the right ways, even as he alludes to emasculation and castration.

The cosmopolitan lilt of “The Girl In Tel Aviv…” is an intercontinental mash-up of French Musette, Tango Nuevo and Gypsy Jazz. Rippling piano notes connect with strummy acoustic riffs, a castanet rhythm and hints of qanun. The charming melody and arrangement make it easy to overlook yet another diatribe on dire geopolitics.

Of course, Morrissey has a devoted fan base, and this album hit #5 on the U.K. charts and #20 here in the U.S. Unfortunately, Low In High School has little to recommend it. Bloated and bellicose, Morrissey comes off as didactic and pedantic, essentially just icky. His youthful, tongue-in-cheek arrogance has been supplanted by a cranky jingoism. To quote the once great front man for the Smiths, that joke isn’t funny anymore.