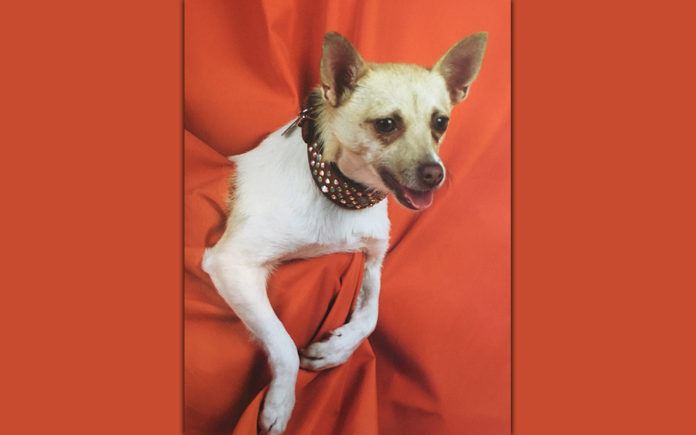 I had no plans to adopt a dog that day in 2007 when I accompanied my friend Larry Birkett to the Coachella Valley Animal Campus, our local Riverside county shelter.  Larry wanted to add another dog to his family.   He asked to meet several small pups, and a small tan and white dog entered the visiting area.  She jumped up and down, springing as though on a trampoline, ignoring Larry and repeatedly landing on my lap.  I weakly protested, “I’m not here to adopt a dog, but I think she is adopting me.”  The enthusiastic pup sealed the deal.

Upon completing the shelter’s adoption paperwork, I learned that my new dog was a hoarding victim, one of a large group of animals rescued during a raid on a home in Hemet.  Earlier that month, I was horrified when watching the local television news to see animal control officers removing 134 dogs and 35 cats from a site ironically operating as Best Buddies Rescue.  Conditions at this so-called rescue were horrendous.

The shelter listed her as a “Chihuahua mix” however the pup resembled a Toy Fox Terrier.   She was a happy pup, constantly in joyful motion.  She was my triumphant little survivor after being in a “house of horrors” but she always feared not getting enough food.   I wanted to name my new dog after a famous survivor, and the character from Gone With the Wind came to mind.  Scarlet O’Hara became my best friend, my buddy on countless adventures.

We shared some wonderful, magical times during our 11 years together.  Scarlet became a popular fixture at the Civic Center and University Dog Parks in Palm Desert.  She ran in large circles, a parade of other pups running behind, rarely able to catch up.

Scarlet found her canine “love” match when my friend Carol Adkison adopted a small dapple male Chihuahua.  I was pleased when Carol responded favorably to my name suggestion of “Rhett” after the hero in Gone With the Wind.  It was love at first sight, and Scarlet and Rhett engaged in endless frolicking, tag, and other assorted games during their visits.

However, her loyalty to me was unmatched.  Friends reported she would sit staring at the living room front door, waiting faithfully for my return home after work.  When I arrived, Scarlet would jump up and down as though there were springs inside her little feet. 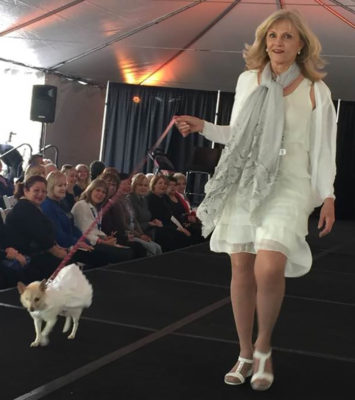 Socially conscious, Scarlet attended a protest on behalf of the animals at the Palm Springs rodeo.  Advocating for animals in need, she attended the International Homeless Pets Day.  She protested at the county shelter when they tried to lay off the rescue coordinator.  Scarlet welcomed every foster pup we took in, greeting them with a wagging tail and a loving heart.

In 2016, her left eye had to be removed when a detached retina resulted in blindness and infection.  Scarlet carried on like a little trooper with just one eye.  She strutted her stuff down the runway when we modeled in matching white dresses for Venus de Fido at the 2017 Women’s Show.

On her final weekend on this earth, Scarlet went RV camping with us at the Colorado River, enjoying the camaraderie of the other dogs and humans.  She had no signs of any ailment.  On October 28th, 2017, Scarlet passed away in her sleep.  Mystified as to the cause, her vet performed a necropsy.  It revealed a sudden embolism to the heart ended Scarlet’s life with little warning.

Today, my “angel in fur” is an angel in heaven.  Dogs, with their pure hearts and loving spirits, are God’s gift to teach us humans about unconditional love.  Scarlet taught me about triumph over adversity, as she survived the worst of conditions to become the happiest of dogs.  The other dogs bring me comfort, but I will never forget my little girl.  Dear little Scarlet, you left such big footprints in my heart.