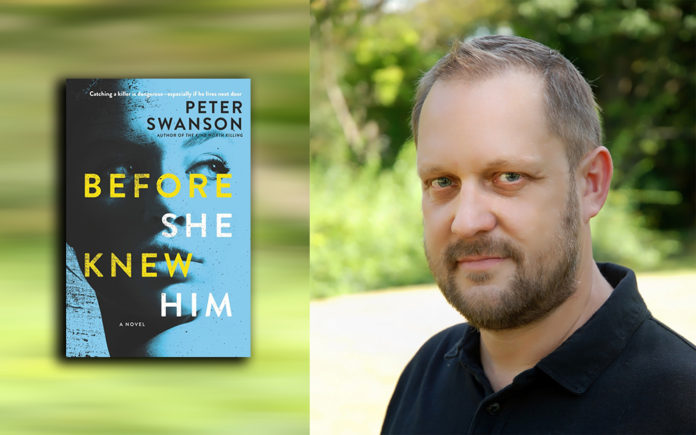 —–
Before She Knew Him
by Peter Swanson – Fiction
—–

We may be able to choose our neighborhood, but not our neighbors.  In Peter Swanson’s Before She Knew Him (William Morrow, 310 pages), one woman gets personally acquainted with a killer.

Hen, short for Henrietta, and her husband Lloyd, have moved to a quiet Boston suburb. It is their first home.  It’s close to the train station so Lloyd can easily commute and only a short walk to Hen’s art studio. The couple seems to have a perfect life and a great future.

The next-door neighbors, Matthew and Mira, invite Hen and Lloyd over for dinner. They reluctantly attend.  Before the evening is over, Mira gives Hen and Lloyd a tour of her and Matthew’s house, where Hen immediately recognizes a trophy in Matthew’s study that belonged to someone else – a young man who was murdered three years earlier.

Hen asks Matthew if the trophy belongs to him, and he says he picked it up at a garage sale.  Hen immediately suspects Matthew is lying and Matthew realizes that Hen knows something specific about the trophy’s original owner.

The next day, to confirm her suspicion, Hen talks Mira into another house tour but Matthew has gotten rid of the trophy.  This begins a dangerous cat and mouse game that quickly escalates.

While following Matthew, Hen witnesses him kill again! However, when she tells the police, they discredit her for a previous criminal record and her problem with mental illness.

Matthew, aware of Hen’s past and her mental health issues, confronts and confesses to her knowing full well there is nothing she can do.  They form a strange friendship that becomes deadly.

Before She Knew Him wastes no time confirming Hen’s suspicions and disclosing Matthew as a killer.  Author Swanson swiftly engages the reader as the story twists and turns to reveal the backgrounds of the main characters’ dysfunction and psychopathology.

I liked Hen as she mindfully navigated her credibility with the police and managed her mental health.  It is no easy task, especially when even her husband disbelieves her.  Hen is on her meds and knows she is stable.  The only person who believes her and knows she is telling the truth is the killer himself.  This is fascinating, fresh and dynamic storytelling.

There are strong moral messages that come from the characters in the story.  Matthew only kills men who have harmed women and gotten away with it.  He defends his killing as seeking vengeance or exacting justice.  From his perspective, he respects and honors women, while his brother Richard objectifies and humiliates women using them only for his perverted pleasure.  Two brothers raised by the same parents.  This juxtaposition is disturbing.

Swanson does a good job informing the reader of what shaped Matthew and his brother without the reader having to spend too much time inside their twisted minds.  Only Richard’s character is written in the first person, which is a clever ploy by Swanson that pays off in the thrilling climax.

Hen is a hero.  With the stigma around mental health, she bravely pushes on with her life, trusts and believes in herself.  Ironically, she discovers her own truth with the help of an insane serial killer.