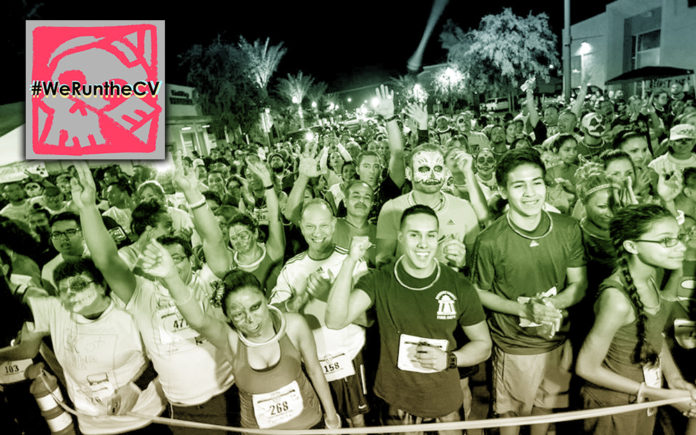 Segment locations and Captain Assignments for the Thursday, September 21st #WeRuntheCV valley wide relay were announced today. There will be 11 segments covering over 60 miles through all 9 Coachella Valley Cities.

The Por Vida 6 week training program designed to help get you to your goal at the November 4, 2017 5th Annual Run with Los Muertos Block Party & 5k will kick off on Thursday, September 21. #WeRuntheCV is in support of and awareness for the Por Vida program, and more broadly to promote running and fitness.

*Local runner Marc Payan has committed to running the entire route himself. Yes you read that correctly. The entire 100km. Payan, a researcher, endurance athlete, and local lululemon Ambassador is the founder of Payan X, an urban fitness and leadership movement in Southern California Cities.

City Representatives will be on hand to commemorate the exchange at each City’s stop. Run with Los Muertos, a day of the dead themed health and culture event that annually draws hundreds of runners and thousands of visitors to Old Town Coachella. Who will you run for?

Run with Los Muertos is a proud member of CV Days of Los Muertos. For more information please visit www.RUNWITHLOSMUERTOS.com or https://www.facebook.com/runwithlosmuertos/