When you hear words like, “We are stoked about the show. We’ve been cramming and jamming hard to get this pilot in the air!” and, “We are all super excited to play our first show!” You think to yourself, “How can I miss this?” The event scheduled for Saturday, May 13, 2017 at the Date Shed in Indio is a quadruple attack of rock with ScottsThotProcess (A Tribute to Stone Temple Pilots), Alice Un Chained (The Most Authentic Alice In Chains Tribute), Aphrodisiac Jacket (A Salute to the Music of The Cult) and the diabolical desert demons, Mighty Jack. Doors open at 8 p.m. Show starts immediately at 8:15 p.m. Tickets available on-line at dateshedmusic.com or at the door. Entry fee is $10. We’ll break it down further; $10/4 bands=$2.50 a band. Coachella Valley Weekly spoke with David Fleming, the mastermind behind ScottsThotProcess.

“One night when I was going over the lyrics I said out loud, ‘What’s this guy’s thought process was anyway?’ I had wanted to keep the STP logo so that’s how the name came about. It’s been almost three years since I’ve been trying to make this tribute happen, even before Scott’s passing. I ran into the former singer of DIRT, now Alice Un Chained, at TerrorFest. I was wearing my Kylo Ren costume and pouring beers when I noticed him in line. We both sang in my dad’s cover band Stone Betty. He said he wasn’t singing in the Alice In Chains tribute anymore. It must’ve been 3 a.m. when I got home and messaged Vince, their lead guitarist and a friend. Vince burst my bubble and informed me that they already had another singer for the AiC project. So I started really focusing on the STP project again,” shared Fleming.

“I had put stuff on Facebook before looking for a band but posted once again and this time an old friend that I had worked construction with replied. It was drummer Anthony Feery. He said he had a guitarist, so I drove over an hour to a town called Phelan. I brought my bass with me and half my PA. A couple months went by and I asked my old friend from high school if he wanted to play bass. I was taking a chance because Jody likes more metal music and stuff like Muse, but he agreed. Jody drove to my house and we ‘road-dogged’ it out to Phelan to rehearse and Darrel joined us from Riverside.”

“We sound hmm..like STP! No BS! Sometimes it’s surreal. Our guitarist is a fucking animal! He is what got me thinking this whole thing could happen. They’re all good dudes! We use LP, Marshall and Fender bass; you know the good ol’ stuff. When we started jamming I was blown away by the guitarist, Darrel! It sounded just like STP!”

“Everything has to be pre-planned with this band. There are no casual phone calls like, ‘Hey you wanna jam today after work?’ but we make it work.”

“As a high school student in the early 90’s, I was heavily into Nirvana, Alice In Chains and Pearl Jam. Honestly, STP was probably 4th or 5th, beat out by Smashing Pumpkins. Soundgarden was a solid 6th or so.”

“We are really hoping to turn some heads and hopefully drop some jaws on May 13th at The Date Shed! We have a 10 song set and then we will learn 10 more songs so that we can be rocking the Rock Yard at Fantasy Springs Casino or wherever else may welcome our respectful representation of Scott’s genius. I think too often people forget the talents of a truly brilliant artist/performer. It is our mission to remind concert goers how great Stone Temple Pilots were when Scott was on his ‘A’ game.”

“Having jumped into this tribute, I started watching STP videos and anything else to study. I realized the magic of Scott Weiland! The creativity stemming from his issues are absolutely brilliant. Among grunge singers, his vocal range from low to high notes is unparalleled, aside from Chris Cornell. On stage Scott really had this connection with the crowd and then there’s the megaphone! I started looking for one immediately and found one that didn’t break my wallet. Noe hit me up during Coachella and mentioned seeing another megaphone on sale at a local store in La Quinta. Monday after Coachella I went and bought that one too!”

“Scott’s death was a tragedy. We all have our vices, hang-ups, insecurities and egos. After all, we are only human. At the end of the day I think what’s important is to keep it real with ourselves.”

Alice Un Chained band members are Mike Tillery on vocals, Vince Pacelli on guitars and vocals, Aaron Lee on bass guitar and Jason Piazza on drums. The band was formed in Chicago in 1995 and moved to southern California in 2003. Reformed by Pacelli, Lee and Piazza in 2010, the band took break in 2014 as Pacelli joined Ozzmania thru 2015. He left Ozzmania at the end of 2015 and the band was back on track in 2016 with the new addition of lead vocalist Mike Tillery. Pacelli praises the inclusion of Tillery, “Mike’s look and sound of Layne Staley is without a doubt the next best thing to Layne you will ever see.”

The current line-up consists of Marcos Gentry on guitar and background vocals, Martin Barrera on guitar, Benny Cancino, Jr. on drums, Dub Wallace on bass guitar and Noe G. Gutierrez on lead vocals. The band was formed in 2014 and played its first show in 2015. They perform approximately 2-3 shows a year and are rehearsed and ready to go. “We love The Cult and look forward to sharing their music with those who may not know them as well. When we started we reminded ourselves how magnificent the music of Astbury and Duffy is. Each song is chosen to best represent their music in a live setting,” Barrera shared.

Mighty Jack is the Everlasting Gobstopper of desert bands. They not only change colors and flavors, but can never be finished, and never get smaller. They are simply indestructible with Charlie Ellis on lead vocals, guitar and keys, Marcos Gentry on lead guitar and background vocals, Aaron C. Ramson on bass guitar and background vocals and Jeff Bowman on drums and background vocals. Their one and only release, Russian Roulette, recorded in 2007, is available on iTunes and continues to stand the test of time. We continue to wait for their second album to be released as they have more than enough new material to fill a double-album. 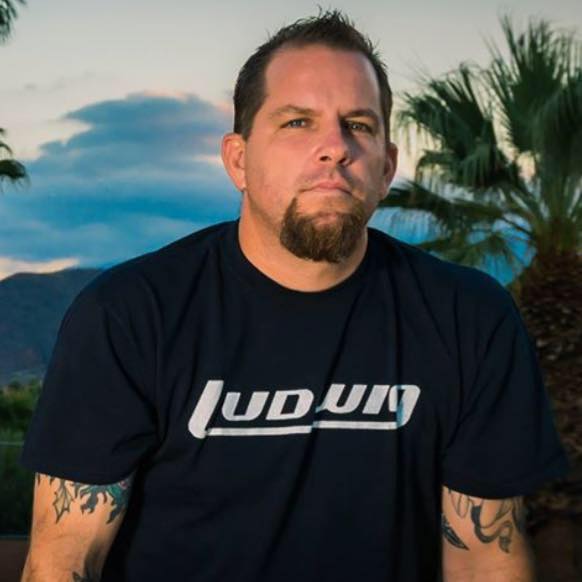 Jeff Bowman has played drums for numerous bands and is one of the most solid timekeepers to behold. Jeff is also one of the most soft-spoken and humble individuals you could engage in conversation with. This show will be memorable for Jeff as he celebrates his 44th year on this earth. On March 11, 1979, Jeff’s father, Hugh, suffered a heart attack and died at the age of 43. Jeff was only 5 years old at the time. Jeff always told himself that a primary goal of his was to make it to age 44. “I’d been dreading my 43rd year since my father died. I’m grateful and relieved to be passed that now, although it feels strange that I’m older than my dad ever got to be,” shared Bowman. Moreover, Jeff’s twin sister Amy passed away at age 19 on October 4, 1992. “I’d also like to honor the memory of my twin sister, Amy, with whom I shared this birthday.” Out of his loss Jeff has forged a full life with his family, business and musical career. So when you see Jeff playing the drums, understand that he plays for more than the passion of performing. He is honoring the memory of his father Hugh and sister Amy.