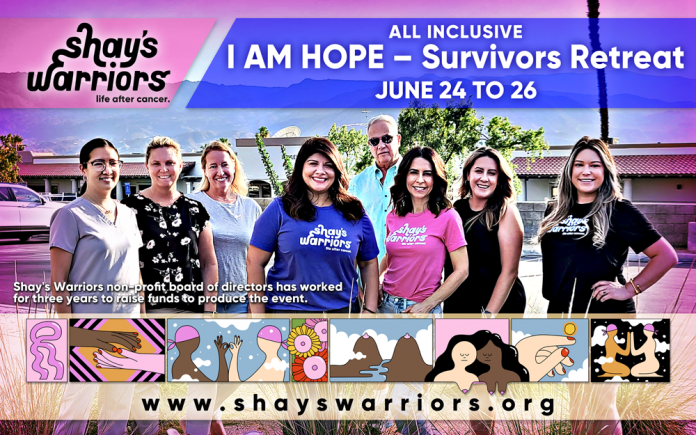 From June 24 to 26, Shay’s Warriors will hold its inaugural I Am Hope Survivors Reset Retreat. June is regarded as National Cancer Survivors Month, making it the perfect time to hold this healing event. This three-day, two-night experience for women focuses on breast and other reproductive cancer survivors and helps them cope with life after cancer and how to move forward.

Twenty-five women have been selected to take part in the retreat held in Palm Springs, where they will experience locally sourced, organic meals whenever possible, small group breakout sessions, and things like hiking, yoga, meditation, journaling, and music. The ladies will partake in dinner together every night to get to know each other. On Friday night, they will kick off by setting intentions with a special grounding ceremony. On Saturday night, there will be entertainment, followed by a beautiful send-off on Sunday.

Prior to meeting in person, the participants are getting the chance to get acquainted with each other online and some are even planning to carpool together to the retreat. Shay’s Warriors will be covering the costs of the retreat.

There were over 78 applications to take part in the retreat, but only 25 spots were available due to funding. Applicants resided across the globe, from Montreal, Canada, to London to right here in our Coachella Valley. Shay’s Warriors has a huge presence on Instagram and Facebook, making it possible for women to connect from around the world.

Founder Shay Moraga was diagnosed with a very aggressive Stage 3 breast cancer in 2016. She had so much support from the community, her friends and family. She was 38 years-old and had a 12-year-old daughter at home.

“It literally was the shock of a lifetime because I thought I was very healthy. I worked out, taught yoga, spin classes, and I ate healthy. I was under 40 years-old, so I didn’t even have a mammogram at the time. Had I not found that cancer by doing a self-check, my doctor said I would not be here today,” revealed Shay.

Per cancer.org, the suggested guidelines for women to start mammograms is between the ages 40 to 44. They are given the choice to start annual breast cancer screenings with mammograms if they wish to do so, as it is rare for a woman in her 20’s and 30’s to be diagnosed.

Prior to Shay’s diagnosis, she had personally donated to Locks of Love for ten years because she knew a lot of children who had cancer. Shay’s aunts from both sides of her family and one of her best friends also had been diagnosed with breast cancer.

“I am a big advocate of doing monthly self-breast checks, especially for women under 40, because we don’t have that opportunity to get mammograms. Plus it helps to know your body, if it looks different, feels different. You will be your own best advocate if something is wrong, and statistics are showing more young women are getting diagnosed with breast cancer,” said Shay.

While Shay was undergoing chemotherapy treatments for twenty weeks, she noticed that some people did not have anyone waiting with them or had the same support system that she did. While sitting in a chemo chair for three to five hours at a time, Shay had a chance to contemplate her situation and the people she was seeing on a weekly basis. Some she would see regularly and others would not return for chemo treatments ever again.

“There were women driving in from Mecca, Thermal, and LA to get treatment, and as far as I’m concerned, we have some of the best oncologists here in all of Southern California right here in our Valley. I encountered a 91-year-old lady who was all by herself returning to her car after treatment. I came to the realization that not everyone has the same supportive friends and community, and some do not have anyone at all,” said Shay.

At four o’clock in the morning every Thursday, before her chemotherapy appointments, Shay would write her blog, which she had named “Life After Cancer by Shay’s Warriors,” highlighting her thoughts, fears, and anxieties that day. She would write to her friends, asking them to send her prayers and good thoughts. 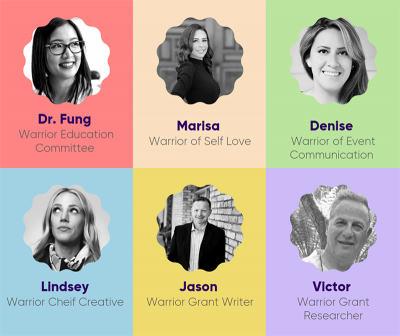 Shay completed her chemotherapy treatments in December of 2016 and was deemed NED (no evidence of disease). During the drive back with her best friend who had flown in to see her, Shay told her that she was so excited but also scared because she wouldn’t be seen every week by doctors and had fears that the cancer would come back.

It is possible for breast cancer in women to return within months or three years after treatment. This possibility troubled Shay, and she sought guidance through therapy and friends, but they were not able to understand her concerns—only seeing her physical improvement. This spurred Shay to start Shay’s Warriors as an outlet for survivors recovering from cancer to meet and connect with one another.

“People see your hair growing back and they think you’re doing great, but it’s not always true. Some of us still suffer from anxiety and scars—not only mentally but physically. I couldn’t look at myself in the mirror because I would cry when I saw the scar across my right breast. It was a reminder that my body had turned against me and I started looking for other women who felt this way,” stated Shay.

In February of 2017, the first Shay’s Warriors meetings took place at Shay’s house with women she connected with. She met with women who had been cancer-free for three years, and as time went on, Shay found herself reaching five years being cancer-free, making the possibility of it coming back very limited. Shay’s Warriors became a non-profit in 2018 and quickly formed a board.

Shay’s Warriors continues to provide monthly virtual emotional support group meetings called Talk Listen Share, where they invite attendees to discuss unique topics that help educate cancer survivors, their family, and friends on how it feels to move forward, reconnect and live life after the cancer treatments stop and the “new normal” begins.

The goal of Talk Listen Share is to help bridge the emotional gap in the understanding among those who have been touched by the trauma of cancer. Discussions take place each second and fourth Wednesday of the month at 6 p.m. Pacific Standard Time. It can be found on Facebook Live or the Shay’s Warriors YouTube channel. Coffee and Connection also takes place once a month, where they do fun activities together like walks, hikes, bike rides and afterwards, go to get coffee.

“I feel that the growth of Shay’s Warriors has been fast. There is a huge need to shed a light on life after cancer. Women and men need connection after going through cancer treatment. Healing is not linear. It might take a few months or several years. They need a community that understands them and we are making sure we are there for them,” said Shay.

There are still some sponsorships available for the retreat, and Shay encourages anyone interested to apply and help give these women the chance to have three days of healing. To learn more about the retreat and Shay’s Warriors, visit www.iamhoperetreat.com.