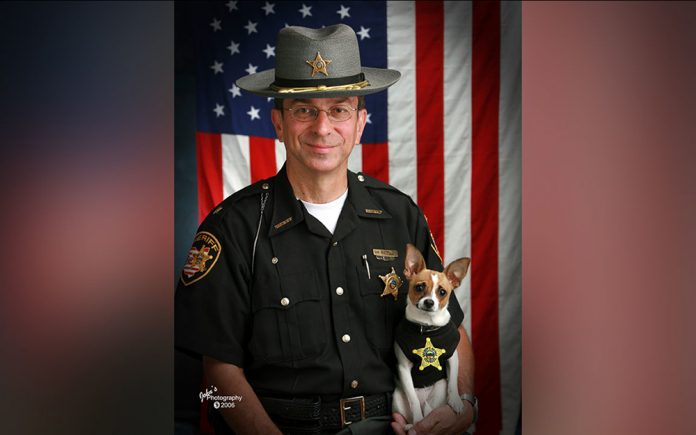 They were inseparable partners on the job, on patrol to keep their Cleveland Ohio community safe.  It was a sad day on April 14, 2021, when retired Sheriff Dan McClelland and his little k-9 partner Midge passed away a few hours apart.  However, it somehow seemed fitting considering how the man and dog were inseparable and their lives intrinsically intertwined.

Retired Geauga County Sheriff Dan McClelland passed away in a hospital at the age of 76, losing his brave battle with cancer.  Several hours later, 16-year-old Midge suddenly passed away at his family home, the Sheriff’s family members suspecting she died from a broken heart.  Dogs know when we are sick, detecting our illness with their powerful sense of smell, and becoming alarmed as our condition worsens.

Despite her miniscule frame, Midge valiantly fought crime.  The bonded pair left an amazing “pawprint” on the citizens of their community, and their passing received media coverage around the nation.  During her service to the community, Midge was recognized all over the world, receiving fan mail from all parts of the globe including Europe, Asia and Africa.  She made numerous appearances on television, always impressing audiences.

Dan McClelland had other ideas when he selected Midge, the runt of her litter, to be his crime fighting companion and ideal drug-sniffing dog.  This spunky adorable 8-pound Chihuahua/Rat Terrier mix was certified by Guinness World Records in 2006 to be the smallest police dog in the world.  She might not have tackled any suspects, but she bravely performed other law enforcement duties.  Unlike large and more aggressive breeds, little mild-mannered Midge would search vehicles without tearing up the upholstery.  She was also the perfect size to search underneath a vehicle.

McClelland’s successor, Sheriff Scott Hildenbrand remembered driving a golf cart with McClelland and Midge in the Great Geauga County Fair.  He reports they had to ride very slowly while swarms of people flocked to them to pet and fuss over Midge.  Hildenbrand recalls, “McClelland would joke that people would see him and would say, ‘Hey there’s Midge and whats-his-name’.  I think she was more popular than him.”  Midge’s arrival everywhere was like bringing Elvis Presley to the midway! 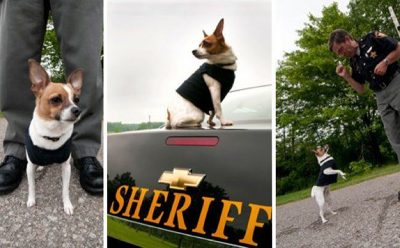 Sheriff McClelland retired in 2016 after 13 years as Sheriff in this semi-rural county near Cleveland.  He spent a total of 44 years in law enforcement.  His last decade as Sheriff was spent with his K-9 trained and capable partner Midge always by his side.  The pair were superstars everywhere they went.  In the office, Midge napped on a bed beside McClelland’s desk.  Her amazing sense of smell never failed to detect the presence of illegal drugs, busting Cleveland area drug traffickers in the cutest way!  However, some of her most important work was done in school classrooms where Midge taught children the importance of serving one’s community and how to avoid danger from strangers.

Midge expertly maintained her K-9 certifications until the pair jointly retired.   When McClelland retired, there was no doubt that Midge would become part of his forever family, joining him and his wife on recreational vehicle trips around the country.

Dan McClelland’s family announced that he and Midge will be buried together.  If you believe that all dogs, with their pure hearts, go to heaven when they pass away, the Sheriff and his dog are now reunited, joyfully patrolling the heavens together!