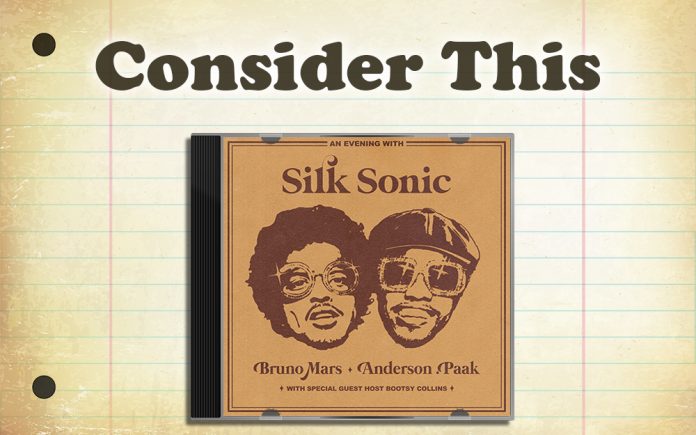 I fell in love last week. Musically, that is. I’m a little late to the party, the record came out in November, and has received a couple Grammy nominations. Somehow, it’s existence snuck under my radar. But me being tardy to the party doesn’t lessen the deep and majestic feelings I have for Silk Sonic’s spectacular debut, An Evening With Silk Sonic.

Silk Sonic is the brain-child of protean Pop/R&B superstar Bruno Mars and his equally talented pal, Rapper Anderson.Paak. Born out of lockdown boredom during the pandemic, the pair weren’t sure if either would ever perform live again, so they decided to go for broke, recording a nine-song set that echoes the epochal Soul and R&B that ruled the airwaves back in the early ‘70s. Not only did they write all the songs together and play the instruments live, splitting singing duties and “going for crazy notes” that they assumed they would never have to replicate live, But they doubled down on the Me Decade verisimilitude by enlisting the help of Soul/funk legend Bootsy Collins.

Something of a child prodigy, Bruno Mars jump-started his solo career back in 2010, garnering favorable comparisons to old school entertainers like Michael Jackson and James Brown. Over the course of four critically acclaimed and commercially successful albums he has already won an astonishing 11 Grammy Awards. Anderson has also achieved critical and commercial success by creating a fizzy fusion of Hip Hop and R&B. Of course, Bootsy Collins is in a class of his own. The legendary bassist made his bones in James Brown’s original J.B’s line-up before forging his own path by forming Parliament/Funkadelic, and finally Bootsy’s Rubber Band. A hero to both Bruno and Anderson, Bootsy came up with the Silk Sonic moniker.

The album kicks into gear with a fun and flirty intro, pithily entitled “Silk Sonic Intro.” A fluttery, free-flowing prologue that blends insistent handclaps, and a walloping backbeat, setting the mood for things to come. Bootsy breezes in and adds his own perspective; “Well alright it is I, Blaster Of The Universe, Bootzilla himself, fellas, I hope you got somethin’ in your cup/And ladies, don’t be afraid to make it to the front of the stage for a band that I name Silk Sonic.”

The intro immediately folds into the first single, “Leave The Door Open. Quivery guitars and percolating keys cascade over an insistent kick-drum beat. Bruno’s glossy falsetto intertwines with Anderson’s pliant tenor and the pair trade verses that are intended to allure and seduce; “I’m sippin’ wine, in a robe, I look good, to be alone, my house clean, my pool warm, just shaved-smooth like a newborn/We should be dancing,’ romancin’ in the east wing and the west wing of this mansion, what’s happenin’?” Languid and urgent in equal measure the result is simply incandescent. The instrumental break, accompanied by exigent “la-la-la’s,” urges the song toward a tumescent crescendo before powering down, spent and sated.

Both “Fly As Me” and “777” offer up greasy slabs of 21st century Funk. The former sounds like the best Blaxploitation theme you’ve never heard. From the opening 1-2-3 count-off, to the boomerang bass lines, the shivery keys and ricocheting wah-wah guitar, the arrangement summons antecedents like James Brown, the JB’s, the Isley Brothers and Curtis Mayfield. Once the syncopated horn section drops in to see what condition their condition is in, you might assume that vocals would almost be superfluous, but you’d be wrong. Bruno floats like a butterfly while Anderson stings like a bee. Cocksure lyrics confirm that their flirtation game is on fleek; “Now have you ever been with a player, take you downtown where they treat me like the mayor, take you to the crib, we can take you upstairs, ‘what’s upstairs?’ Shit, I’ma show you later.” On the hooky chorus, these louche lotharios button up the seduction with this brash declaration; “I deserve to be with somebody as fly as me, somebody this fly, and you deserve to be with somebody as fly as me, somebody this fly.” The whole enterprise cools down on the bridge, then ramps up for the final chorus before stopping on a dime.

On the latter, static-y guitars buzz and strafe over jet-set keys, throbbing bass and an artillery burst of percussion. Love and sex (sex and love?) are momentarily on the backburner as these playas indulge in a different game of chance. Anderson spits verse at a furious clip; “Pretty motherfucker with some money to blow, I’m ‘bout to buy Las Vegas after this roll, I’m ‘bout to buy Las Vegas after this roll, come on 7-7-7, let’s go/Blackjack, Baccarat, dealer where you at, deal for me, woo, give me the tips, give me the tips, give me some magic, go all in, I can see the champagne fallin,’ I got bills to pay, but bills can wait, ah, fuck it, we ballin.” Salted into the mix is a peppery horn section, chicken-scratch guitar, a wash of guiro and a conga-riffic beat. Bruno leaps into the fray, slyly channeling his inner King Of Pop; “Stacks on stacks, racks on racks, Moonwalk to the money like I’m Mike Jack, yes, I’m faded, pupils dilated, but the man in the mirror sayin’ ‘go on, get your paper.”

A triptych of tracks unfurls like an informal song-suite charting the highs and lows of a relationship born from a one-night stand. Guest vocalist Krystal Miles opens “After Last Night,” with a spent and breathy intro that gives Sylvia’s classic “Pillow Talk” a run for it’s money. Lush strings and bloopy synths envelope the the voluptuous melody. Here, Bruno and Anderson trade verses with Bootsy and rapper Thundercat as the song locks into a fecund, post-coital groove. A declaration of new millenium commitment is offered; “If I still had my phone, I’d call every girl I know and tell them goodbye, ah, bye-bye (Uh, toodle-oo, ooh) cars, clothes, diamonds and gold anything you want, anyplace you want it, we’ll fly, fly yeah.” Bruno rips a stinging guitar solo on the break, easily rendering this the best baby-makin’ music since the heyday of Marvin Gaye, Smokey Robinson, the Stylistics, Teddy Pendergrass and Prince.

Sadly, the bloom is off the rose on Smokin’ Out The Window.” Fluttery strings partner with pliant horns, luxuriant synths, willowy guitars, thrumming vibraphone, rubbery bass and a kinetic backbeat. Trading verses, Anderson and Bruno limn the heartache of betrayal. Lyrics paint a vivid portrait of manipulation and cuckoldry; “Must’ve spent thirty-five, fort- five thousand up in Tiffany’s, got her bad-ass kids runnin’ round my whole crib like it’s Chuck E. Cheese, put me in a jam with her ex-man in the UFC, can’t believe it I’m in disbelief/This bitch got me payin’ her rent, payin’ for trips, diamonds on her neck, diamonds on her wrists, and here I am all alone, I’m so cold, I’m so cold, you got me out here smokin’ out the window…” Sure, Sting said “if you love somebody, set them free,” but Silk Sonic finishes out the song with a different perspective; “Look here Baby, I hope you find whatever it is you need, but I also hope that your triflin’ ass is walkin’ ‘round barefoot in these streets, Look out!”

Finally, the moodily elegant “Put On A Smile” opens with a cinematic string section before paring down to a bare-bones arrangement, as lyrics navigate a post break-up landscape. Weepy guitars connect with plangent sitar notes, wily bass and a pulsating conga beat. Much like Pagliacci and Smokey and The Miracles, the Silk Sonic mens spend most of the song trying to camouflage the heartbreak; “If I could turn back the hands of my Roly, you know I would, I would’ve spent all my time makin’ sure that my baby good, I’m tryin’ hard to hide the shame, I know I’m playin’ a dangerous game but since you’ve been gone I ain’t been the same, there’s only so much a man can fake/Oh, not tryna to be the life of the party, oh, not buyin’ shots for everybody, but it’s all an act, I can’t have you back, without you I been goin’ crazy, tryna put on a smile, tryna fight these tears from cryin’ but Lord knows I’m dyin’ tryna’ put on a smile Baby.” A propulsive horn section and sympatico keys are filtered in sparingly, but drums gather speed on the panoramic crescendo as Bruno’s acrobatic falsetto leaps in and sticks the landing.

Silk Sonic closes out this splendid nine-song set with a couple of bangers. On “Skate” lithe horns, lush strings bee-stung bass, piquant sitar and shang-a-lang guitars are wed to a pounding beat. Honeyed harmonies wrap around lyrics pay fealty to a roller-boogie babe. The opening couplet alone is worth the price of admission; “In a room full of dimes, you would be a hundred dollars, if bein’ fine was a crime, Girl, they’d lock your lil’ fine ass up in a tower.” The melody and instrumentation echo the exuberance of Michael Jackson’s Off The Wall era as well as polished Yacht Rock staples like Pablo Cruise and Boz Scaggs.

The final track, “Blast Off,” immediately achieves lift-off, locking into an imperial intergalactic groove. The melody is buoyed by an ethereal string section, rippling synths, liquid keys, sinewy bass lines, stately piano and plush guitars. Unabashedly sensual lyrics tease out an invitation to some extraterrestrial wonderland; “Oh let’s tip-toe to a magical place, blast off and kiss the moon tonight, and watch the world go crazy from outer space, blast off into the sky.” On the break, Bruno unleashes a cyclonic guitar solo that feels like a sideways homage to His Purple Majesty, the late-great Prince. But it’s Bootsy who gets in the final word; “Blast off straight to some good vibrations, can we take it higher (oh yeah), all the way from the stratosphere sendin’ love from up above, Happy Trails Baba.” It’s a brilliant finish to a pluperfect debut.

For me, this album magically transports me back to my L.A. childhood, exploring the not-so-mean streets of Hollywood, coveting my cousin Anthony’s blue 1969 Schwinn Stingray three-speed (banana seat, no sissy-bar) and watching Soul Train on Saturday afternoons. A time when “la-la-la-la-la- la-la-la-la” meant I love you, and we were all “digging the scene with a gangster lean” even if we weren’t quite sure exactly what that entailed. An Evening With Silk Sonic is by turns sleek, sly, salacious and sincere. It’s break-up-to-make-up, booty shakin’ Soul.

Their music effortlessly conjures comparisons to Blue Magic, The O’Jays, The Main Ingredient, Al Green, The Delfonics, The Spinners, David Ruffin, Bloodstone, Stylistics and Billy Preston, without ever feeling derivative. Silk Sonic has distilled all those influences and given them their own 21st century spin. This is one of those records that feels like an instant classic.