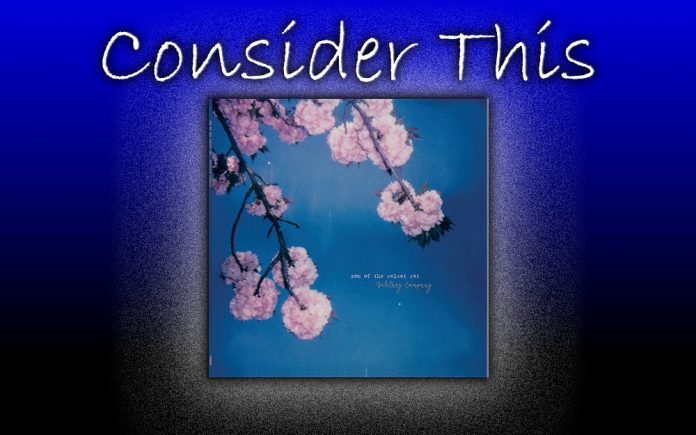 “There’s a lonely spirit in the heart of every crowd,

And a secret parallel world behind the clouds

And the darkness like the shadow of a manta ray

Hovering above our heads on a summer day” That’s Son Of the Velvet Rat, parsing the mysteries of life on “Beautiful Disarray,” a song off their new album, Solitary Company.

Somewhere between Leonard Cohen’s tower of song and the arcane Country-Punk of erstwhile Portland band, Dead Moon, stands Son Of the Velvet Rat. Georg Altziebler and Heike Binder are the sonic architects behind the band. A native of Austria, Georg picked up the guitar at an early age and absorbed myriad musical genres. Equally inspired by ‘60s Garage Rock, ‘70s Punk and the French Chansons of Jaques Brel and George Brassens, he also embraced outliers like Dead Moon and Green On Red from Los Angeles. He cut his musical teeth in bands like Pure Laine and Bloom 5, but by the early 21st century, he was itching to strike out on his own. It was around this time that he met Heike, who had been making a name for herself as an artist. Their connection was immediate.

Georg was in the process of forming Son Of the Velvet Rat, which included bassist Albrecht Klinger and drummer Muck Willman. Despite no formal musical training, Heike soon joined the line-up adding accordion, keys and synergistic backing vocals. Their music, much like the band moniker was meant to be mysterious and memorable, cross-pollinating idioms and defying expectations.

The band hit the ground running, writing, recording and touring at an accelerated clip. The next decade saw the release of four EPs and nine long-players. Critical acclaim was swift and nearly unanimous. Their reputation as a live act gained traction when Americana Folk-Laureate Lucinda Williams caught a SOtVR set at the Hotel Café’ in Los Angeles. She became a very vocal fan, consistently singing their praises.

By 2015, Georg and Heike had forsaken their home country for California, quickly settling in the desolate surroundings of Joshua Tree. Artists and musicians have been making pilgrimages there for more than half a century. Trailblazers like Gram Parsons, Donovan and Eric Burdon began visiting and putting down roots in the ‘70s and ‘80s, followed (Hi-Desert Doyenne) Victoria Williams, Mark Olson, Fred Drake and (unofficial musical Mayor of Joshua Tree) Teddy Quinn. Like Bloomsbury at the start of the 20th century, Paris in the ‘20s, or Laurel Canyon in the ‘60s, the small town, set at the edge of the National Monument, has provided respite for any creative type looking to escape the claustrophobic sprawl of life in the big city. Relocating there vividly informed SOtVR’s next album, the desolate and noirish Dorado. Production chores were handled by musician/producer Joe Henry (Solomon Burke, Aimee Mann, Ani DiFranco, Loudon Wainwright), the record was mostly recorded in the Hi-Desert, aided by local luminaries like Victoria Williams, Faith Chinnock, GarRobertson and Bob Furgo, who had also become fast friends.

Dorado was embraced by critics and fans alike and was featured on several taste-making Top 10 lists. Not letting much grass grow beneath their feet, soon they were back on the road. In 2018 they released The Late Show, a potent document of their most recent tour. Later that year they recorded a fifth EP, Desert Songs 2 and 2020 saw the release of Monkey Years 2, a collection of cover songs that, you guessed it, was preceded by a first volume, 2010’s Monkey Years.

Back in the Hi-Desert, the pair hunkered down at Red Barn Recorders with the usual suspects to make their 10th LP, Solitary Company. Recording commenced before the pandemic hit, overdubs happened in their home garage and the album was completed in Graz, Austria, where Georg and Heike typically spend their summers. (It’s where they’ve remained as COVID 19 has raged on).

The record shimmers to life with the dusty mirage of “Alicia.” Woozy melodica, wheezy harmonica and shivery autoharp lattice atop churchy keys, swoopy violin, swirly guitars and a brushed beat. Georg’s flinty vocals feel equally world-weary and innocent as he confesses “I’m the paint brush, not the painter, I just want to entertain her, please my new friend Alicia and make her stay.”

Georg’s mien is typically wry and laconic, as though he’s one cool remove from the action, content to offer trenchant observations or nonchalant narration from the margins. But a couple of tracks feel wholly personal and simply cut to the quick. “11 & 9” opens with shuddery upright bass and clanky percussion, before giving way to beatific backing vocals, feathery hurdy gurdy, sinewy guitar and shadowy organ notes. The emotion is palpable as he issues a tender invitation; “Lay with me by the levee, on a blanket under the pines, I know your dreams and you know mine.” Between spins at the roulette wheel and sharing bottles of wine the couple celebrates an anniversary as Georg quietly concedes “You make me a better man.”

“The Waterlily & The Dragonfly” is even more emotionally naked and stripped-down. Armed with only his acoustic guitar, Georg constructs an ethereal ecosystem where he is the waterlily to Heike’s dragonfly. “…I’ll be your lovely waterlily, you’ll be my dragonfly, can’t you see it’s surely going to kill me if the pond runs dry.” His fleet and filigreed fretwork underscores the song’s fragility.

On a record stacked with superlative tracks, four stand out from the pack. “When The Lights Go Down” is a sandblasted chanson that weaves a tapestry of high-lonesome harmonica, fuzz-crusted guitars, willowy accordion and slippery bass atop a slow-mo Second Line groove. Restless lyric roam the Hi-Dez, name-checking locals-only watering holes; “I’m going to take Avalon to Landers Brew, find me a friend & companion for a drink or two, among the blind & the lame, the lost & the found, & we’re all the same when the lights go down.” As spectral harmonies cocoon Georg’s sepulchral croon, he yearns for a peaceful existence; “build me a cabin when it starts to rain, wait for the flood on the desert plain…” but reality intrudes as he instructs “wash away the fingerprints, get rid of the gun.” A skittery guitar solo on the break only heightens the sense of desperation.

“The Only Child” shares some musical DNA with the Garage Rock/Folk chestnut, “Hey Joe.” Blurred Fender Rhodes and fluttery organ notes connect with sunbaked guitars, tensile bass lines and a rattletrap beat. As lush backing vocals cradle Georg’s rugged rasp, he wraps it around some labyrinthine wordplay that unfurls in fits and starts; “I’m an only child, you’re lonely too, lonely & wild, she said and she smiled, but only a child/I came so far for your broken tunes, diamonds & tar, birthmarks and scars is what they are.” Gauzy e-bow guitar accentuates the lyrics’ love or confusion.

The title-track simply aches. A creamy string section, that straddles the line between Barry White and The Sound Of Philadelphia, partners with clackity percussion, roiling bass, plaintive hammered piano, chimerical guitars and cascading hurdy gurdy notes. Cryptic lyrics offer glimpses of a solitary journey that takes a noirish turn; “Green blanket on the queen-bed, blood stain on the frame, voices coming through the sink, I thought I heard your name.”

Meanwhile, the aforementioned “Beautiful Disarray,” simply pulsates with life. Hammond B3 colors and smoky harmonica fills slither around serpentine guitars, thrumming bass lines, a percolating horn section and a rock steady beat. Here, Georg easily admits “there’s a soft & very gentle twist in my reality.” On the break, the horn-section swoops and swings in sly syncopation as harmonica notes fracture in the echo and sway.

The action accelerates on both “Stardust” and “Ferris Wheel.” The former is anchored by slashing guitars, whistle-y theremin, prowling upright bass, nimble organ runs and a locomotive rhythm. The rollicking melody and caffeinated arrangement provide cover for vulnerable lyrics that are just looking for a little emotional rescue; “Slow me down before it’s now or never, break the hands of time before I’m old, hold me when I want to sleep forever, let me lie beside you when I’m cold.”

The latter is something of a baroque hoedown. Plucked guitar riffs, husky harmonica, rippling mandolin, coquettish accordion and spidery bass lines are wed to a ramshackle rhythm. Tart lyrics remind us that life is like a carnival ride where “the sky is liquified, satin steel & cyanide, there’s a long line for the rollercoaster & rain is falling from my eyes.”

The album closes with “Remember Me.” Something of a restless farewell, it’s powered by thready theremin, frayed fiddle, gritty guitars, mournful hurdy gurdy slip-stitch hi-hat and percussion. Wistful organ embroiders the the edges of the melody as Georg offers some hard-won wisdom; “Memory lane is just a dirt road on the Mesa.” He also speaks to the desiccated charms of their adopted home; “All of that dust in the air just adds to the beauty, & the sun’s going down behind the pink velvet veil.” A sepia-toned slide guitar solo intensifies the solitary mood. It’s a melancholy end to a magnificent record.

Son Of The Velvet Rat Packers Albrecht Klinger and Muck Willmann were on hand for slide guitar, bass, drums and percussion, respectively. Lucio Menegon added guitar, Eric McCann and Jim Austin held down the low end on bass. Sebastian Rochford pounded the drum kit, Mathias Loibner handled the hurdy gurdy, Dominik Krejan played Fender Rhodes and Anthony Patler manned the Hammond B3. The string section was comprised of Emily Elkin on cello, Heather Locke on viola, plus Kaitlin Wolfberg and Eric Clark on violin. Scott Kisinger (Drago) was something of a one-man horn section tackling trombone and trumpet. Backing vocals were provided by the Blind Boys of the Desert, along with Gayle Myers, Angela Primm, Rosa Pullman and Valcine Brown. Hi-Dez hometown heroes included Bobby Furgo on Fiddle, the legendary Danny Frankel on drums and percussion, as well as Gar Robertson who co-produced the record and played mandolin, fuzz guitar and hammered piano. Heike supplied theremin, accordion, autoharp, organ and backing vocals and Georg was responsible for lead vocals, electric, acoustic, nylon string and e-bow guitars, plus melodica, harmonica and percussion. (Phew). As much as Son Of The Velvet Rat would prefer to remain mysterious and enigmatic, occasionally they wear their hearts on their sleeves. Solitary Company is an aural chiaroscuro, bathed in shadow and light. Lyrical silhouettes give way to vivid vignettes haunted by magnetic melodies. Graz gravitas giving way to California sunshine.