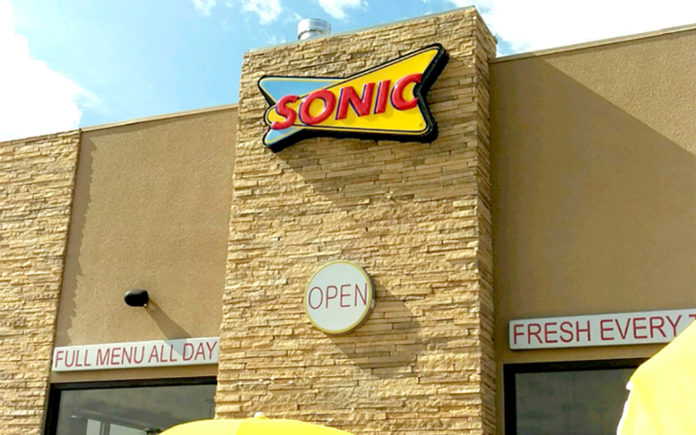 Fast food served in a bee-bop throwback style is now available in Indio with the opening of Sonic off of Jefferson, near the I-10.

It seriously seemed like it took forever for the unique quickie food spot to get finished, since their groundbreaking last December. But with the Labor Day weekend opening, impatient Sonic diners can now have their fix. As an Eastern Valley resident, I kept tabs on their progression; it produced a strange kind of anticipation for me. I have stopped by the Sonic in Cathedral City several times in the past, mostly for their delicious soda concoctions. I found their Diet-Limeade especially refreshing during our scorching summer months. They even have their own Happy Hour from 2pm to 5pm every day, where all sodas are half off!

They also put out all kinds of other specials from time to time too, like .50 Corndogs. The Jetsons futuristic styled building is set up as an old school 1950’s Drive-in. Their Indio location however, has a more of modern look, complete with a sleek stone wall exterior, neutral color tones and what appears to be an outdoor fire feature, sure to be appreciated while dining on the patio when cooler temps arrive. Even though their East Valley location may look a little El Paseo, the old school theme stills shines through. Think Happy Days or American Graffiti…where waitresses wearing roller skates, called carhops, would serve you food while you wait in your car. Or even the movie Footloose, when Ariel gets busted by her dad for dancing in the parking lot of the local Drive-In burger spot. Yep, that kind of service is still happening.

It’s super cute. Just in case you have never experienced this kind of restaurant, here’s how it goes. There is a standing menu at each provided car slot surrounding the restaurant. After you decide what you want to order, you press a button on the intercom and a well-mannered person answers and takes your order. A few minutes later, a carhop, literally rolls up on skates and delivers your food. Again, this may sound simple enough, but in a world where fast food service is just that, it’s nice to have a taste of nostalgia from the 1950’s. And if you’re not the, “I like to eat in my car” kind of person, this new Sonic offers comfortable indoor dining, which their Cathedral City location does not.

Sonic actually started out as a root beer stand by a former bread delivery guy named Troy Smith back in 1950’s Oklahoma. The Drive-In eatery has sustained itself throughout the years celebrating its’ 50 anniversary in 2003. The menu offers a wide array of items for a fast food joint, including but not limited to, Breakfast Burritos and French Toast Sticks for breakfast, bountiful burgers from regular to Double Bacon Cheeseburgers, to the huge Bacon Cheeseburger Toaster. Hot dogs such as a Cheesy Bacon Dog, Chicago Dog and Pretzel Dog join the menu, as well as chicken fare with a selection of sandwiches, boneless wings and more. Of course there are plenty of sides to accompany your meal, such as yummy crispy Tots and Fries (both can be smothered with chili and cheese), Onion Rings and Ched-R-Peppers.

And if you’re looking for dessert, their choices are sure to put your sweet tooth into the dentist chair. Try out one of their many Master Shakes like the Peanut Butter Fudge Shake or Strawberry Cheesecake Shake, or one of their other ice cream creations including Waffle Cones and Sundaes, their list of sweets goes on and on. There is seriously something for everyone.

Sonic off Jefferson is opened daily until midnight on the weekdays, and 2am on the weekends. It is a fun and welcomed addition to our Eastern Valley fast food scene. I look forward to enjoying my neighborhood Sonic Drive-In, for some good old fashioned fast food and 1950’s style service. I think that Peanut Butter Fudge Master Shake has my name written all over it…Yikes!!