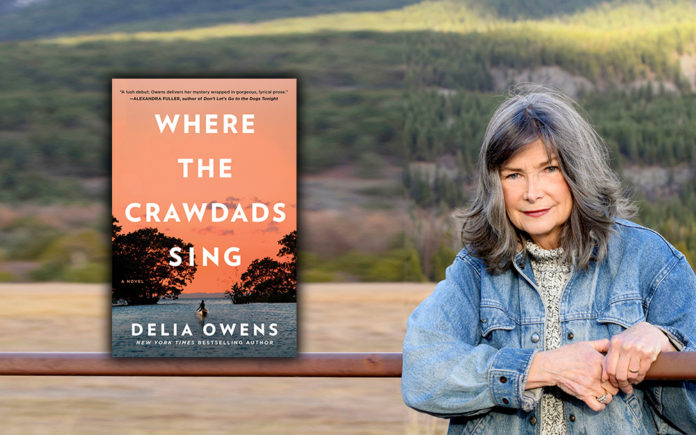 —–
Where the Crawdads Sing
by Delia Owen – Fiction
—–

Our species is a social creature.  Human beings need human beings.  In Delia Owens Where the Crawdads Sing (Putnam, 370 pages) a child learns about people from the wildlife that surrounds her.

The story takes place in the marshland on the North Carolina coast.  Kya is six-years-old when her mother abandons the family.  Within weeks, her older siblings leave and she is left living in a shack with her abusive, alcoholic father, who soon also disappears for good.

With no food in the house, no one to buy it and or cook it, Kya goes into town for some grits.  Barefoot, wearing rags, and her hair a mess she is teased and shamed by local kids and adults.  They call her “Marsh Girl.”

Kya doesn’t know how to read, write, or count and she must figure out how to survive alone.  But, she finds comfort in the incredible wilderness and the creatures that inhabit the marsh.  Her friends are seagulls.  She collects shells and feathers.

Kya figures out how to use her father’s old boat and motors around the marsh where she gets lost and fortunately runs into Tate, who was once a friend of her bother.  Tate guides her back to her shack.  They share a love for the natural world and Tate eventually teaches Kya to read, providing her with science books.

When Kya comes of age in the marsh, the local boys come out to her shack to harass, and catch her, but she’s never around to be caught.

Eventually, Kya becomes a published expert on the marsh, having learned all the scientific names.  She paints and labels her incredible collection of shells, feathers, and plants.

When the community’s favorite son turns up dead in the marsh, Kya is arrested for his murder and a local jury, once again, judges the “Marsh Girl.”

Kya is a fascinating character.  She’s an innocent child living on her own in the wild who learns that human beings are the one creature she can neither understand nor trust.  It creates conflict in her as she desires to connect with people, but doesn’t know how.  So she keeps her distance, hiding, and observing them the same way she does nature.

I enjoyed the relationship Kya had with Jumpin’ and Mable, the black couple who kindly gave her space, but guided and protected her from a distance.  When she goes to visit them, keeping to the side of the road out of view as usual, she sees them being mistreated.  She is angered, and then confused that Jumpin’ does not fight back.

There are many moments in the book that the reader observes without the author providing further narrative.  This is often engaging while at other times I needed more.  I wanted Kya to talk with Jumpin’ about the incident so she could gain more insight into the ugliness of human beings.  A side she had not known or witnessed even in her abandonment.  This conversation would have added a meaningful and more powerful theme.

As a young woman, Kya is starved for love and companionship.  So she hooks up with the despicable townie who ends up dead.  During the trial, some of the people on the jury are those who knew Kya as a girl and the reader discovers that several had compassion for the child giving her extra change, adding more food to her grocery bag or letting her move about unseen.

Author Owens does a beautiful job describing the marsh’s ecosystem, the native plants and creatures.  Although, I wanted to see Kya cope with other dangers than humans such as bug stings or an occasional deadly snake.  No snakes in this story other than the human kind.

I was never positive if Kya was a black or white girl until page 222, where I was finally certain she was a white girl.  I liked the ambiguity while it lasted.

At the trial, Kya finally gets to see the people who care about her.  There is a happy ending as Kya is free to live her life as a bestselling author and naturalist on her own land, where she and Tate finally become a couple.

But, there is a twist that came as a surprise.  Thematically, the twist [no spoiler here] was lost, and I felt it was unlikely considering Kya’s character.  The motivation is not clear, satisfying or believable.  In fact, I was disappointed when I finally learned what actually happened to the dead guy.

Yet, people are weird and no matter how much we think we may know someone, we don’t.  For Kya, growing up alone surrounded by the beauty and grace of nature didn’t make her any different than any other broken human being trying to survive this unpredictable world.