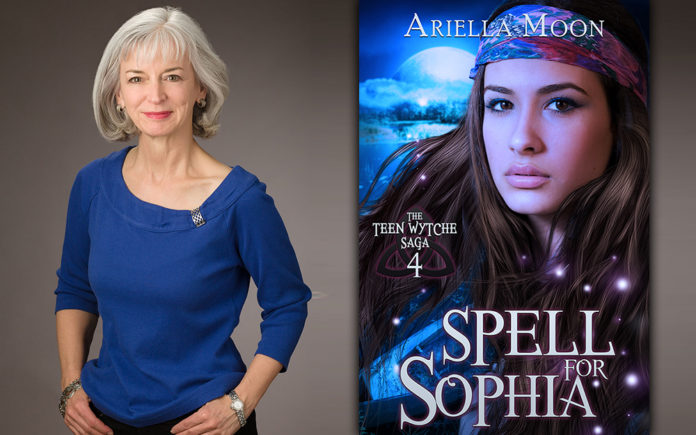 Art is many things and the written word is a part of the arts. We sing lyrics. We recite poems. We view art that includes letters and words. We read books. All these genres spark our imagination. The arts take one to distant worlds or deep within one’s souls.

Local Author Ariella Moon bridges many worlds. Born Karen Morison-Knox this art history major transformed into her true self, Ariella Moon. Along the way she has curated art, raised a child, helped solve crimes, wrote several books and novellas, and discovered the spirit within.

“I describe myself as one who spent her childhood flying to rooftops in my dreams and searching for a magical wardrobe that would transport me to Narnia,” said Ariella. “I suffered from extreme math anxiety and was often mistaken by taller students for a leaning post. Despite these horrors, I graduated summa cum laude from the University of California at Davis. I live a nearly normal life, doting on my extraordinary daughter, two shamelessly spoiled dogs, and a media-shy dragon.”  Five minutes with this petite powerhouse and one knows there is so much more, like a book cover that draws one in, the pages keep one engaged.

Ariella began writing young adult fiction for her daughter. “My daughter was precocious and a ferocious reader. I began to write to keep her interest in reading. The Teen Wytche Saga series began with Spell Check. I am now about to publish the fourth book, Spell for Sophia.”

“Each book, like my daughter’s move into adulthood, introduces a teenage girl facing progressively more adult situations. The commonality between the novels is a spell book. The ever-morphing grimoire is itself a character. Its magic changes with each girl who possesses it and it helps the protagonist learn the truth about herself. The growth of self-awareness allows each character to see that success comes from within and not from magic. Coming of age is a journey of friendship, sadness, joy but always to the realization that within we each have the power to control our lives.”

“While I drew upon my experiences as a shaman and my own teen angst to create this magical series, the books are less about magic than they are Empowerment. The magical realm exists but it is not a crutch. The Teen Wytche Saga is a series of sweet contemporary paranormal romances but ultimately they are about the inner strength that guides these young women to self-realization.”

“I am a shaman. And like my work, the paradigm is being grounded in the universal and keeping up in the particulars. I am meticulous in my work. My Two Realms Trilogy is a medieval Scotland and Fairy fantasy adventure. To be true to the characters, I had to be true to their environments. Without that truth the work would falter.”

My latest book Spell For Sophia will be available May 2018. I am wrote this book with the same attention to detail as the Two Realms Trilogy. This book centers on Sophia. Deceived and kidnapped by her outlaw bio-parents, Sophia resorts to thievery and arson to escape. Fate delivers her into the arms of Shiloh Breaux Martine and his grand-mère, a voodoo priestess living deep in the bayou. Breaux knows Sophia’s survival depends on her mastering magic and the supernatural.  To protect her Breaux will time travel through New Orleans’s dangerous past and risk his bright future to protect her. “

“The themes of Spell for Sophia are more mature but continue the series progression. Survival. Trust. Growth, the universal themes set in the particulars of one’s own growth – that is the key to Ariella Moon.”