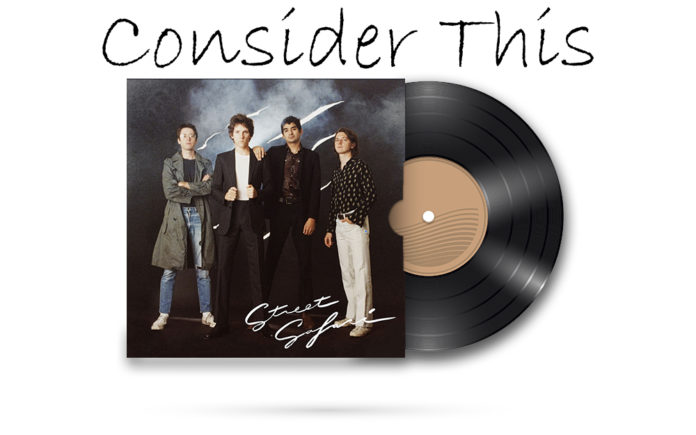 For music lovers, few things in this world are more thrilling than discovering a new artist or band. Conversely, nothing is more disconcerting than buying  said band’s follow-up  and realizing they’ve executed a stylistic 180. Be prepared for that experience if you buy the new Public Access T.V.

The New York four-piece has only been a going concern since 2014. Originally from a small town outside Nashville, John Eatherly (Guitars, lead vocals), relocated to NYC in 2008, following the demise of his first band, Be Your Own Pet. He spent a few years working as a musician for hire, touring and collaborating with bands like the Smith Westerns and the Virgins. In between paying gigs he still found time write his own music.

When the time was right he approached ex-Virgins guitarist Xan Aird and drummer Pete Star. Pete had recently held down the kit for up and coming indie bands like Oberhofer and Library On Fire. Bassist and old pal Max Peebles completed the line-up.

The guys holed up for months honing their sound. Settling on the moniker Public Access T.V., (sometimes abbreviated as P.A.T.V.) they kinda-sorta signaled their sonic intent, offering up a sideways shout-out to seminal Punk and Post-Punk influences like Television and Public Image Limited (P.i.L.).

They booked their first real show in early 2014 at a friend’s dive bar in the East Village. Somehow the word got out and the place was packed with hipsters, record label reps and several close friends. The buzz surrounding the band felt supersonic. Their first single, “Monaco” was written one day, recorded the next and quickly uploaded on a music sharing site.

The music press took notice and a bidding war broke out between labels. Polydor won out and the band snagged a high-profile gig opening for Post-Punk icons Gang Of Four. Unfortunately, while they were on tour in early 2015 they received word that the NYC building that served as their living quarters and work space went up in flames. Two other buildings on the same block were also gutted and, tragically, two people died. (An illegal gas-line was the culprit, installed by the woman who owned all three buildings. She was subsequently charged with manslaughter).

Although it was nothing compared to the loss of life, the band lost all their possessions, including the recording studio they’d installed. Homeless, they crashed with friends before heading back on the road with the Palma Violets. They released a six-song EP and headed to England to flesh out their full-length debut.

In the midst of making the record, Polydor dropped them, but they rebounded, landing on Cinematic Records. Most of their debut was recorded in London, the finishing touches in New Jersey and Nashville. Entitled Never Enough, it arrived in late 2016 and justified all the anticipation. Their sound perfectly distilled myriad Styles: Punk, New Wave, Power-Pop, Glam and Post-Punk. It honored their influences without ever feeling purloined or derivative.

Critical acclaim was unanimous, even though tedious comparisons to early aughts Rock N’ Roll saviors like the Strokes and Interpol seemed lazy. The band returned to the road. In between headlining smaller club tours, they increased their fan base opening for Post-Punk pioneers like Pixies, the Killers and Dinosaur, Jr.

The band returned to the studio in 2017 with musician/producer Patrick Wimberly. Originally half of the Synth-Pop duo Chairlift, he has produced acclaimed records for Beyonce, MGMT, Blood Orange and Solange. The result Is an 11 song set entitled Street Safari.

The album’s first three tracks, “Safari (In My Head),” “Shell No.2” and “Your God And Mine” set the tone for the entire record. Between the ambient jungle sounds, aggro synths, hints of marimba and stuttery beat, “Safari…” sounds like a lost outtake from Duran Duran’s epochal “Rio” album. In the midst of this uncharacteristic fluffiness, lyrics flip-flop between staying in one’s head and living in the real world; “The things you refuse to learn will stab you in the back/Knowledge is power, and we need more than that.”

“Shell Game…” is powered by icy keys and a hopscotch rhythm. Fey, falsetto vocals draw comparisons to louche, early ‘80s sensations Kajagoogoo, (not in a good way). The song splits the difference between dayglo New Wave and exaggerated Girl-Group melodrama. And, oh yeah, the lyrics seem to suggest light S&M role play; “Well, I saw you with them boys in leather, your whip cut me and I felt better.” Hopefully the parties involved have agreed upon a safe word.

On “Your God…” whooshy synths, squiggly guitars and stabby keys break over an Industrial beat. Lyrics shine a spotlight on religious confusion. Unfortunately, these platitudes never measure up to the deadpan wit of Depeche Mode’s “Personal Jesus.”

And so it goes. Gone are the muscular guitars, stripped-down arrangements and downtown swagger. From the sputtery, cowbell Funk of “Lost In The Game” to the facile and portentous “Meltdown,” which sounds like it could score an ‘80s Afterschool Special about the dangers of teen anorexia, the songs on this record burrow deep into a rabbit hole of Synth-Pop clichés.

“Wait It Out” poaches the staccato Disco swoop of the Bee Gees’ “You Should Be Dancing.” Meanwhile, the action slows to mid-tempo on the plinky-plunky “Ain’t No Friend Of Mine.” The lyrics seem to blur the line on a “friends with benefits” scenario; “Ain’t no friend of mine baby, just a face I see sometimes, I’ve seen it all around lately and I look the other way/All-up-on-my-mind lady, seems you’re all that I Can see, I swear she wasn’t my lady, yes I swear that wasn’t Me.”

Three songs actually possess the fire and fury of their debut. The first single, “Metro-Tech is synth-driven and features a boogie-oogie-oogie bass lines, layers of honeyed guitars and an infectious handclap beat. But the mood is effervescent and impossible to resist. This song wouldn’t seem out of place in a wacky montage for late ‘80s Coming-of-age comedy like “Just One Of The Guys” or “Can’t Buy Me Love.”

The confessional “Too Much” blends electric piano, thumpy bass lines and a martial cadence. Clever lyrics give 21st century problems a Dylan-esque twist; “You wore a mystic disguise, like the lowland lady with the sad eyes, I played a part that I read, a New York romantic that’s fucked in the head/I thought we felt the same way, but I got no patience and I’ll take the blame, I had to block you again, cause I’m overseeing things you did with him.”

“Rough Boy” is a rousing return to form. A Punk Pogo-tastic attack, fueled by an itchy back-beat and stripped-down guitars. Erudite lyrics tackle armed service hyperbole; “Come and see the world with us, be all you can be it’s free!/17, can’t write or read, another piece of the war machine.” Guitars strafe over an accelerated rhythm as band soldiers on; “Make my check

out to my mom, PTSD from a bomb, lost my mind in the desert sun, the recruiter told me this would be fun.” The song offers a glimmer of hope that the band isn’t just a one album wonder. “Street Safari” closes mired in the lugubrious sludge of “The Quicksands.”

This record isn’t unpleasant, it just feels like a place-holder. Maybe they were inspired by New Wave innovators like Talking Heads and Tears For Fears, but anyone who fell in love with the wiry equanimity of Never Enough is bound to be disappointed. Hopefully P.A.T.V. is just experiencing growing pains. Street Safari  is an interesting detour, but not much more.