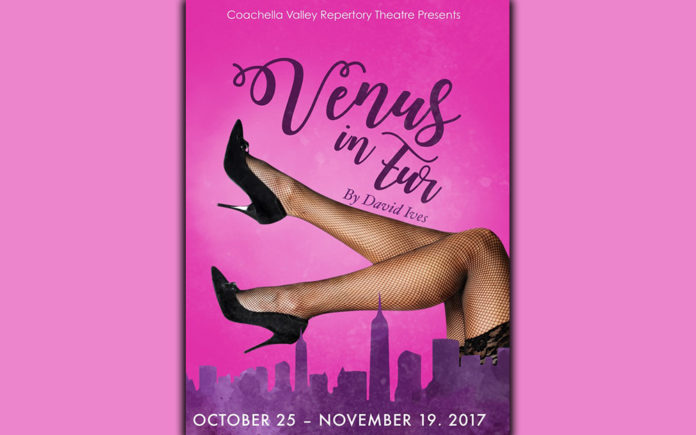 Stella Adler said; “Actors need a kind of aggression, a kind of inner force. Don’t be only one-sided, sweet, nice, good. Get rid of being average. Find the killer in you.”

There’s little doubt in the mind of anyone who sees Coachella Valley Repertory’s production of “Venus in Fur,” that actress Angela Sauer, has found the inner killer in her performance as the brash, sassy, New York Actress, Vanda Jordan.  Sauer has the astounding ability to instantaneously transform characters, as she jumps between roles as easily as flipping a switch.  Her brilliant performance is most certainly one of the primary reasons to see this show.

Venus in Fur, is a Tony Award winning two person play within a play, written by David Ives.  The script twists and turns the actor’s roles until your head is spinning and the adrenaline is pumping, as you take another spiral towards a new revelation.  Mr. Ives is a former Guggenheim fellow in playwriting and a graduate of the Yale School of Drama.  His pedigree is obvious in his writing. 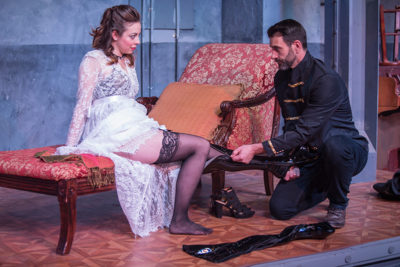 Thomas Novachek, performed wonderfully by Patrick Zeller, is the writer-director of a new play opening in New York City, who has written an adaptation of the 1870 novel Venus in Furs, by the Austrian author Leopold von Sacher-Masoch, which happens to be the novel that inspired the term “masochism”.  After a day of exhausting and fruitless auditions Thomas is giving up on finding the perfect actress for his leading lady, until a frazzled, unexpected late arrival catches him completely off guard and leads to a very unexpected audition.  Vonda, sharing the same first name as the character she’s auditioning for, initially seems unprepared, but continues to pull props out of her oversized bag that make it clear, she’s prepared for all occasions.

The script reveals the bold, sexy, good, bad and ugly dynamics that can play out between men and women, sometimes blurring the lines between reality and fantasy.  From the onset, one is never quite sure whether it is the actress or the director who is conducting the audition, but proving the adage that hell hath no fury….

Ron Celona’s directing demonstrates why CV Rep has such a stellar reputation.  Each movement had purpose and seemed to support the scripts intent.  The crew and tech talent on this show was top of the line.  Jimmy Cuomo’s set design, Randy Hansen’s sound, Julie Onken’s Costumes. Lynda Shaeps’ hair and Moira Wilkie Whitaker’s overall Technical Direction brought the various elements of this production together like a perfect symphony.

Venus in Fur, is not a show for children, but it is highly recommended for any adult theatre-goer who is looking for a stage bursting with award winning talent.

Dee Jae Cox is a playwright, director and producer.  She is the Cofounder and Artistic Director for The Los Angeles Women’s Theatre Project and co-producer of California Woman 411. www.californiawoman411.com.