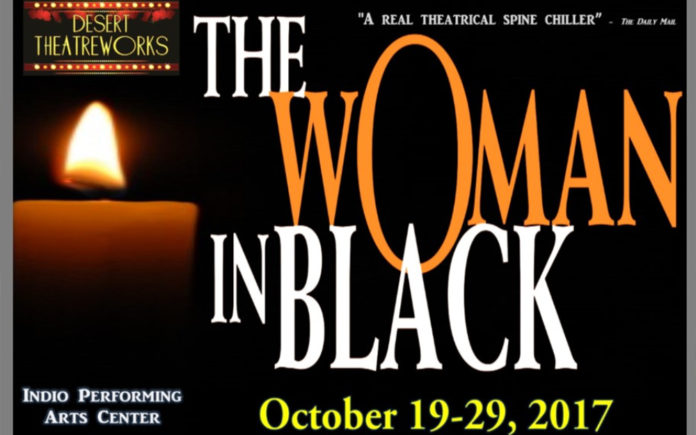 “Doubtless, in such a place as this, with its eerie marshes, sudden fogs, moaning winds… any poor old woman might be looked at askance; once upon a time, after all, she would have been branded as a witch and local legends and tales were still abroad and some extravagant folklore still half-believed in.” – Woman In Black

As Halloween draws near who doesn’t enjoy a Gothic horror story with ghosts, curses and mysteries to unravel?  Stephen Mallatratt’s stage adaptation of Susan Hill’s novel,  ‘Woman in Black,” is the perfect fit.  The current production is presented by Desert Theatre Works at the Indio Performing Arts Center, in Indio. 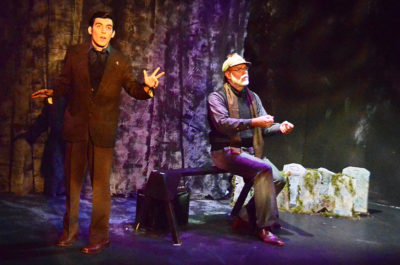 Woman in Black, is a play within a play, which is sometimes challenging to track.  An actor breaking the fourth wall and talking to an audience that isn’t really there because it’s not the audience that’s present to whom he is addressing his comments.  And in tracking a nonlinear storyline within the boundaries of a play within a play can add an additional layer of challenge.  Such was the case with this show.  And I admit that the first 10-15 minutes had me furrowing my brow and wondering what this show was about?   But like many stories that sometimes get off to a slow start, if you can hang in there and give it a chance, the payoff is great.

The Woman in Black, is a two person play that tells the story of Arthur Kipps, (Michael Pacas) a junior Attorney, who is tasked with organizing the papers of a deceased client, Mrs. Alice Drablow.  Kipps is assisted in his story telling by an actor, (Adam Genesta)  who Kipps has hired to help him stage the drama. At the funeral, Mr. Kipps, sees a young woman with a wasted face, dressed all in black, standing in the churchyard. The villagers all refuse to speak of the Woman in Black or reveal anything about the secluded life Mrs. Drablow led.  But after spending time in the haunted Victorian mansion of the deceased woman, he uncovers a box of letters that reveals her secret and tells the sad and haunting tale of the Woman in Black.  He discovers that there is a tragic cost for anyone who learns this buried secret, but at this point, it’s too late.

Daniela Ryan’s direction was absolutely phenomenal.  Her staging skill elevated this production to a professional level. It has been a while since I’ve seen a show where I found the stage direction as captivating as the story itself.  I loved Phil Murphy’s lighting. It was unique and spectacular.  The shadowing and dimension brought even greater depth to this presentation. 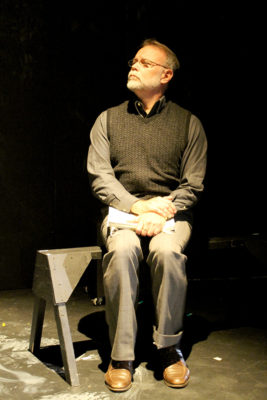 While I am not normally a huge fan of black box set design and imagining that a chair is a car, it absolutely worked with this production.  Miguel Arballo’s sound design provided just enough nuance to turn Mo Stein’s, simple black box set from a baron stage, to a horse and carriage traveling across the marsh towards an old Victorian house, shadows behind a scrim that gave glimpses of secrets long buried and fog creeping towards a cemetery.  The combination of the direction, set, sound and lights took me back to Victorian era England.

“Woman in Black,” can be seen through October 29th at The Indio Performing Arts Center, located at 45175 Fargo Street, Indio, CA.  If you are looking for a fun night out during this Halloween season, this is the show to see.