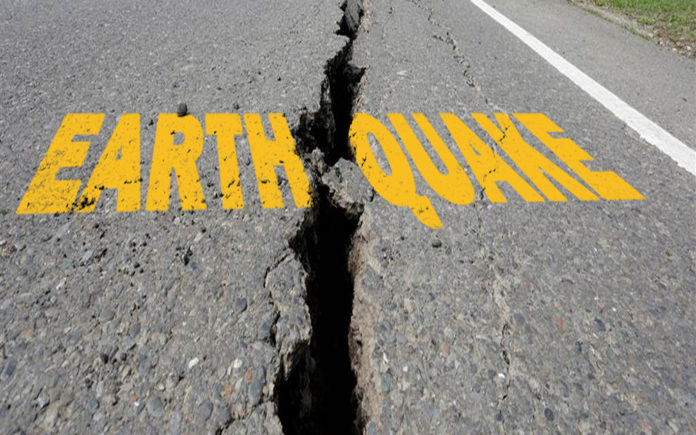 Ghosts and goblins, mummies and monsters, devils and demons may be scary, but what’s truly frightening is a catastrophic earthquake.  And, even more terrifying, is not being prepared.

The mighty San Andres Fault runs the length of the Coachella Valley with many other active faults traversing the area that pose additional threats.  Scientists warn that a devastating earthquake is long overdue and, in fact, may be imminent.

Last week, over ten million people across the state participated in the “Great California ShakeOut,” an annual event designed to prepare for survival and recovery from major earthquakes.

Schools, businesses and communities throughout the nation participated on the same day — at the same time — to simulate a destructive earthquake.  Worldwide, over 56 million joined in to be prepared for predicted significant disasters.

The “Great ShakeOut Earthquake Drill” is held annually on the third Thursday in October with a set time to match the numerical date.  This year’s event was on October 19, and the simulation began in the morning at precisely 10:19.

The Annenberg Retreat at Sunnylands participated with a program that included a lecture, drill scenarios and displays from local organizations.

The lecture was held at the Rancho Mirage Library Monday.  “Prepare for an Earthquake Like an Expert” featured Dennis S. Mileti, Ph.D. a professor emeritus at the University of Colorado, Boulder.

Mileti has authored over 100 publications and his widely read paper “Disasters by Design” addresses the need for sustainable hazard mitigation, which has helped shape and lead government policy.

With everything Mileti knows about earthquakes and natural disasters, he still chose to retire here in the CV, a high hazard area.  He has lived in Rancho Mirage since 1999 and began preparing for the “big one” when he moved in.

A video of Mileti in his nicely appointed home showed on the library’s big screen.  In it he gives a tour pointing out the things he has done to be ready.  Personable and charming, Mileti shared what his earthquake preparedness “lifestyle” looks like.

Mileti opened his pantry to reveal canned food and other nonperishables. He talked about the equipment he has purchased, some of which includes a tent, portable evaporator cooler and solar generator.  He was delighted to share his comfort items, a cocktail shaker and icemaker.  With congeniality and good humor, Mileti made preparations seems doable and almost fun.

Mileti stressed that plans need to be customized to your home and surroundings, such as the characteristics of your home, its propensity for shaking, the soil type it’s built on, its proximity to faults, and the unique personal characteristics of those who occupy the home — including pets.  For example, age needs to be considered.  An older individual has more specific requirements than a teenager.

Generating laughter from the full audience, Mileti remarked how he was not willing to give up his treasured household knickknacks.  But, because they are potential hazards and even life threatening, the bric-a-bracs need to be secured.   He demonstrated how anything in his home that could be dangerous or deadly during a quake, was secured to walls or the floor.

According to Mileti, plans should be “condition based.”   Meaning, after the quake there are specifics to consider, such as fire.  Plus, we need to account for living in a desert environment with either high or low temperatures, severe wind and torrential rain.

Part of Mileti’s charm is that he has so thoroughly considered his needs and spent so much time formulating his survival and recovery plans in such detail, that he is at ease discussing anything and everything about dealing with a cataclysmic earthquake.

Mileti intends to make his life as comfortable as possible after the catastrophic event.  He has assembled amenities that will make his life more palatable when the quake occurs.  His jovial demeanor and matter-of-fact attitude presented a welcome sense of calm that comes with being well prepared.

Mileti is mindful everyday of being earthquake ready.  He recommends being topic specific when drafting plans.

Supplies and Equipment Plan — food, medicine, cushions, etc.; Event Actions Plan — what to do when the earth starts shaking and when it stops; Damages and Injuries Reduction Plan — what to do in the house to keep from being injured or dying in the quake; Lifestyle Recovery Plan -– how and where you live if your home is inaccessible; Financial Plan – costs affiliated with recovery, repairs and rebuilding.

After the video, Mileti stepped to the podium and answered questions about earthquake insurance (get what you can afford), swimming pools (don’t count on them for water), and what to do during a 3:00am quake (stay in bed, roll onto your stomach and cover your head).

For the “big one,” Mileti explained that the shaking would last 90 seconds! In comparison, the devastation and widespread damage from the Northridge quake was only seven seconds of shaking.

According to Mileti, the State of California continues to work on being well prepared and Cal Trans is ready to get damaged highways reopened.  He added that the Palm Springs Airport will not sustain major damage to runways allowing for supply drops.  However, Mileti pointed out that getting to the supplies will be a challenge due to road damage and devastation.

Mileti advises securing 10 to 14-days of supplies.  Help, he said, will not be coming to your door.  Mileti said it’s like packing your car and taking a two-week vacation in the desert.

Mileti also encouraged working with neighbors, and trusts that there will be acts of kindness and “magnificent generosity.”

Sunnylands provided a worksheet corresponding with Mileti’s plans along with website resources to help community members get prepared.

Michaeleen Gallagher, Director of Education & Environmental Programs for Sunnylands coordinated the ShakeOut event.  Gallagher asked the audience to participate in an email survey to be sent at six and 12 months so they can evaluate how well people are planning, and to better understand why people fail to make plans.

At 10:19am on October 19, Sunnylands visitor center evacuated the beautiful, modern, glass building, and school children suddenly “dropped, ducked and covered” on the lush, manicured lawn.

Karen Perez, Jasmine Olivas and Joshua Roderiguez are part of the school’s Health Careers Academy and felt confident that in an earthquake situation they could make a difference.  The students agreed that it is important to have first aid skills and helpful to know some basic medical vocabulary in an emergency situation.

Xavier Prep sophomore, Makai Quintana, and Shadow Hills junior, Yenel Henriquez displayed a homemade solar water distiller that can supply drinking water from muck and sludge!  The students were surprised by how effective the simple frame and glass structure worked.

The project stimulated ideas and an awareness.  With easily accessible materials, little projects can be created that will make a difference in emergency situations.

The Animal Samaritans participated with information and materials to remind people to have emergency supplies for their beloved pets.  The organization provided stickers to place in a window to inform first responders of how many and what kinds of pets belong at the location.

Coachella Valley Water District was present to explain water resources and encouraged having a stored water supply on hand.  The water agency suggests turning off the water supply to your home until specific instruction are released about water safety.

The City of Rancho Mirage is actively engaged in getting better prepared.  The Community Emergency Response Team (CERT) has regular meetings and programs to educate and train volunteers and community members in basic disaster response skills.  Other valley cities have CERT programs as well and Mileti encourages participation.

The more you know, the better you can prepare and be ready to survive and recover.

Recently in this country, and around the globe, there have been horrific, catastrophic, apocalyptic size disasters where people and their communities remain incapacitated.

According to many experts, our valley may be next.