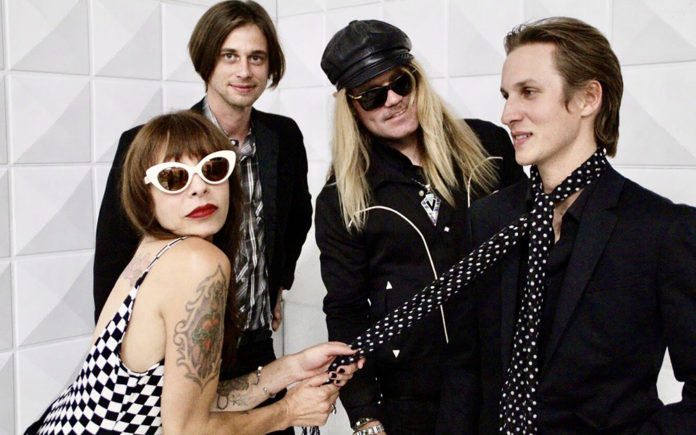 Starlight Cleaning Co. will be purifying your ears on Thursday, February 28th at Pappy and Harriet’s opening for Pearl and The Canyon Revelry Band and Sacred Cowboys. Starlight Cleaning Co. is Rachel Dean on lead vocals, Tim Gray on lead vocals and guitar, Dan Sandvick on bass and Sal Romano on drums. For the Pappy’s show, Rachel and Tim will be performing as a duo. Tickets are $10. Doors at 7 p.m. and show starts at 8 p.m. This is an ALL AGES event. You can purchase tickets at pappyandharriets.com. Coachella Valley Weekly interviewed sparkling sweethearts Rachel and Tim for the first time.

CVW: You’ve both performed at Pappy and Harriet’s numerous times before as a band and in other projects. In your opinion, what is it about the enchantment brought on by the venue?

Rachel: “I first started coming out to the desert in 2006. The first time was to see a friend’s band play. At the time, I wanted to move out of L.A. and was thinking about Portland. That all came to a screeching halt when I visited Pappy and Harriet’s. I had never experienced anything like it before and started coming out on a weekly basis until finally moving in 2007. It was all because of Pappy’s. The people I met there, the music, Robyn Celia and Linda Krantz, all of it. The energy that the venue breeds is not like any other. It is really, the main reason I moved out here.”

Tim: “My first time visiting Pappy and Harriet’s was in the winter of 2009. I was playing guitar in another band that had a show opening for Rachel’s band. We arrived at night, there was snow on the ground and the stars were incredible. Oddly, I never met Rachel that night, but there is something to be said about the way paths are interwoven and seem to intersect at places like Pappy and Harriet’s. In the dark and under the stars.”

CVW: You’ve toured the country extensively. How do you think the rest of the country views this area and our music scene?

Tim: “I think the rest of the country thinks of the whole of California as ‘Los Angeles’ and I think a lot of people overlook the fact that it is so massive and has uniquely different settings, scenes and sounds.”

Rachel: “I think that the people that are aware of Joshua Tree also seem to be aware of the music that surrounds it, or at least, is associated with it, like Gram Parsons, etc.”

CVW: How much does the desert influence your lifestyle and music?

Rachel: “Well, for me it’s about peace and being able to make noise. In the city, I felt like I was always holding back physically and psychologically. It can be stifling. Living in the desert affords you different freedoms.”

Tim: “The desert influences our lifestyles in that it requires us to be creative in what we do and how we make a living. Obviously the vacation rental influx creates a lot of easy pickup work when we need it and although the cost of owning a home keeps going up, the cost of living is significantly less than city living, which allows more time to write and create music.”

CVW: Is there a back-story behind the name “Starlight Cleaning Co.”?

Rachel: “There is actually. A few years ago, an old employer wanted us to move to New Orleans to work on a project there. I was really hesitant as I wanted to stay in the desert. I had never lived outside of Southern California. We moved and turned our home into a vacation rental, something I swore I would never do. We didn’t last long, 7 months, before we came back home. On the drive home, we were trying to figure out what the hell we were doing next. We thought, ‘well, there are so many vacation rentals now in the desert, let’s start a cleaning company’. We wanted to hire a full staff, but were having issues finding the right people. We came up with the name Starlight Cleaning Co. and we loved the name so much we said that if the cleaning company doesn’t work, we should totally use it as our band name. We eventually gave up on the idea of our cleaning empire and used the name as our band name.”

Rachel: “Actually yes! We are so excited! With the help of musician/producers, Bart Davenport and Joel Jerome, we decided to make a record! They brought the studio to us here in the desert. (Last year, Oakland band, Vetiver and producer Thom Monahan, stayed at our house and made a record, which totally inspired us!) So, we hunkered down for five days and recorded ten songs. The record is currently being mixed and mastered. We’re hoping for a late summer (maybe even sooner) release.”

Tim: “It was an exciting process and the speed at which we recorded made for an interesting ‘capture the moment’ sort of a record.”

CVW: What artists do you admire in the Coachella Valley/High Desert?

Rachel: “We absolutely LOVE Victoria Williams, Carol Ann Crandall and Bobby Furgo. They were some of the first people I met here and then had the honor of playing with them for years in the Sunday Band at Pappy and Harriet’s. They inspired me and honestly, helped me grow as a musician.”

CVW: You’re performing an acoustic set at Pappy and Harriet’s on 2/28. What should we expect?

Rachel: “Tim and I have played as an acoustic duo a lot. We have had a couple acoustic tours with Tommy Stinson of The Replacements, which are so much fun. Our set is mostly the same songs we play as a band, but altered slightly to be played acoustically. (When we say acoustic, we mean just voices and guitars, but we still plug in and keep the energy up).”

CVW: You’re performing at Furst World on 3/9. Have you been there before and have you met Bobby Furst? What should we expect from you for that show?

Rachel: “Yes! It’s been years since I’ve been there. It’s such an incredible space and Bobby Furst is so cool. We can’t wait to play there. This one will be a full band show!”

Tim: “It will be my first time being there, actually. Always excited to play new spots in the High Desert!”

Rachel: “Thank you! We hope you can make it one of these shows!”

As for their sound, their song, “Something Kills (In The Way You Love),” is no “Islands In The Stream” duo. The lyrics are straightforward, “Well, I guess it’s all a joke to you,” and the sound is nostalgic-contemporary with an almanac of 60’s and 70’s punk. If you miss their Pappy’s show, the full band will be performing at Furstworld on Saturday March 9, 2019.