Steve Moakler, a dreamer among an ocean of Nashville dreamers, rose among his peers with a song that brings him to this year’s 2017 Stagecoach and so much more.  That song was “Riser,” chosen by Dierks Bentley as a single and the title song to a Grammy nominated album. With renewed vigor following ten long years of odd jobs and a thousand songs, Steve Moakler presents his fourth album, Steel Town, where he retraces the roots of his upbringing, and finds a common chord that is finding its own success.   Moakler has found himself on several “Artist to Watch” lists such as: CMT, Huffington Post, Rolling Stone Country, Taste Of Country, TIDAL was featured on the “Spotlight On Country 2016” playlist on Spotify® and the New Artist Spotlight in Country on iTunes®. His career as a songwriter has seen releases by artists like Ashley Monroe, Jake Owen, Kelli Pickler, Ben Rector. 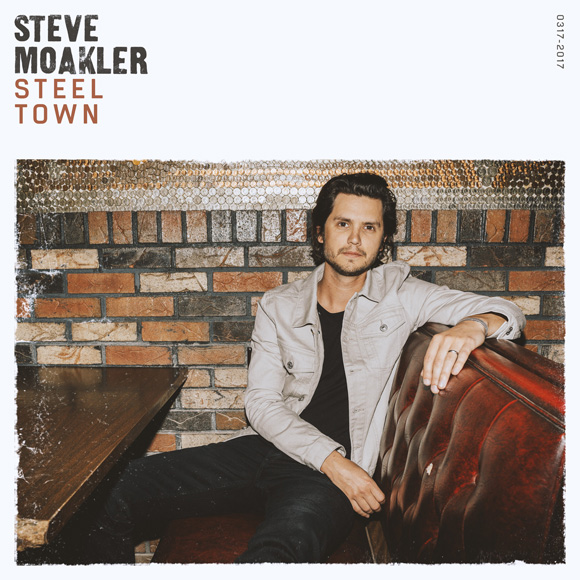 While it may be his fourth album, in a lot of ways, it is a first for the Pittsburgh native. “It’s the first time I’m ever going back and talking about the earlier chapters of my life and where I’m from,”Moakler shares. “My Dad worked from home while I was growing up. He had an office in our basement and would listen to music all day – Bruce Springsteen, The Eagles, Bob Seger, Elton John, Billy Joel…all those great 70s troubadours. Sitting down there listening to all that stuff was probably my earliest inspiration.”

“I decided that I wanted to pursue music when I was about 17.  When I graduated high school, I knew I’d have to leave Pittsburgh to have a career. I never felt the pull to New York or LA, but Nashville had a strong appeal to me. It wasn’t until I got there, that I really understood why. I felt at home instantly among so many songwriters and dreamers. I have been in a constant state of humility and inspiration since I got here. Jeff Skaggs is my publisher; he discovered me playing in a hotel lobby back in 2009. He signed me to my first publishing deal and introduced me to some of the best writers and artists in town.”

Moakler is open about how the years of hard work challenged his inspiration.  “I got to a point where it just didn’t excite me anymore. My artist career wasn’t exactly ‘rocking,’ and I wasn’t sure where my sound fit in. I also fell in love with a girl and asked her to marry me. I was more excited about starting a life with her and getting back my first love, which was writing songs. So that’s what I did. But when I took that pressure off, the writing started coming naturally, and I felt like I found a new sound that was my own. The juice just came back! Hard to explain… felt like once I stopped trying to force it, the inspiration snuck up on me.”

“I got an email about my song, ‘Riser,’” recalls Moakler. I had to rub my eyes a few times to make sure I was reading it right! What really blew me away was when he announced the name of his then, next album; it was called Riser. That video he released to promote the album just about brought me to tears. It was so cool.”

When I asked him if he had any words of wisdom for young artists dreaming the dream and working up the courage to join the legions of incredibly talented music makers in Music City, his response was one that could apply to anyone anywhere: “When you arrive here, you will be blown away by the talent around you. You can either be discouraged or inspired by others’ talent. That’s a choice that you’ll have to make every day. Choose to be inspired; it will make you better and happier.”

Steve Moakler is set to hit the Mane stage 2:35-3:15 pm this Saturday, April 29th. You can follow his music at stevemoakler.com.