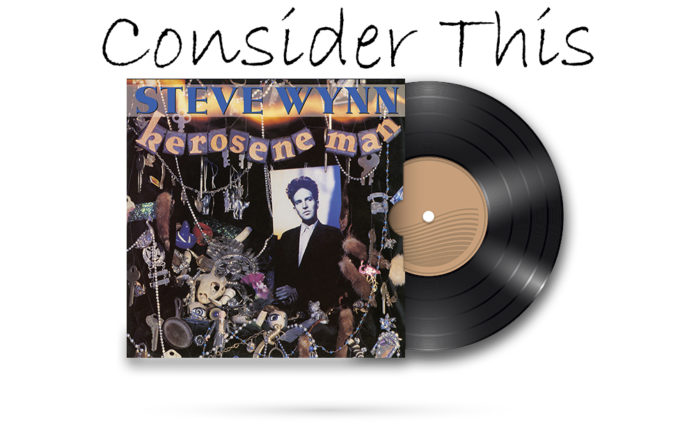 Steve Wynn is probably best known as the sonic architect and front man for the Dream Syndicate. What sometimes gets lost in the shuffle, is the fact that he’s maintained a successful solo career for nearly 30 years.

A native of Los Angeles, Steve began playing guitar at age nine, but his musical ambitions really took shape while he was studying English Literature at UC Davis. It was there he played in a New Wave band called the Suspects, and formed a fast friendship with the band’s lead singer, Kendra Smith.

When the pair returned to L.A. for post-graduate studies, they connected with drummer Dennis Duck and guitarist Karl Precoda, while attending UCLA. The quartet bonded over a shared obsession with the Velvet Underground and Neil Young. They named their nascent combo the Dream Syndicate as a sideways homage to an early ‘60s Avant Garde Collective that included Velvet Underground founder John Cale.

In 1981, the sunny metropolis was in the midst of a musical rebirth. Cocaine Cowboys like the Eagles and sensitive singer-songwriters like Jackson Browne had retreated behind their mansion gates to further deviate their septums and quietly cry in their duvets. Although Punk Rock had been birthed in the bowels of New York, it flourished in the smoggy sprawl of L.A. Bands like X, the Blasters, Los Lobos and the Gun Club stretched the perimeters of Punk, incorporating Country, Jazz, Rockabilly, Rhythm & Blues and (gasp) traditional Mexican styles.

Dream Syndicate, along with the Bangles, Rain Parade, and the Three O’Clock, salted traces of ‘60s Psychedelia into the mix. They signed with Slash Records and the original line-up released a brilliant debut, The Days Of Wine Roses, in 1982. Produced by Chris D., the record blended squally shards of guitar with gritty, erudite lyrics. They weren’t afraid to venerate deadpan heroes like Television, Lou Reed and Crazy Horse. In turn the band ended up inspiring the next wave of influential bands like Pixies, Nirvana and American Music Club.

From the opening notes of his solo debut, it becomes clear that Steve Wynn has more colors in his sonic paint box than just paisley. “Tears Won’t Help” begins tentatively, as chiming, 12-string acoustic guitar wraps around a wash of organ, lowing Cello and an insistent kick-drum beat. Over reverb-drenched riffs the lyrics chastise a friend “so in love with your own pain you stay inside and pray for rain, where losers always win the game, you fall in love with your own shame.”

Cut loose from the confines of the Dream Syndicate allowed Steve to explore uncharted musical territory. The album’s first single, “Carolyn,” is jangly and propulsive, powered by ringing acoustic guitar, sparkly mandolin, sawing fiddle and a lush string section. Eager to woo ol’ Carolyn away from a wayward boyfriend, the lyrics extol Steve’s dubious virtues; “Well, I ain’t no knight in shining armor coming to rescue you, I’m lazy, I’m crazy and I think you know I get mean when I have a few/But I’m not the kind to Peck at you like a hen, C’mon baby take a walk with me now and start all over again.”

“Here On Earth As Well” is tender and prickly in ¾ time. Whoozy and sing-song, the instrumentation includes acoustic, 12-string and bell guitar, along with moody bass lines, lilting organ, piano and brushed percussion. Spartan lyrics advocate redemption through music; “I was lost in confusion, down on my luck for a spell, I found truth in a song I heard here on earth as well.”

“Killing Time” is a Countrified charmer propelled by a thwoking back-beat, spooky organ and stinging electric guitar. Brisk and matter-of-fact, the lyrics dissect a dying romance with this trenchant couplet; “We start out loving and end up lying, you say you’re killing me, we’re just killing time.”

Three tracks play out like musical Film Noir. “The Blue Drifter” blends lithe bass lines, etched Wurlitzer notes and a sturdy rhythm. Steve’s pensive vocals intertwine with supple baritone sax notes as he unspools the lonely yarn of a bus ride companion who “had a woman and a family, (but) he got restless, now he just don’t care.” The lyrics are perspicacious enough to suggest he might be looking in a mirror. A haunting saxophone solo swirls and eddies on the instrumental coda.

“Under The Weather” splits the difference between a Louche Cha-Cha-Cha and a slinky Bolero. Lyrics hint of romantic Ennui; “Another cigarette, another sleazy escapade,” play out between the lines.

Finally, “Younger” unravels like a Beatnik fever-dream. Crackling percussion lays a foundation for an apocalypto arrangement that includes a wall of fuzzy and phased guitars, blustery saxophones, layered keys and a keening violin. Carnival Barker vocals yelp and decry, spitting out non-sequiturs like “Why is youth wasted on the rude and uncouth, blinded on cheap vermouth/A would-be poet in Duluth, short on time long in the tooth, fantasies of John Wilkes Booth, come back when you’re younger.” It’s like Bob Dylan filtered through the hard-boiled prose of William S. Burroughs and Raymond Chandler.

Other interesting tracks the stinging kiss-off of “Something To Remember Me By” and “Conspiracy Of The Heart.” The latter is a duet between Steve Wynn and Concrete Blonde leader Johnette Napolitano. A “Rashomon” like take on love gone wrong, the pair trade verses and unite on the chorus of this soulful lament. The record closes with the whispery grace of “Anthem.”

The “Dazzling Display” album announces its ambitious scope with the opening track, “Drag.” The arrangement simply crackles with authority. Stinging guitar licks connect with propulsive percussion, dissonant piano notes and a knockabout horn section. Steve’s caffeinated vocals are matched by modal sitar riffs. Cryptic lyrics like “Staring down the shadows of love with lust and envy and greed…” hint at an all-consuming passion.

While Dream Syndicate pledged it’s allegiance to the dark, twisty Proto-Punk of the Velvet Underground and the Skronky density of Neil Young and Crazy Horse, this album explores sunnier ‘60s sounds over four tracks without ever sacrificing it’s edge. The effervescent “Tuesday” is impossible to resist. A Baroque charmer accented by  a whip-crack Rhythm, rubbery bass, jangly guitar, ornate strings, smoky harmonica and honeyed harmonies. Clever lyrics attempt to postpone the inevitable duties and obligations of Tuesday.

The candy-coated Psychedelia of “Grace” offers a vivid portrait of a flinty femme fatale that was inspired by Charlotte Rampling’s character in the Woody Allen film “Stardust Memories.” The arrangement accelerates and then downshifts on a dime, concluding with a feedback-y crescendo.

The infectious melody and instrumentation of “Close Your Eyes” belies matter-of-fact lyrics that signal the end of a contentious romance. Deadly serious lyrics like “Words turn to anger, anger comes to blows/Nobody feels the hit but everybody knows,” are undercut by chromatic keys, ringing guitars and a loose-limbed rhythm.

The loping groove of “When She Comes Around” weds pummeling percussion, roiling bass, cello, violin, rippling electric guitar and plangent slide guitar. Here, lyrics sketch out the grim scenario of a self-possessed woman who offers absolution for the physical abuse she endures; “No excuses for fresh bruises, some boys don’t understand/She’s so selective from her perspective, she knows how hard it is to be a man.”

The action slows on a couple of tracks. “As It Should Be” features, stentorian guitar, organ, accordion and piquant mandolin. Desolate lyrics limn the quiet desperation that accompanies a fresh break-up; “The phone never rings, the night never ends/The path to my doorway won’t be darkened again.”

“405” is named for the interstate freeway that runs from the San Fernando Valley to Huntington Beach. Churning, guitars splinter and shudder, cresting over a chunky back-beat. Steve spits out pithy couplets extoling the automotive aesthetics of a “Shiny slant six with a twin-fin jive, blowing back smoke on the 405.”

Two tracks, “Halo” and “A Dazzling Display” are surprisingly topical. The former blends slack-key style guitar with a clickity-clack rhythm, bee-stung acoustic guitar and gypsy violin. The lyrics depict the fall of Romanian dictator Nicolae Ceausescu. The latter is a brutal indictment of the first Gulf War powered by buzzy Guitars, cascading mandolin notes and a thundering beat.

Other interesting tracks include a fairly faithful version of Serge Gainsbourg’s “Bonnie And Clyde” and the carnival kaleidoscope of “Dandy In Disguise.” The album closes with the old timey Music Hall Gospel of “Light Of Hope.”

Of course, Omnivore adds some groovy bonus tracks, six from each record. Kerosene… includes live versions of Steve Wynn originals like “Younger,” “Something To Remember Me By,” “Tell Me When It’s Over” and “Burn.” Plus caustic interpretations of Creedence Clearwater Revival’s “Graveyard Train” and Bob Dylan’s “The Groom’s Still Waiting At The Alter.” For Dazzling… he radically re-interprets Lou Reed’s “Crazy Feeling,” Sonic Youth’s “Kool Thing,” Paul Simon’s “Boy In The Bubble” and another Dylan classic, “Watching The River Flow.” There are also live takes of “Conspiracy Of The Heart” and “The Long Goodbye.”

Plenty of well-known musicians pitched in on both albums: bassists like Mark Walton (Dream Syndicate) and Fernado Saunders (Lou Reed); guitarists Robert Mache (the Mumps), Robert Lloyd (Television) and Howe Gelb (Giant Sand); X drummer D.J. Bonebrake, multi-instrumentalists  R.E.M.’s Peter Buck and Chris Cacavas from Green-On-Red. Backing vocals were handled by the youngest member of the Cowsills, Susan, Vicki Peterson of the Bangles and the inimitable Flo & Eddie from the Turtles. Both records were produced by Joe Chiccarelli.

Steve Wynn can currently be found out on the road with the reconstituted Dream Syndicate, promoting their excellent 2017 album, “How Did I Find Myself Here.” Revisiting these records offers the listener more than a nostalgic trip down memory lane. To paraphrase James Joyce, Kerosene Man” offers an intimate snapshot of the artist as a young man. Meanwhile, Dazzling Display adds more color and texture, and the results are sweeping and cinematic. Each album remains timeless and classic.