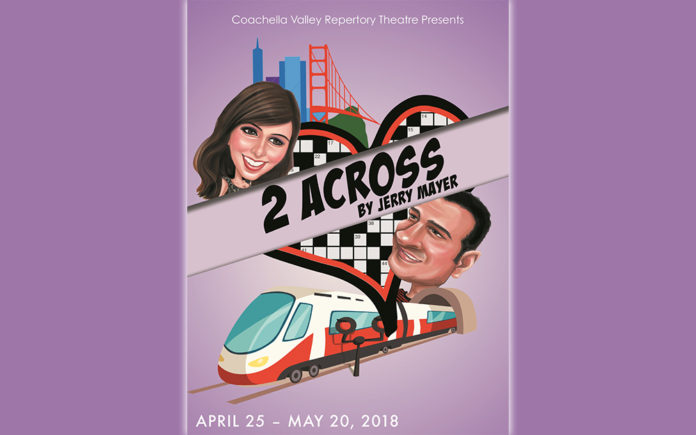 The first known published crossword puzzle was created by a journalist named Arthur Wynne.  He published his new and fascinating word game on December 21, 1913 in a Sunday newspaper, the New York World.  On Sunday, February 15, 1942, shortly after the bombing of Pearl Harbor, the New York Times began their printing of what has become know as the most prestigious of Crossword puzzles.

“Crosswords are a metaphor for life, those who finish, succeed, those who don’t, fail.”

Jerry Mayer’s, ‘2 Across,’ currently in production at the Coachella Valley Repertory in Rancho Mirage, is a romantic comedy that tickles the funny bone and pulls on the heartstrings. Mayer brings to this script, the skills from his long and distinguished career of writing for television as well as for the stage.’

‘2 Across,’ proves that love can be found in the strangest of places, even at 4:30am on a San Francisco BART train.  Josh, (Joel Bryant) and Janet (Andrea Gwynnel) are two strangers who meet on an empty train car in the early morning hours.  Bryant and Gwynnel have wonderful chemistry. Both actors displayed flawed characters with honesty and vulnerability.   Yin and yang, two halves of a whole, each searching for a balance in their lives, never realizing that a pre-dawn train ride would humorously lead them to an unexpected destination.

Their mutual interest in the New York Times Crossword puzzle reflects both their vast differences and their mutual interests. Their initial revelation that they are both married makes the blossoming of a forbidden attraction all the more exciting and hilarious.  Janet is a by the book psychologist, who always finishes what she starts. Josh an unemployed runaway from his father’s business, who quits everything and proves that you can’t always judge a book by its cover.  With absolutely nothing in common, these two learn how to work together in order to finish the daunting New York Times crossword puzzle and reveal the missing pieces in their own lives.

Veteran Director Deborah Harmon, who previously directed the world premier of ‘2 Across’ at the Santa Monica Playhouse, brings a high level of talent and experience to this very funny production.  Her skilled blocking gives this single scene show a steady flow of movement and energy. While the sparks are flying between Josh and Janet, their well-choreographed movements appear to be a mating dance,  greatly contributing to the anticipation of the unfolding romance.

Jimmy Cuomo is a rock star when it comes to sets.  His design was beautifully detailed. I found myself boarding that train the moment it left the station. Moira Wilkie Whitaker’s lighting was inspirational.  The shifting window light depicted the movement of the train in such a subtle yet abundantly effective way.

If you are looking for a fun night of theatre, a romantic date or hanging out with friends, ‘2 Across,’ is an excellent choice.  CV Rep has a reputation for quality theatre and this production does not disappoint.