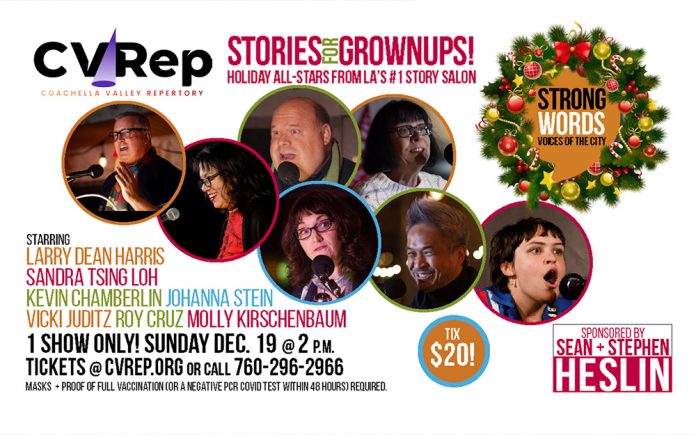 Once upon a time, back in 2011, three writers met at the Body Builders Gym in the Silver Lake area of Los Angeles. It was a very fortunate meeting because the daughters of Greek Gods Zeus and Mnemosyne, known as the Muses, who preside over the arts and sciences, also happened to be visiting this Silver Lake location. Zeus, threw a thunder bolt and great inspiration was granted by the Muses. These writers came together, called upon other writers, performers, musicians and artists and created, “STRONG WORDS, Voices of the City.”  Strong Words, is self-described as a community of artists and aficionados who congregate for the world’s second oldest form of entertainment: the story.

Novelist Margaret Atwood once said; “You’re never going to kill storytelling because it’s built into the human plan. We come with it.”  And no group epitomizes this revelation better than Strong Words, crafting monologues that tell stories about families and traditions, singing original songs, giving insight to the human condition through laughter and poignancy. This group of talented artists will remind you of the Bards of old, the poets, singers and storytellers who traveled from town to town reciting epic tales in an oral tradition.

Strong Words, produces a monthly show at its outdoor courtyard venue located at 3621 Brunswick Ave. in the Atwater Village, area of Los Angeles, but on December 19th, Coachella Valley Repertory presented a magical holiday themed performance of this LA based troupe, Stories for Grownups!  An afternoon of performance art and storytelling.

Stories included a nativity pageant where costumes became the highlight of the show, the story of a non-traditional Jewish hippy family that is “one toke over the line,” and a day in the life of a Macy’s store Santa. Who knew being the holly-jolly St. Nick could be so much work?  Original songs that put ‘dreidels’ in a whole new light and memories of poignant family gatherings, are a few of the stories told in this delightful holiday show.

Founder/Artistic Director, Larry Dean Harris, is a playwright and storyteller and is a member of the National Council for the Dramatists Guild of America. Along with author and performer, Sandra Tsing Loh, actor, singer Kevin Chamberlin, actor, musician, writer Molly Kirschenbaum, actress, comedian, writer and spoken-word artist, Vicki Juditz, Emmy-nominated comedian, director, actress and author, Johanna Stein, and actor, visual artist Roy Cruz, this group of multi-talented performers brought Zeus’ daughters to the desert on a beautiful Sunday afternoon and made magic right before our eyes.

For more information on STRONG WORDS Voices of the City – visit their website:  strongwordslive.com