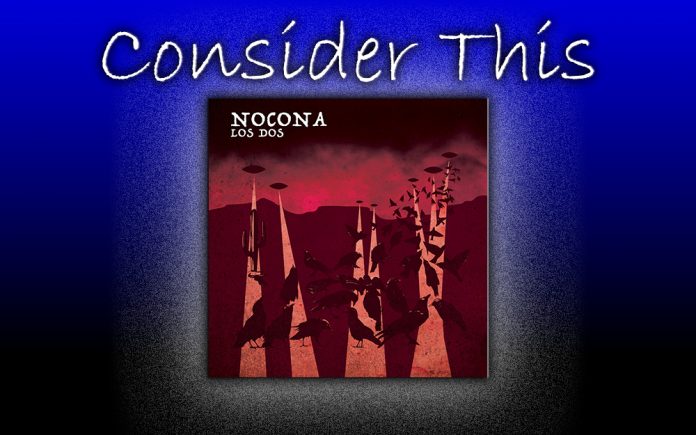 Discovering new music (or music that is new to you), is one of life’s greatest pleasures. I had that experience recently when I attended the 25th edition of Gram Fest (on what would be Gram Parsons’ 75th birthday), with my best pal, Rick Shelley.

Headliners included favorites like Freedy Johnston, Carla Olson, Louise Goffin and High Desert doyenne, Victoria Williams. Leading up to that there was a surfeit of Americana/alt.country bands (which seemed wholly apropos since it’s a genre Gram, along with Rick Nelson and Mike Nesmith (R.I.P.) pioneered in the late ‘60s), mixing their own music with songs associated with Gram. One band stood out from the pack, NOCONA. Four songs into their set, I knew I was in love.

NOCONA has been a going concern since 2013. The nucleus of the band is Chris Isom (lead vocals, lead guitar) and Adrienne Cohen Isom (bass, vocals). A Texas native, Chris was introduced to seminal bands like the Sonics, Can, The Who, The Minutemen and The 13th Floor Elevators, compelling him to pick up the guitar. A turning point in his musical education came when his family relocated to New York City and his dad took him to see Johnny Cash at Radio City Music Hall. By his early teens it was all about underground thrash and Death Metal. He cycled through a series of bands in high school, including Noise Culture who recorded a 7” single that was released in Germany.

Originally from Montreal, Adrienne came of age in Los Angeles, living around the corner from the infamous Sunset Strip. She attended plethora of Punk shows, influenced in equal measure by X and the Grateful Dead, Pretenders, The Clash, Classic Rock, and essential L.A. bands like Love and The Doors. She made her bones in bands with names like Mushmouth. Introduced through a mutual friend, she connected with Chris in college and the rest, as they say, is history.

Although they made music together informally for years, Adrienne’s main gig was in fashion photography, (in fact, she’s currently making a documentary about the world-famous Palomino, arguably the most important Country music venue on the West Coast), while Chris lent his prodigious talents to bands like Grand Mal, The Mooney Suzuki, 20 Miles, Men Without Pants and Moldy Peaches’ Adam Green. After the birth of their first child, the couple relocated from NYC to L.A. and their casual collaboration yielded a tight set of songs. So, they recruited drummer Justin Smith, Elan Glasser on harmonica, Xander Hitzig on fiddle, Dan Winstrom on pedal steel and Carl Byron on keys. They chose their band moniker with care. Not only is Nocona the Texas town where Chris’ family settled in the 1800s, it was also the site of plenty of family reunions that invariably evolved into cousinly jam sessions and included a generator, a p.a., amps and a makeshift stage. Roughly translated, Nocona is a Cherokee term for wanderers, which seemed appropriate. Logo-wise, they wanted a name that featured two “O’s” because that kind of symbolized infinity and looked like eyeballs. Their self-titled debut arrived in 2013, followed two years later by Long Gone Song. Their latest effort is entitled Los Dos.

The record kicks into gear with “Stabby Mike.” Strummy acoustic guitars flank Chris’ lanky tenor, which occupies the same bandwidth as Wilco’s Jeff Tweedy, The Shins’ James Mercer and Sea Wolf’s Alex Brown Church. As the stream-of-conscious opening verse recedes, a walloping big beat, throbbing bass, jangly electric guitar shadowy pedal steel and wheezy keys considerably up the ante. Chris stands his ground insisting “Love is leaving things that you loved behind.” As the arrangement gathers speed on the break, spiky pedal steel succeed a series of spirited “Oh-oh-ohs.” The song winds down with a last bit of Jabberwocky; “You know seeing is believing, any damn thing you’re told to believe, you got your money and the weekend, a little hatred to defend and Stabby Mike wants it/A little bit louder, and just a little more power, no, I can hear you crying underneath the crankcase, and Napoleon’s dumb face…oh, oh, oh.”

Back when Gram Parsons created the sound he dubbed Cosmic American Music, his primary goal was finding a through-line from Honky-Tonk Country to Rock & Roll. Bands that followed, from the Eagles to Uncle Tupelo to Mumford & Sons kind of stuck to that blueprint. But it’s clear NOCONA prefers to color outside the lines. Take “Free Throw,” gutbucket guitars glide atop rippling piano, chunky rhythm riffs, wily bass lines and a chugging beat. Something of a Dixie-Fried charmer, the lyrics offer a wry meditation on life’s vagaries; “One and a million miles to go, as life, it pulls us row by row, while we’re sitting here waiting- on a free throw.” On the break Chris unleashes a scorching guitar solo that’s kinda sorta Skynyrd-riffic.

Then there’s the suitably shambolic “Post Apocalyptic Blues.” Ambient chatter gives way to knotty electric guitars, nimble keys, spidery bass and a ramshackle beat. Sad-sack lyrics are mired in a post break-up malaise; “Well, tie my head to the railroad tracks, I don’t want nothing but you, got my strait-jacket, padded cell, looney tunes post-apocalyptic blues/You can keep my old records and movies too, they just remind me of you, gonna do a little walkin’ and count the runes in some post-apocalyptic blues.” A filigreed guitar solo, partners with dusty pedal steel and jittery piano on the break, revealing a predilection for the Gypsy Jazz of Django Reinhardt. The song crests to a close with a smoky harmonica outro and scattered applause.

Meanwhile, the buoyant arrangement and instrumentation of “Never Come Back,” is juxtaposed by lyrics that offer a misanthropic kiss-off. Chiming guitars are matched by fluttery fiddle, loose-limbed bass, burnished pedal steel and a kick-drum beat. Verses jauntily excoriate an ex; “And your soul’s calloused over, and you’re quite prepared to die, but you’re throwin’ up blood, every time you try, maybe feeling a little run down, maybe life’s telling you gotta be somewhere, gotta be somewhere soon” As the song rounds the bend, sun-dappled guitar and Opry’-fied pedal steel lattice over shivery fiddle, locking into a courtly two-step.

The action slows, (or so it seems), on two tracks, “Chasing Your Shadow” and “Tabernacle Woes.” The former blends braided acoustic guitars with slashing electric licks, brisk fiddle runs and a thumpy beat. Enigmatic lyrics don’t exactly say no to drugs (somewhere Nancy Regan is wagging her finger in disappointment), as much as relive those times “when we were high on coke together,” through a dystopic lens. Rather quickly, the arrangement accelerates, slipping into a psychotropic hoedown, and the lyrics follow suit; “Now you can’t see nothing but banshees and all the hell you’ve been, down the road, looking for redemption, be grateful your pantry’s filled, aliens and crows come by in the morning…”

The best tracks are also the most ambitious. “Chester” careens out of the speakers with locomotive speed, as ricocheting guitar riffs collide with boomeranging bass. The fiddle revs as the pedal steel peels out. Something of a Cornpone-Psychedelic breakdown, the fractious arrangement mirrors ball of confusion lyrics like “What’d you say, I don’t know, but ya know that I can’t hear it, get a little older every day, but ya know that I ain’t dead yet, what’d they say, hey who’s this person yellin’ at me on the TV screen, living up in the L.A. hills, enslaved to the machine.” The velocity rachets on the break as Chris executes a high-octane guitar solo. On the final stretch, the song kicks into interstellar overdrive with an extended instrumental coda.

“Unseen Hand” opens with braided acoustic guitar, swirly electric licks, thready bass, searing pedal steel and a high-hat kick. Following the first verse, time signatures shapeshift, pedal steel and guitar notes intertwine, as the bottom is anchored by shuddery rhythm riffs and some Bluesy harmonica. Chunka-chunka power chords underscore the theory that you can run, but you can’t hide from fate; “There ain’t no use in your hiding, there ain’t no hiding where you stand, and that wave you’ve been riding, it’s gonna come crashin’/No? Yeah? Hey man, you got no place to land, you may think you’re something, everything at your command, that kind of thing just ain’t nothing, you’re just workin’ for the unseen hand.” On the break, synchronized guitars lock into some epic Southern Boogie riff-age that would make the boys of Molly Hatchet blush. Hazy harmonica darts through the ether on the final two verses before the song powers down to a close.

“Old Bones” is powered by chunky guitars, quavery fiddle, willowy pedal steel, back-woods bass lines and a sly shuffle rhythm. Lyrics like “You know the field will be on fire before too long, it don’t matter what planet you might be on, it don’t matter if your mind is gone, and it sure as hell don’t matter what god damn side we’re on/Good ole Cthulhu’s got quite some plans for you, listen close, you might hear a word or two, as the sky turns black instead of blue, and everything you thought were lies, turns out all those things are true,” deftly sideswipes global warming deniers and facile politicians in one fell-swoop. Sugary pedal steel, smoky harmonica, cascading piano notes and shivery fiddle runs are salted in the mix.

Finally, “Too Much To Lose” could sandwich easily between the Brothers Allman and Doobie on any AM radio dial, circa 1975. This souped-up anthem (weirdly) shares some musical DNA with The Stones’ “Dead Flowers” and Echo & The Bunnymen’s “Bring On The Dancing Horses.” Rollicking piano snakes around spidery bass lines, rip-snortin’ guitars and a pummeling backbeat. Much as Bruce Springsteen enticed Mary off that porch and out to Thunder Road, these lyrics persuade a reluctant girl to defy parental expectations “Yeah, your mama don’t want you runnin’ round town with a dreamer none, ya better go get yourself a rock n’ roller, a bona fide son of a gun/Yeah your daddy wants a man with prospects so you can marry a damn millionaire, ya know you can die that slow if ya wanna, or we can get out of here.” Whipsaw guitar riffs connect with splintery piano on the break, perfecting an AOR crunch that proves irresistible.

The record ends on a contemplative note with “Ace In The Hole.” Shimmery acoustic arpeggios wash over high lonesome pedal steel, sturdy bass lines and a drifty ¾ rhythm. Chris and Adrienne’s plaintive harmonies wrap around a melancholy meditation on the vicissitudes of romance; “We’re all in the darkness, bar rowed moon beams and more, stars in the blackness mortgage your soul/Withering madness, the executioner’s blindfold, may bring you sadness, but it’ll take you back home.” The instrumentation expands and contracts over two lengthy breaks, layering in keening fiddle, sparkly electric guitar and incandescent organ colors. Although the odds are stacked against them, they willingly roll the dice, taking one last gamble on love.

NOCONA has distilled their influences into a heady brew that feels fresh and familiar. By fusing rich Country tradition with a healthy dose of Psychedelia, they’ve forged a sound that simply crackles with authority.