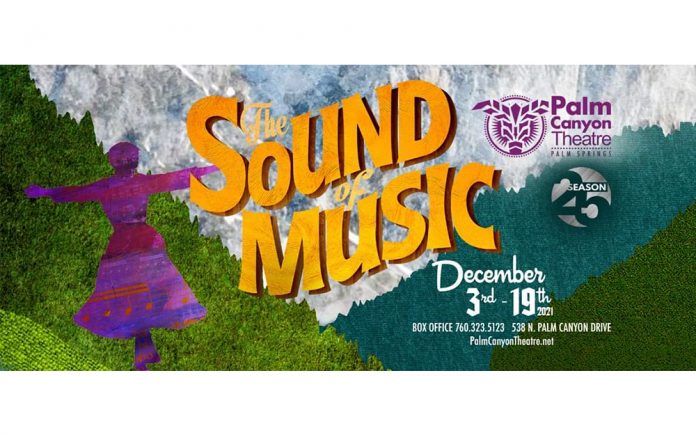 It’s near impossible to think of a classical stage production that has stood the test of time better than, “The Sound of Music.”  And you’d be hard pressed to find a theatre who reproduces Broadway classics better than the Palm Canyon Theatre. If you’re in need of a holiday hug wrapped in timeless music with top tier performances, the Sound of Music, now in production at the Palm Canyon Theatre is the show to see.

Based on the 1949 memoir of Maria Von Trapp, The Sound of Music was written in 1959 with music by Richard Rodgers, lyrics by Oscar Hammerstein and book by Howard Lindsay and Russel Crouse.  Maria’s book, “The Story of the Trapp Family Singers,” was a best seller.  But it was the five-time Tony Award winning musical, (and the later Oscar winning film,) that made the Von Trapp family’s story an international hit. 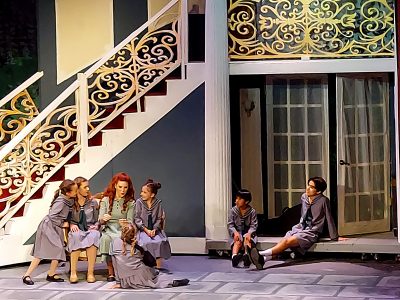 The Sound of Music, is set in Austria, on the eve of the Anschluss, (the annexation of Austria into Nazi Germany in 1938.)  It tells the story of Maria, (Se Layne,) who is on her way to becoming a nun when she takes a job as the governess for a large family. She ends up falling in love with the widowed Captain Von Trapp (Keith Alexander,) and his seven children, Liesl (Jackie Lopez,) Fredrich (AJ Fernandez,) Gretle, (Dayanra Huerta,) Marta, (Reagan Kaminsky) Kurt, (Ryan Rodriguez,) Louisa, (Audrey Steepleton,) and Brigitta (Alice Steepleton, -who did a wonderful job of pushing on with an injured arm).

Captain Von Trapp, is ordered to accept a commission in the German Navy, but due to his serious opposition to the Nazis, he and Maria, decide to flee Austria with the children.   In real life the family left Austria by train and eventually ended up in America, continuing their musical careers as the Von Trapp Family Singers, but the play’s portrayal of the family escaping in the dead of night and hiking over the mountains into Switzerland makes for a much more satisfying and dramatic conclusion.

Though set in a very serious period of time, the inspirational music and uplifting storyline will have you wanting to “Climb every mountain.”  Se Layne, directs and leads in this classic musical and without doubt demonstrates why she is a force to be reckoned with when it comes to quality theatre.  Her vocal and acting range is astounding and just when you think you’ve seen her do it all, she will surprise and delight you. 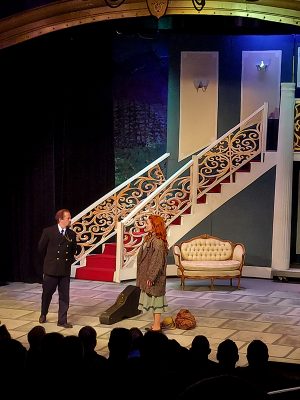 Jaci Davis, as Mother Abbess, is a stand out in this show and blew me out of the water with her voice.   Davis’ singing will capture your attention and remind you why no stage in America is more fortunate than the one she’s on. Virginia Sulick, as the Baroness Elsa Schräeder, Captain Von Trapp’s fiance and Sheldon Safir as Max Detweiler, the family friend and music producer, are both crown jewels in this large cast of talented performers.

Standing Ovation for J.W. Layne’s Scenic and Lighting design.  The set was one gorgeous painting. Combining hard walls with projected images allowed for such a beautiful ease of travel between scenes. Derik Shopinski’s costumes are always a supporting character in any Palm Canyon Theatre production and hats off to David Brooks’ spotlighting skills.

The live orchestra, Scott Smith (piano/musical director,) David Bronson, (drums,) Larry Holloway, (Bass,) and Lee Wolfe, (Violin,) put their talents to full time use in this show with twenty plus musical numbers, as they seamlessly transition from one beautiful melody to the next.

The show is top quality and there is something about this beautiful musical filled with love and hope that makes it the perfect holiday gift to yourself and your family.  Take the time to go, sit back and treat yourself to Palm Canyon Theatre’s outstanding production of, “The Sound of Music.”

The Sound of Music is showing at the Palm Canyon Theatre through December 19th. Don’t miss it! For ticket information please visit www.palmcanyonthatre.org