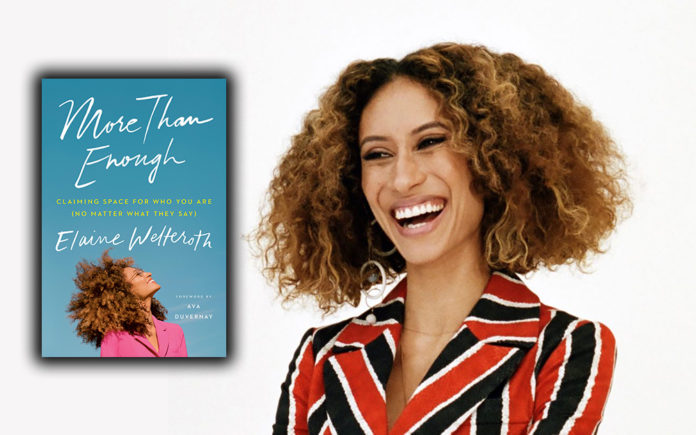 It is not always easy to follow your dreams.  It takes focus, hard work and perseverance.  For those of us who are white, it is difficult to understand how challenging the world can be for men and women of color.  In Elaine Welteroth’s memoir, More Than Enough: Claiming Space for Who You are (No Matter What They Say)(Viking, 320 pages), she shares her wisdom and the joy of discovering your own voice and carving out your own path.

I knew nothing about Elaine Welteroth before I read this book and now I am a huge fan.  Shame on me for not knowing because Welteroth is an award winning journalist; she was the youngest person ever appointed editor-in-chief (Teen Vogue); and in 2012 the first African American ever to hold the post of beauty and health director at the media giant Condé Nast.

But even more impressive was what she was able to accomplish in her tenure as editor-in-chief.  She helped change the conversation and empower young people to step up and be heard.  And, through the “Teen Vogue Summit,” which was her brainchild, she created a forum where the most influential women in our country attended to speak and to listen.

Welteroth was born and raised in Sacramento, California.  Her mother is black and her father is white.  She and her family lived in a suburban neighborhood where she was often the only black person.  Her parents decided to raise their kids as “black” because that was how they would be seen by society.

Ambitious even as a child, Welteroth had a love of magazines and she saw herself as a “boss lady.”  She worked hard to go to college (first in her family) and get the right internships that would move her into the career of her dreams.

Welteroth started at Ebony magazine – at the time it was no longer “sexy” and had lost its popularity.  She went with the underdog to be apart of a team that would bring the black magazine back to the prestige and influence it once had.   She was there when Michele Obama was on the cover before her husband became president.

Driven to create a great magazine experience, Welteroth worked hard to make her mark as a writer and fashion editor, moving all the way to the top – her dream had come true.  And when Condé Nast offered even more, she realized there were other dreams to pursue.

This is an involving story of a young black girl making her way in the world.  She shares her hopes and dreams, and her achievements, which she accomplished basically on her own.  She also shares her personal mistakes (mainly men whom she allowed to change the course of her life.) Welteroth had a loving and supportive family, good friends, and a belief that God had a plan.  But, she persevered driven to do her very best.

Some of the most fascinating moments are when she challenges race issues with her black college friends and colleagues.  She uses these opportunities to confront and inform how we grow to perceive and judge the world based on color.  Even black people are exposed to a white brainwashing culture that informs them on hair and beauty.

Ultimately, Welteroth learns that the more she is her authentic self, the more affective she is.  She is candid and shares her weaknesses with good humor.  She presents her life as a way for others to stay motivated and to work hard to achieve personal goals.  She’s honest, generous and kind with her personal story, but calls out the pain she felt as black boys and men were shot to death without cause or justice being served.  Something we should all be outraged by.

One of my favorite lines – a message her mother gave her before she left home: “When the world tells you to shrink, expand.”  Welteroth’s drive is phenomenal, and  at one point she was working so hard, she was literally withering away.  She was so skinny her doctor was concerned.  So, Welteroth also learns to stop and enjoy life.

Welteroth’s message for young people and anyone seeking to achieve their dreams is to be fearless.  “Do not wait.  Do not wonder if you can.  Do not ask permission…  You are enough.  You were born enough.  The world is waiting on you.”

As a woman of color and feminist, Welteroth is passionate about challenging the status quo and encourages everyone to do her or his best.