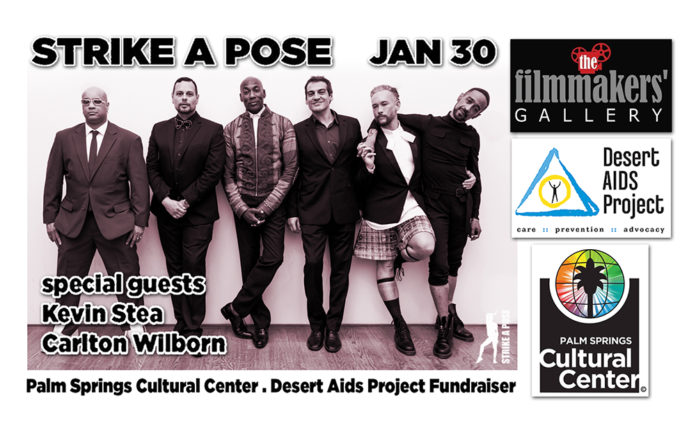 We are all still in the movie phase as the Palm Springs International Film Festival closes.  But film lives on in the Coachella Valley every day of the year.

Paul Belsito and Steven Roche founded The Filmmakers’ Gallery – Palm Springs. This Facebook Group was created to bring together film and television lovers and the creators who make the Hollywood magic happen to one place. “This means anything happening in or around the Palm Springs area is relevant to this Group,” noted Paul. “We want to engage this group of creative people through special events, special appearances & speakers, Q&A’s, tributes, book-signings, fundraisers, film festivals, private screenings and other film and television related happenings.”

In keeping with that The Filmmaker’s Gallery is hosting the documentary Strike A Pose. The screening will be on Tuesday, January 30, starting at 6 pm, at the Camelot Theater, Palm Springs. Following the screening there will be a question and answer period with two of the film’s subjects, Kevin Stea and Carlton Wilborn. George Sinatra of Desert AIDS Project will moderate.

STRIKE A POSE is a Belgian-Dutch documentary film that premiered at the 2016 Berlinale.  Ester Gould and Reijer Zwaan direct the film. It follows several male dancers that performed with Madonna on her Blond Ambition World Tour in 1990. The tour also produced the 1991 documentary Truth or Dare.  That film is famous for many things – Warren Beatty, Antonio Banderas, Madonna’s love for Sean Penn – and the game of Truth or Dare? with Madonna, her dancers and others.

The film also followed seven of male dancers. The dancers for the tour, many of whom were gay, were encouraged by Madonna to be and “express themselves” during the filming. For some viewers the openness of these men was seen as an inspiration to be true to themselves. But for others, specifically, three of the dancers, Oliver Crumes, Kevin Stea, and Gabriel Trupin, that enthusiasm of others was initially not shared by them.  They filed a lawsuit against Madonna alleging invasion of privacy fraud and deceit, intentional misrepresentation, suppression of fact, and intentional infliction of emotional distress for displaying the men’s private lives in the documentary. The parties reached a settlement in 1994.

Strike A Pose picks up the story of these men 25 years after Truth or Dare. What became of these dancers? Did they realize how their words would impact a generation? As Kevin Stea, aka rogue Romeo, noted, “Only now, in the past seven years or so and from social media, have I actually seen the impact this movie had on pop and gay culture. I constantly receive messages from people recalling how this movie — this bigger-than-life glimpse into a world beyond shame-filled communities, closeted lives, and disapproving families — changed their lives.”

With a larger than life personality Carlton Wilborn, the young bare naked dancer that jumped into the Truth or Dare bed, noted “I was acting all grand, but inside I was feeling f**g small.” Today he is the creator of Danceformation, a program, which combines life coaching with the power of dance.