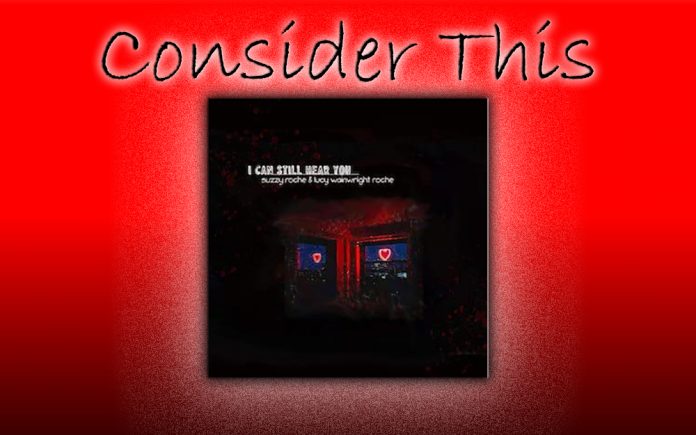 Suzzy and Lucy Roche have a new album out, but it almost didn’t happen. The mother-daughter duo began recording in Nashville when the pandemic hit and most of the country shut down. They were forced to return to their respective homes in Manhattan and Brooklyn. Luckily, they persevered and continued to work with producer Jordan Brooke Hamlin plus a dedicated crew. The result is their third collaboration, I Can Still See You.

If you aren’t familiar with The Roches, the group Suzzy (it still rhymes with fuzzy), started with older sisters, Maggie and Terre. Stop reading this and go check them out on Youtube or spotify or something. (No, take your time, I’ll wait). See? Now buy some of their music.

The trio burst on the scene in the late ‘70s, just as New York City was experiencing a musical renaissance that included Punk, Post-Punk, New Wave, No Wave, Disco and Folk. Between 1979 and 2007 and they released a series of albums that were by turns sweet, sunny, funny, smartass and Folky.

Within the narrow confines of the music industry, their sound was characterized as Folk, but this wasn’t that stripe-y shirt, sincere and humorless Michael rowing the boat ashore Folk. Songs like “We,” “The Death Of Suzzy Roche” and “Face Down At Folk City” displayed a wicked sense of humor.  Meanwhile, tracks like “The Hammond Song,” “This Feminine Position” and “Losing True” revealed a keen and complex  outlook on life. Most importantly, they wrapped each richly nuanced song in their trademark sororal harmonies. Not only did their brand of soulful audio verité had an immediate impact on artists like Linda Ronstadt and Phoebe Snow, they made a lasting impression on younger acts like indigo girls and Haim.

As the daughter of Suzzy and Grammy Award winning singer-songwriter Loudon Wainwright III, Lucy initially resisted joining the family business. She graduated from Oberlin College in 2003 and later received a master’s degree in general education. She worked as a teacher for a few years, but by 2007, she began pursuing music full time.

After she released a couple of EPs, her first long-player, Lucy, appeared in 2010. She has performed with critically acclaimed artists like Dar Williams, Amos Lee and Neko Case, as well as her celebrated half-siblings, Rufus and Martha Wainwright. Lucy has recorded two more solo albums, as well as two collaborations with her mom and an album of lullabies recorded with her half-sister, Martha.

In between the 11 albums she recorded with her sisters, Suzzy has recorded a couple solo albums and two as a duo with Maggie. She has also acted on stage with The Wooster Group and appeared in films like “Soup For One” and “Crossing Delancey.” In the latter, she stole every scene, holding her own against heavy-hitters like Peter Riegert and Amy Irving. She has also written a couple of books, the children’s story “Want To Be In A Band,” and the novel, “Wayward Saints.”

Sadly, her sister Maggie died in 2017, at age 65, after a long battle with breast cancer. Not long after, her mother, Jude, passed away. Suzzy recently confided that she would have quit singing if it wasn’t for Lucy. She has always preferred harmonizing to singing alone. Following their fraught recording experience in Nashville and New York comes Suzzy and Lucy’s third collaboration, I Can Still Hear You.

The album opens tentatively with the title track; braided acoustic guitars partner with plaintive piano, fluttery keys and a thumpy beat. Lucy goes it alone on the first verse, Suzzy chimes in on the second and their vocal blend is beatific. Painterly lyrics recall halcyon summer days and carousel horses, and winding up next to the people you love; “Around and around now, it’s just up and down now, I can still hear you/Between a few wild rides, surrounded on all sides, I can still hear you.”

Suzzy has written the lion’s share of songs here. Three songs offer metaphors and allegories aimed at kids as well as adults. If Nora Ephron had ever collaborated with Dr. Seuss, it might sound something like “Swan Duck Song.” Stinging electric guitars dart and pivot around Suzzy and Lucy’s intertwined vocals, anchored by stately piano and a rock steady beat. The lyrics speaks to the twin tribulations of growing pains and old age. Deep in conversation with an ex-Swan who is now a duck, She offers some wry observations about the changes we face throughout life; “Feathers come and feathers go, there’s one thing you should know, birds of a feather together flow/From now on no swan’ll be your friend, there’ll be plenty of ducks around the bend, but only when you swim the muddy water with your two duck feet, your strange new heart doesn’t recognize it’s beat.”

“Little” is an ode to E.B. White’s iconic mouse, “Stuart Little.” Suzzy and Lucy’s harmonies glide over strummy guitars, shadowy keys and a pulsating beat. The lyrics address the mouse-sized boy from the classic children’s book; “Parents so worried, you’re so strange, took you to the doctor, still no change/It’s looking like you fell in love with a bird, flew out the window, without a change.” Despite the cheerful vocals, the song hones in on the darker aspects of Stuart’s journey, noting “Life ain’t nothing but a tragic surprise.”

Meanwhile, jangly electric riffs lattice over homespun acoustic notes, plangent piano and a subdued rhythm on “Ruins.” The soothing melody and arrangement, even the celestial harmonies can’t camouflage lyrics that sketch out a portrait of a budding Bad Seed; “A boy passed by an apple tree, stopped at the garden bed, flower faces stared at him, purple, black and red/I don’t want to ruin anything, he lifted up his leg and boot and stomped upon the roses, next he took the pansies out, crushed their eyes and his noses.” While cascading harmonies nearly blindside us with beauty, the lyrics ask us to examine our darker impulses.

That theme continues on both “I Think I Am A Soul” and “Joseph D.” “I Think…”matches prickly guitar notes, rubbery bass lines and burnished piano to a shuddery beat. The lyrics mix spirituality and moral ambiguity, but still manage to get some shopping done; “I think I am a soul, the same old soul I’ve always been, the soul I am never felt innocent/The soul I am, you can see right through if you take a peek…never meant to go astray, floating around 14th Street every day/Shopping for tomatoes, stopping at the light, no one even knows me, still I turned out alright.”

“Joseph D.” is a sullen saga of an abusive misanthrope. Over plucked guitars, thrumming bass, warm piano notes and a tip-toe beat, Suzzy and Lucy’s harmonies are feathery and lullaby sweet even as the lyrics decry the wanton cruelties implemented by a man-child who seems to have takes his childhood demons out on anyone who crosses his path; “Joseph D. his habits bad, he called his wife a little slut/Drinking whiskey making steaks, across his plate a shadows cast.” In the end, justice is meted out; “Joseph D. and me, his human punching bag/My zipped suitcase shut, my purple bruise, skipped out the door at last.” (It’s tempting to assume Joseph sports a MAGA cap).

The album’s best two tracks, “Jane” and “Get The Better” are cutting and sublime. The former is a previously unreleased song written by the late great Maggie Roche that Lucy has always wanted to record. This soaring ballad is powered by the kind of protean piano notes that were Maggie’s trademark, along with opalescent horns, willowy guitars, and subdued percussion. Lucy’s almost-soprano teases out the first verse and Suzzy slides underneath toward the end. Lyrics like “It’s like remembering rain in the sun or remembering sun in the rain/It’s down in a song that her hair’s brown and long, and her legs were strong,” conjure the enigma that was Maggie Roche. There’s a loneliness and an ache here that kind of takes your breath away.

The latter is the only song here written by both Lucy and Suzzy, and it’s equal parts diffident and somber, sincere and sly. Pulsating keys connect with slurry guitars and a heartbreak beat. Lucy starts it off, but once again, their harmonies magically coalesce. Cryptic lyrics seem to mirror their symbiotic, mother-daughter relationship; “Now the whole day long, we’re just killing time, burning all the candles down/She won’t leave my side, who takes care of who, all we do is hang around and I let her get the better of me, she’s an angel.” Guitars and keys fuse on the outro, before quietly fading away.

Other interesting tracks include a fairly faithful take on the traditional Irish Folk song, “Factory Girl,” as well as a slanted version of Connie Converse’s “Talkin’ Like You (Two Tall Mountains).” It’s easy to see why Suzzy and Lucy might be fascinated by Connie Converse, a singer-songwriter well ahead of her time, whose disappearance in 1974 renders her music all the more poignant. The album closes with a wistful cover of “Bein’ Green.”

Although it sounds as they their vocals were recorded together, due to the lockdown they each recorded vocals separately, at home. Producer Jordan Hamlin is the record’s MVP, tackling piano, drums, percussion programming, acoustic and electric guitars, plus bass, French horn, trumpet, banjo, cello, Mellotron, hammer dulcimer and accordion (phew).

As usual, Roche music simply defies categorization. I Can Still Hear You finds Lucy providing ballast for Suzzy’s flights of fancy. Quirky, wry and reflective, it honors the trio’s legacy, while forging a new path.