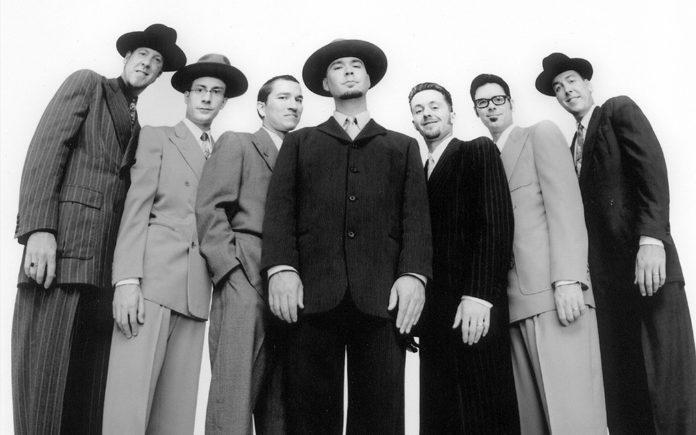 The Westin Mission Hills Golf Resort & Spa adds Big Bad Voodoo Daddy (BBVD) to the lineup of renowned artists that will be performing this Fall at the 4-star resort. Currently on its 8th season at the Westin, the Grooves concert series continues with Grammy award winning artists headlining 3 spectacular concerts on October 27th, November 24th and December 8th. The BBVD concert will be taking place November 16th as a part of the Cathedral City Hot Air Balloon festivities happening at the resort.

This Big Bad Voodoo Daddy concert is no ordinary concert, it’s a benefit concert to help raise funds for the American Heart Association in addition to being a part of the Balloon glow happening that evening at the Westin. In the background of BBVD’s performance, guests will enjoy the sights of hot air balloons being lit up like giant colorful light bulbs. Pilots coordinate to fire up the burners and illuminate their balloons all at once for a breathing taking view. The Westin Mission Hills is a proud sponsor of the Cathedral City Hot Air Balloon Festival.

Ticket proceeds of the BBVD concert will go towards the American Heart Association’s efforts to reduce disability and deaths caused by cardiovascular diseases and stroke. While guests enjoy the sounds of Big Bad Voodoo Daddy and the view, they’ll also be helping a good cause.

Tickets are $40-$120 and can be purchased at: www.hotairballoonfest.com or directly at https://www.eventbrite.com/e/balloon-glow-concert-tickets-49479616866

Kicking off the concerts happening this fall is the first Grooves concert with artists Melissa Manchester, Paul Brown, Gregg Karukas, and Michael Paulo on October 27th.

Join The Westin Mission Hills for an evening of great music and friendship featuring Grammy Award winning artists. Singer/songwriter Melissa Manchester is a Grammy award winner for her number one hit “You Should Hear How She Talks About You”. Guitarist Paul Brown is a two-time Grammy winning urban jazz producer with over 60 #1 radio airplay hits. Brown has scored countless hit singles and done thousands of performances across the world. Gregg Karukas won the Grammy for producing, composing, arranging, playing all keyboards and engineering Echoes of Love, which won Best New Age Album at the 55th Grammy Awards in February 2013. Michael Pauolo has been one of the most versatile and cosmopolitan saxophonists in pop, soul and contemporary jazz for nearly 35 years. These 4 artists will share the stage on October 27th at 7pm at The Westin Mission Hills for a great opening show for this series. Purchase Tickets: www.groovesatthewestin.com.

The series continues with an electric show on November 24th with SPECIAL EFX All Stars: Chieli Minucci, Elliott Yamin, Nelson Rangell & Lao Tizer.  Guitarist, composer, and arranger Chieli Minucci is three-time Emmy- winning and longtime leader of SPECIAL EFX, a major force on the jazz and world music scene for 35 years. Elliott Yamin is an American singer widely known for his hit single “Wait for You” and for placing third on the fifth season of American Idol. His self-titled album, released March 20, 2007, debuted at number one on the Billboard Independent Albums chart and at number three on the Billboard 200. Nelson Rangell is one of the most exciting and diverse performers in the genre, equally adept at soprano, alto, and tenor saxophone, as well as being a genuine virtuoso on flute and piccolo. Keyboardist and bandleader Lao Tizer is a gifted performer known for his genre-bending mix of jazz, classical, new age, and jam-oriented music. Don’t miss these artists hit the stage at The Westin Mission Hills November 24th at 7pm. Purchase Tickets: www.groovesatthewestin.com.

Michael Lington, Steve Oliver and the LA Collective will be taking over the stage at the last concert of the Fall Grooves series. Michael Lington is a Danish-American contemporary saxophonist, songwriter, producer, recording artist and a purveyor of soul and contemporary jazz. Steve Oliver is an American musician, guitarist, vocalist, songwriter, and producer. Backing them will be the hottest new ensemble in smooth jazz, LA Collective. LA Collective is comprised of these accomplished musicians: drummer Tony Moore, bassist Darryl Williams, keyboardist Greg Manning and Kay-Ta Mizuno. The LA Collective originally came together as a backup band for different artists on the 2014 Dave Koz Cruise to Alaska. The band’s success on their first tour made them a permanent fixture in the Southern California contemporary jazz music scene. The group draws directly from the diverse talents of its members and the “collective energy” they manifest on stage. Don’t miss these artists close out the Grooves series with a bang on December 8th at 7pm. Purchase Tickets: www.groovesatthewestin.com.

The concerts, which all begin at 7 p.m. with doors opening at 6:30 p.m., are open to hotel guests and visitors with individual tickets available from $45-$85. The top tier ticket includes a VIP reception featuring heavy appetizers and the opportunity to meet the artists. Reservations are required by calling (760) 770-2150 or via email to pinziminips@westin.com.

For music lovers traveling to the event, or for locals who want to turn the night into a staycation, a special room rate is available. Book online or call (877) 253-0041 and reference the code, “JAZZ.”