SOLD OUT:  Mavericks with Los Lobos, September 14, at 9 pm @ Morongo Resort and Casino

If there was an award for continually and successfully defying the laws of genre-identification while remaining relevant and respected throughout the decades, the road-tested Mavericks would win every year, ad nauseum. With one of the most stand-alone voices since Elvis and Roy Orbison (in this writer’s opinion), The Mavericks have outdared categorization with apparent disregard for anything but creating the music that pours out of their souls.  The one common thread, woven between each prismatic collection of neotraditional country, Tex-Mex, western swing, country pop, rock-a-billy and Latin-Fusion songs, is an authentically loving, respectful bow to the timeless and multi-cultural roots that timeless American music was built on. The Mavericks were Americana before the genre ever existed in the minds of award show producers, and they have owned it unapologetically, to the joy of many, always.

The aptly named Mavericks began their euphonic expeditions in 1989 and by their second album, What A Crying Shame, released in 1994, they had four top 40 country hits: “O What a Thrill,” “There Goes My Heart” and “I Should Have Been True.” A fifth single, a cover of Bruce Springsteen‘s “All That Heaven Will Allow,” peaked at number 49. 1995’s Music for All Occasions won the band a Grammy Award for Best Country Performance by a Duo or Group with Vocal for “Here Comes the Rain.”  They followed that up with “All You Ever Do Is Bring Me Down,” their highest country chart peak at number 13.

The band took a long break in 2004 but came back to earn two more Grammy nods for their critically acclaimed album, Brand New Day, with nominations for BEST AMERICANA ALBUM and BEST AMERICAN ROOTS SONG ( “I Wish You Well”). Not to shabby for the group’s first independent studio album, released on their own Mono Mundo Recordings. These accomplishments along with their CMAs, AMAAs and ACMAs are just a snapshot of the indelible multi-platinum footprint The Mavericks have left and continue to leave on the music industry.

Their bus was parked in Oklahoma City, when renowned guitar slinger, Eddie Perez, the guy on press duty that day, gave me a call to discuss the Maverick’s upcoming sold out show at Morongo Resort and Casino. The scheduled call interrupted a classic episode of the original Batman television series.  The interview quickly turned into an inspirational conversation that I hope to capture on behalf of our many local musicians and readers. 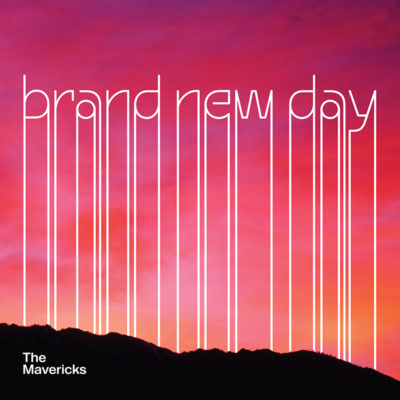 Eddie had joined the Mavericks just prior to their near decade long break. Perez began playing in bands at the age of 13.  His dad had taken him to see ZZ Top and he was fascinated.  A fan of Devo and Adam Ant (to name a few), Perez discovered Honky Tonk music thanks to Dwight Yoakam’s Guitars and Cadillacs. “Hearing that really turned me around and it gave me a focus,” he says. It was in 2003 when Perez replaced Nick Kane in the Mavericks, bringing his rock and roll flair and sensibilities with him. “You wouldn’t think that an influence of Jimmy Page or Angus Young of AC/DC would fit into The Mavericks, but somehow it does…I don’t even think of music in genres anymore.” Fit as he did, the band would break up in 2004.

Perez spent the time between 2004 and 2012 recording/touring with his main inspiration, Dwight Yoakum, as well as joining George Straight and Raul Malo in the studio for their albums. Eddie happily shared that it was he who “sent up the first Bat Signal,” as he put it (reflecting his TV programing of choice), that got the band back together. Singer Raul Malo had penned some songs that in his heart, he knew were songs that belonged to The Mavericks. “The timing seemed to be right for once. We wanted to do it right, so we met in the studio and said, ‘Let’s just see what we get.’  We ended up recording ‘In Your Arms,’ on the first take and from there, the whole record blossomed.”

Longtime friend and record producer, Scott Borchetta of Big Machine Records promptly and happily offered his support. Reflecting on that time, Perez shared, “We really weren’t quite prepared for how much the industry had changed while we were apart.  I am old school in my heart and soul, and the people I’ve gravitated toward have the same energy – an authentic, nostalgic vibe.  We do a lot of things ourselves now,” he said, referring to when the band established their own label in 2016, Mono Mundo Recordings (distributed by Thirty Tigers Through Red). Raul Malo described the transition to Forbes: “Our business concerns now go hand-in-hand with our artist concerns. They are two in the same, whereas before, whenever you work with another entity, there’s another agenda. When someone else owns your masters, you’re at the mercy of whatever business they need to take care of.” Mono Mundo Recordings was inaugurated with All Night Live: Volume 1, followed by the band’s debut studio album for the imprint, Brand New Day. With the two Grammy nominations it earned independently, decades after their genesis, it is clear – The Mavericks have not lost their stellar ability to create ripples in an everchanging music-verse. To talk to Eddie Perez, they will not be stopping again any time soon.  If anything, the goals are much loftier and even more meaningful.

“After all these years, we still find huge purpose in it,” Perez shared, his genuine joy and gratitude pouring through the phone.  The charismatic guitar player, who through his authentic love for the music and incredible work ethic has managed to maintain strong relationships in the industry amidst all the changes, beamed at the opportunity to talk to younger artists. “To the young artists out there – be true to yourself; figure out what you want to leave out there in the universe. It’s like the Blues Brothers say in their movie,” he laughs, ‘We’re on a mission from God.’  Joy has transcended to something greater than what we (The Mavericks) ever set out to do. These days feel like we’re standing on top of a mountain, and it feels great. I think artists around the world – dancers, painters, musicians – we all bring balance to a world that is almost apocalyptically troubled.  We have a platform to put out what we want to see in in the world, a common goal with likeminded old friends, to make things better.”