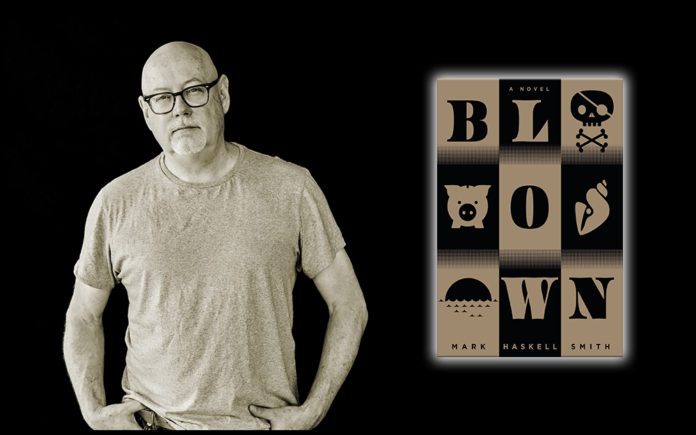 Wall Street is more than just an eight-block boulevard in New York.  It is the financial hub of the American financial services industry.  Besides being the home of the New York Stock Exchange and NSDAQ it represents a “take no prisoners” hot bed of capitalist greed.  Blown by Mark Haskell Smith (Black Cat, 225 pages) confirms that the one who has the money in the end, wins!

Protagonist Bryan LeBlanc is one of those guys on “Wall Street” who “gets” the unfair game of making a ton of money.  He is a financial genius and has managed to make hundreds of millions for his investment firm by his keen sense of foreign exchange.

Under LeBlanc’s cool capitalist exterior, is a seething hater of the industry that operates on greed to serve the one percent while exploiting everyone else and the planet. He has been quietly stealing from the capitalist thieves who pay his salary and now he is going to slip away with the cash and sail into the sunset.

With 17 million dollars waiting for him in the Cayman Islands, LeBlanc believes he has sufficiently covered his tracks, and has also created decoys to give him an ample head start.

But, the firm is quick to see the gaping holes where their money used be.  They send Neal, their in-house collections expert, to find LeBlanc, recover the money and keep it quiet so their clients don’t know they’ve been ripped off.  A little out of his depth, Neal is happy to go if only to keep his mind off his recent break-up with his boyfriend.

LeBlanc’s boss, Seo-yun Kim is a tough financial wizard who keeps to herself, but loves to suck cock, and hates looking bad.  She and Neal are sent after LeBlanc where they hook-up with a local private eye named Piet, who is a “little person” with a big dick all the ladies love.

Author Smith tells a witty and intelligent tale of greed, lust, murder and adventure.  I thoroughly enjoyed the cast of quirky characters and the evolving money grabbers as they each dream of a different life.

Money may not buy happiness but it may provide some freedom – that is, if you don’t get caught.  But is it worth committing murder?  For these powerbrokers – yes!  Sometimes it’s unavoidable and sometimes you get lucky with an unfortunate accident.  Of the group, only Neal is hell-bent on getting the stolen funds returned, but he does not have the stomach for murder.

The book is filled with laughs as well as insights to how Wall Street operates. I thought LeBlanc’s righteous anger at Wall Street financial institutions justified as well as being fascinating and informative from an insiders view.

As usual, author Smith does a great job entertaining the reader.  He gets the sweet joy of smart and capable people slipping into their primal selves.

Seo-yun, the boss lady, is my favorite character.  She was on track for the perfect life: a great job with money and power, and a fiancé who is planning their wedding.  All her ducks in a row.  But she discovers that is not the life she wants – it’s the life her parents want and it is boring as hell.  I love how she frees herself and lets her lust and desire choose her path.  I was rooting for Seo-yun and Piet — two outsiders, smart and capable, but lonely and starved for unconditional love.

I truly appreciate how Smith creates such well-rounded detailed characters that on the surface are doing everything right, and then quickly tunes into their fabulous flaws and delicious dark sides.

Sex, sailing, sunshine and the pursuit of happiness with loads of cash —  Blown is a great summer read and loads of fun.