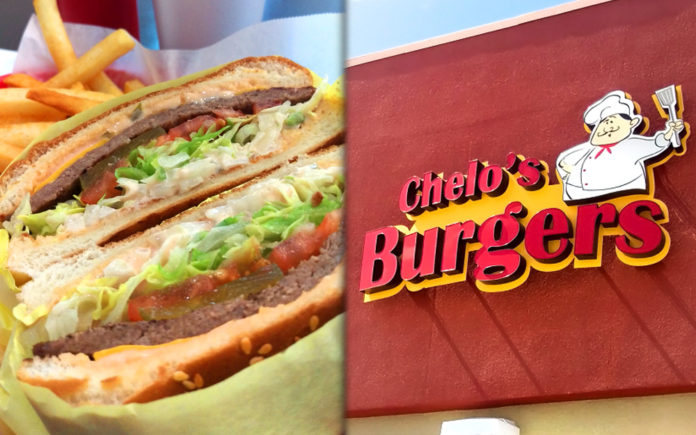 At the convenient am/pm off of Golf Center Parkway in Indio, you can get a whole lot more than just gas and a candy bar, right down the hall at Chelo’s Burgers #3.

I saw Chelo’s Burgers #3 on a Facebook posting and I just had to check it out, especially when I looked it up and realized that it was adjacent to an am/pm convenience store. Although am/pm is very convenient, it never really screamed “good food” to me, until now.

Opened two years ago, Chelo’s Burgers #3 in Indio is one of three locations (hence the #3) in the Coachella Valley (Cathedral City and Mecca), all attached to am/pm’s. The owners of the restaurants, brother’s Roger and Arturo Islas, work with the owner of the local am/pm’s, and run the Chelo’s Burgers (short for the original owners name, Marcello).

There are two entrances to Chelo’s Burgers #3, one from the inside of am/pm, or through their own separate entrance. They have a spacious dining space, complete with old school metal diner style chairs, gumball machines, and a T.V. for eating entertainment. On my visit, the counter was being attended by friendly team member Kimberly, and the grill was manned by jovial owner Roger. The menu sits suspended above the counter, and of course I was drawn directly to their burger options as it seems to be the star, part of the name of the restaurant. But there are so many other menu items, as the spot is opened for breakfast, lunch and dinner. However, for now, let’s focus on their bountiful burgers.

As it was my first time there, I asked Kimberly what the most popular burgers were. She suggested the Western Burger as one of the most popular, with bacon, onion rings, BBQ sauce, lettuce and tomato. Their Mushroom Swiss Burger was also calling to me, but after a couple of moments of pondering, I went for a classic ¼ pound Cheeseburger with fries and a drink, a combo nicely priced at $6.99. Kimberly suggested that I have the burger cut in two, as it was rather large. I agreed and had every intention of bringing half of it home for my boyfriend…an intention that was pure, but not brought to completion.

I took a seat and waited for my burger, which was served promptly to me not too long after. The burger and fries were cradled in a red plastic basket that looked tailor made for it. Kimberly was right, the burger was quite large, served with thick cut lightly seasoned fries. I was itching to take a big bit out of it, it looked so neat I just had to mess it up. The burger was expansive in its width, although the patty itself was not on the thick side, it really didn’t seem to matter. The chargrilled patty, was topped with cheese, Thousand Island dressing, pickles, fresh tomato and crisp shredded lettuce. The grilled sesame seed bun held everything together in a fit package, it worked perfectly together.

There’s something about Thousand Island on a burger, it brought me back to when I was a little kid, happy memories of going to Bob’s Big Boy….it’s amazing how certain tastes can transport you. The fries were on the thick side, and also very fresh (you can always taste the difference), and as I stuffed some in my burger, it made it even better. Needless to say, the half of the burger that I had every intention of saving for my boyfriend never did make it to him. I guess I was hungrier than I thought, or the burger was just too good to share (sorry Todd).

As I mentioned, Chelo’s Burgers #3 has many other menu selections besides burgers. For breakfast you can start your day off with some pancakes or French toast, a variety of omelets, breakfast sandwiches, burrito’s, Huevas Ranchero, chorizo and much more. Lunch and dinner provide a bevy of sandwiches such as their Club or their popular Philly Cheese Steak (which Roger says is a crowd fave), salads, fried chicken, fish and chips other selections. And don’t miss out on their Mexican specialties such as fajitas, enchiladas, tacos, burritos, tortas, tacos, tostadas and even Menudo. There are also many seafood dishes including an impressive looking Cocktail de Camaron and Caldo de Pescado (fish soup).

Chelo’s prides themselves in making scratch made food, made in house with attention to flavor and freshness. It’s like the freshness of something as simple as the shredded lettuce on the burger, it just makes all of the difference. The restaurant is opened daily from 6am to 9pm, and offers food to go.

Sometimes the best food will come out of the most unexpected places, like at an am/pm convenience store. Chelo’s Burgers #3 is such a place, ready to give great quality food to passersby, or those with exact intention. Either way, they are a tasty convenience.