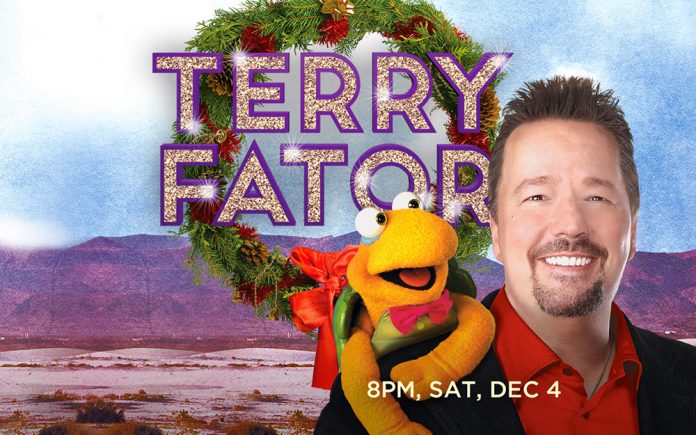 When I talk to comedian Terry Fator, I tell him I’ve noticed that the Covid lockdown and restrictions were actually been sort of a welcome and productive time for creative types.

Says Terry, “I agree wholeheartedly. I feel like it was an incredibly bad move on the government to consider entertainers non-essential.” He received emails, texts, and letters from fans saying at the worst time in their lives, his comedy lifted their soul, got them through a death or cancer, or various other examples. This type of uplifting entertainment is essential. In that way, it was hard for him to not be out performing at a time when fans greatly needed some levity. On the creativity side of it, he agrees it was a very productive time for him. “I began to take on more of the production side of it. I’ve always had a team – I would shoot a video and I’d send it off to them and it would come back to me a finished product. Now I do it myself. I went ahead and produced all but one of my videos in my Christmas show. So I’ve been doing it all myself and it’s been very difficult and very rewarding. It’s much more personal because it’s my baby now. Now every aspect of the show is what I did and put together. That’s a lot of fun for me,” says Fator.

The Christmas show he mentions, comes to the desert on Saturday, December 4 at Fantasy Springs Resort Casino. Fator tells me, “I’m bringing a whole bunch of new stuff to Fantasy Springs. It’s almost a completely new show, filled with holiday elements. It’s a hilarious show and fans will love it.” Not only current fans will laugh themselves out of their seats, but newcomers will become fans, as I noticed Terry is funny even on the phone during an interview, even when he’s not doing a bit.

Part of being a comedian is drawing inspiration from thing that don’t start out funny, but observing something and creating a hilarious story or situation around it. That inspiration can come from anywhere. Where does Terry come up with his ideas for characters or bits? According to him, “Inspiration can come from any direction. It can be anything! I grew up a country Texas boy. I went to college in Virginia and I had been a few places, but never been on West Coast much. I thought that plastic surgery type of lady you see were just characters in movies and tv shows. After winning AGT and coming out to California, I attended some Hollywood parties. I went to all Jethro Bodine, walking in there, ‘What in the heck, they’re real!’ Vicky the Cougar is based on a lot of these ladies I saw. The best part is, I can’t tell you how many people will tell me that Vicky the Cougar could be based on them!” Another such character is Dougie Scott Walker, who is based on a high school friend of Fator’s who other teens bought their weed from. Fator saw him in his 40s and learned he was now a businessman. But he imagined, ‘what if he were exactly the same now as he was then?’ Thus, the character Dougie Scott Walker was born, beloved by fans.

With the climate of today, a lot of comedians get piled on for being too edgy, when it just would have been considered hilarious 15 years ago. When asked how he handles that, Terry answers, “I don’t run into that because I’m not an offensive comedian. I go out of my way not to offend. I’m an evangelist of joy. You can’t do that if you’re going to be offending. I never do political humor because you know going into it you’re going to tick off half the crowd. We do live in an insane world where “Baby It’s Cold Outside” is offensive but “W.A.P.” is the song of the year. As much as I do go out of my way not to do that kind of material, I support others like Bill Burr who do that. If something isn’t my kind of humor, I don’t watch. This ‘if it offends me, it can’t exist’ idea is totally narcissistic. I’m a strong Christian, but if someone wants to put out anti-Christian comedy, they can. I just won’t watch it. It’s impossible to be woke and be funny. Part of comedy is a bit of a shock. Woke means you have to say and do everything exactly as I think, and that’s just…not funny.”

Terry Fator isn’t all laughs all the time, though. His most passionate advocacy is for American veterans and he shared where that passion stems from and what his connection is to it. “I love the military,” Terry tells me. “I’m a Christian and the best thing you can do is dedicate your life to serving others. There’s a line in the Bible, ‘Greater love has no one than this: to lay down one’s life for one’s friends’ (John 15:13) These men and women keep us free; many have paid the ultimate price. It’s the most noble cause you can have.” He goes on to say that when he was young, his best friend’s father was a POW in Vietnam and endured 7 years of torture in a Vietnam prison. He says, “This guy was at the Hanoi Hilton and I saw how he was treated there and once he got back. He didn’t deserve that, he was doing his duty. For those who opposed the war, I knew we should be honoring him for what he went through and blame the politicians who sent him there, not him. I told myself then if I ever got to a point where I had a voice, I’m going to use it for veterans.”

Terry Fator found success in his 40s, so what advice he would he give to an up-and-coming comedian? Fator says, “My advice to anyone: ‘making it’ is an incredible long shot, like winning the lottery. If I hadn’t made it, I would be just as happy doing what I loved to do. Winning AGT and getting a residence in Vegas certainly made my life easier but ‘making it’ was not the key to my happiness. So don’t set a goal of where you want to be, set a goal of what you want to do and love to do it. If you are paying your bills and love to do it – you’ve made it. I was very happy and content. It was a very grueling life but I would have done it until I was 90. You have to do it for love of the craft. I promise you, if you aren’t happy without fame, you won’t be happy with it.”

You, on the other, will be very happy if you go see Terry Fator’s show on Saturday, December 4 at Fantasy Springs Resort. For more information and to purchase tickets visit fantasyspringsresort.com/terry-fator.