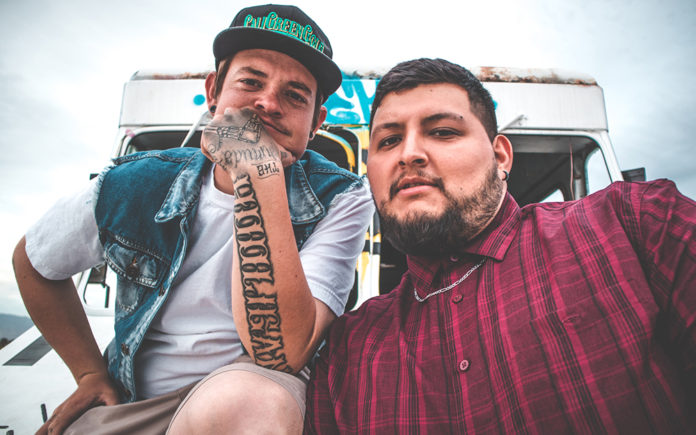 The Bermuda’s recent unusual disappearance from the desert music scene is not connected to paranormal or extraterrestrial activity. Instead, it was attributed to the natural attrition of the trio to a duo. With the bullshit aside, the group is ready to move forward and get back to a “MADD” pace and, as they say in their collab song “No Stress” with WILLDABEAST, “go where the wind blows.”

Coachella Valley Weekly solved the mystery of The Bermuda during a rap with the pair.

CVW: What does the world need to know about IvytheGiant & MaddHatter?

MaddHatter: “The world needs to know that IvytheGiant and MaddHatter are taking The Bermuda’s music to y’all soon! It’s been three years since we’ve dropped a project and right now is the time for us to make our statement in Hip-Hop. The music that we have finished for our new EP is the best music we’ve made to date…period! We’ve been working with a great engineer in the studio and created this collection of songs that fit and flow great as a project. The whole goal with this project and any future or past project is to show anyone that listens what we feel life is and should be about…the bigger picture.”

CVW: You have a few shows coming up. What do you like most about performing live & what do you want people to take away from your performances?

MaddHatter: “Yeah, we have actually been getting back into shows, since we finished recording the project, we figure it would be good to come out of the cave we been in and start stirring up a buzz again. The last three shows we performed were amazing! The crowds have been intense, they are loving all the new songs. Ivy and I have created one of our dopest sets. For me, the best part of performing is being able to take control of a room full of people that have no clue who the hell you are, but if they fuck with you by the second or third song you look across the room and ask them, ‘HOW THE FUCK Y’ALL FEELIN TONIGHT?’ and the whole crowd reacts in chaos, it takes me to a place of just complete happiness. I want people to walk away from our set wanting more, I want them to be tired and sweaty ‘cause our set had them moving or jumping or feeling the damn song. I’ve always watched rappers perform live and how they perform and what I always took away was if you entertained that fucking crowd and everyone left with this grin on their face and shirts sweaty, they would always show up again, and tell their friends about you. I want people to see our set and experience all their emotions by the end of our set.”

IvytheGiant: “I think whether performing in front of 5 or 200 people is an incredible feeling that you just can’t describe with words, there’s a certain energy and connection we create when we perform and seeing people respond to it in such a positive way is fucking awesome! When we know we’re going to perform live we always prep ourselves and figure out ways that we know people will love and interact with us, so at a show, we give people something completely different that they don’t feel when they listen to a song off the internet. We’re here to show you guys a good time and make sure you enjoy every second of it.”

CVW: You’ve been friends for a long time & together as a group since 2014. How do you address the necessary balance between friendship, artistry (writing & performing together) and the business of music?

MaddHatter: “Ivy and I have been friends since about middle school so about 13-15 years, I think. So, we will always be brothers; even if the music doesn’t work out. The fact that I can share a stage with Ivy means I trust him with my life, so I don’t have to worry about the business side of things, we always looked at the business to be split right down the middle 50/50. In 2018 we were going through a lot of personal issues in our lives and that’s why Ivy and myself kind of disappeared. But being able to get your personal life on track, the music side of shit just fell right into place, that’s why I would say now, ivy and I have never had better chemistry on stage and in the music and when The Madd Giants EP drops I really think everyone will be able to hear and see that. A lot of people have been saying the chemistry on stage looks so natural, so Ivy and I go damn whatever we’re doin’ its working so let’s keep axing at it then, why not ya know?”

IvytheGiant: “Personally, I think it’s just that we’ve been great friends for a long time and when it comes down to the music and business aspect of it we can always figure things out so easily because we both have the same vision in what we’re trying to do and achieve, so I just see it as two homies just having fun and doing their thang. We’ve never been the type to think of ourselves individually before the other person and the group, we both do it for the love of music.”

CVW: What separates The Bermuda sound from others in Rap & Hip-Hop?

IvytheGiant: “What separate us from other artists are the goals and dreams that we have thought of and just really trying to expand them to their full potential, we’re very determined in what we’re trying to do and we will never quit on music.”

CVW: Looking back on The Chronicles & Backyard Hooligans, what were the highlights for you in writing and recording those albums? 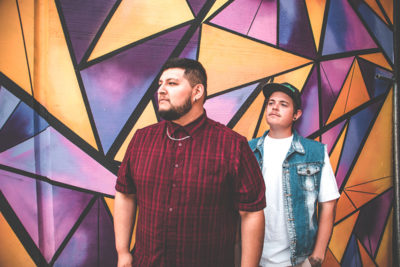 MaddHatter: “I look back at The Chronicles as one thing and one thing only. Ha-ha, that was our starting point, I feel to be an artist you have to have a beginning, and that’s The Chronicles; I had a bad flow and cringe lyrics ha-ha, but I’ll always love to go back to it because it shows how much we’ve grown. Backyard Hooligans was a teaching point. It showed what recording procedures worked and that’s when we really dabbled in creating and trying to find our sound which was headed in the right direction.”

IvytheGiant: “Just like MADD said The Chronicles was just a starting point and Backyard Hooligans was more of an experimental project where we tried to tackle all kinds of ideas. And I’m not ashamed of any of them, it shows you how much you progress and reminds you of what you created back in the days you started out. Creating projects is always an exciting adventure to us, we never know what to expect.”

CVW: You all have experience with other genres and sub-genres of music. What are your favorite types of music? 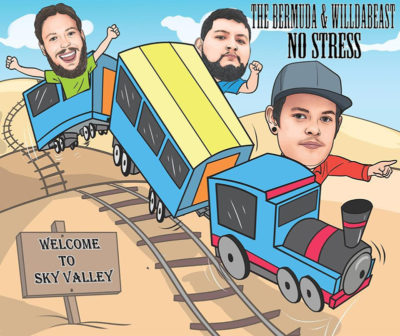 MaddHatter: “I feel like we have come from listening to a wide array of music. So when we create music there really is no boundary we aren’t sure about, we make music for people to listen to and take something away from the songs, whether it be something simple like ‘that song was tight’ to ‘that song made me change my life around’. To be told those things about the songs you poured your emotions and soul into, you sit back and go, ‘damn, they took what we made and took it to a whole other level’. The greatest thing to me in life is to put something out there you made and help save someone’s life. The friendships that we have made since we’ve started The Bermuda are stronger than friendships I’ve had for years. The world is full of negative, but I feel waking up every morning is a gift. As it is, there’s a lot of division and hate in this world. Ivy and I feel like music can bring anyone together around the world and to spread that positivity into this world is what it should be about. We aren’t afraid to try something new. I love Rap, Metal and old school Country. Instigator is a dope ass local band out here, those dudes sound like their straight out the hair days, its dope.”

IvytheGiant: “I’m a fan of anything if it catches my attention. I’ve always been a fan of Reggae and Alternative Rock, that’s what I mainly listened to in high school, it wasn’t until my sophomore year where I started getting into old school Hip-Hop and that’s where we kinda get our inspiration from. We’re always down to try new things and we have. We always try to infuse our version of Hip-Hop with other fundamentals of music and I think that’s what makes us interesting.”

MaddHatter: “What’s next is our new project The Madd Giants EP, which should be out before the end of the year. It’s what we feel like is ‘our sound’, where we need to be and that we’re on the right path. We worked with producers all over the world, we have some incredible local features on there. It’s an amazing sound from the first track to the last. We have a show in October with NECRO and Madchild at Catch One in Los Angeles, so that should be a fun party. After that we are going to take a small break from shows, and start getting the videos and promo material ready for The Madd Giants, we’re also throwing the idea around of a small tour in promotion for the EP. We kinda let it happen on its own and we go with it, and that mentality has been great so far so that’s the formula we’re going with now.”

IvytheGiant: “Our newest project is by far the greatest music we have ever created; we found an amazing producer that has taught us so much already, but we know this is only the beginning of our next chapter for the group.”

Find The Bermuda on FB

Watch & listen to the song No Stress by The Bermuda & WILLDABEAST