The Colombian-born and Coachella Valley resident J PATRON is in constant motion. If he’s not writing and producing music, he’s performing and touring. If he’s not developing new clothing designs, he’s spinning as a DJ. In the modern world of DIY creativity, he’s an artist built from the ground up. His tenacious approach to his music career is a template for any artist to mimic.

J PATRON’s joint performance of the song Xibalba at both weekends of the Coachella Valley Music and Arts Festival 2019 with Ocho Ojos, Savier1, PROVOKED and Verzo Loko was a significant milestone in the chronicles of CV music. Not only did that achievement shed light on the stupendous Latin artists we treasure, but it also contributed a platform to the multi-faceted and universal Rap and Hip-Hop desert music scene.

CVW: What have you been up to and what are your plans in the coming year?

PATRON: “Right now, I’m focused on putting out new music backed with content. I recently toured the United States and Latin America. I’ll be going out again to do a U.S. tour in March, starting in Austin, Texas at SXSW 2020 and we’ll hit all the big cities in Texas. Then we’ll head to Miami, then up the East Coast, Midwest then come back home. There is an international tour in the works. The music video for my last project, American Dream and Colombian Fantasy, should be dropping soon. It’s an animated video from my friend Javier from Mexico City for the song “Duro” featuring Yoga Fire.”

CVW: You attended and performed at SXSW 2019 and had significant exposure and success. Are you returning next year?

PATRON: “Yes, I will be building a tour around it. When I tour, I usually always go solo, but this time I’m taking Razor J with me. I’ll definitely have him on guitar and a DJ who can perform on a drum machine and the cat I’m looking at is a great keyboardist too. When I perform with Razor J it’s just a whole different energy, that kid is wild and super-fucking talented and great on stage. I’m trying to create a vibe on stage rather than just vocals.”

CVW: In your opinion, what can CV artists, fans, the community and media do to continue to support an upswing in growth for Rap and Hip-Hop from this area? 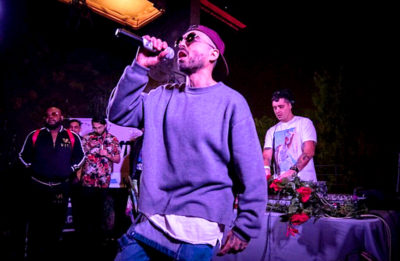 PATRON: “Just keep doing what you’ve been doing the last couple of years. It’s been crazy growth within the local Hip-Hop community from Phil Lacombe and Tracy Dietlin at CV Weekly to Brian Blueskye at Desert Sun to KESQ and CBS2, a lot of the press has opened doors for a lot of us; we have more fans, more shows and more visibility because of it. When you think of music in Southern California no one thinks of the desert when it comes to Hip-Hop, everyone thinks of L.A., Compton or South Central. We got a booming scene out here. At one point, it was way bigger than it is right now, but now it’s going back up on that wave. Everything has its peaks and valleys; we’re working our way back up. Everyone has a different target population and market, I specialize in the Latino, Urban, Reggaeton, Cumbia and Hip-Hop, so it’s hard to get the attention of the non-Latino communities so I do a song with PROVOKED or a show with WILLDABEAST and our fans are all blended with each other and at the end of the day its Hip-Hop. We end up growing from each other; it’s amazing. It’s a lot of help when we have the opportunity to be interviewed or to be nominated for awards, people take you more seriously. It’s not just somebody making music in their garage or bedroom and uploading it, these artists are spending money on billboards, PR campaigns and music videos; there’s a craft and money behind it.”

CVW: What kind of advice can you provide serious artists from our area and abroad?

PATRON: “I would advise all artists to sign up with one of the performing rights organizations ASCAP or BMI to register and copyright all your work so you can get paid and don’t have to just depend on show money and merch sales. You can generate some income from your music. It’s not a lot but it’s something. Little by little it can grow. It’s not as great as it used to be, but it doesn’t mean it isn’t there. Be creative with your merch. Put your brand on everything. Put your logo on a coffee mug, everybody drinks coffee. Don’t just record a song and upload it on SoundCloud, put some thought into it, market it, spend some money on it, work with a PR company who can put it on some blogs.”

CVW: You’ve been known to light the candles at both ends. Do you consider yourself a workaholic?

PATRON: “It wasn’t until this year that I started working smarter instead of harder. I read a book about the The Pareto Principle or the 80/20 rule. It says that 20 percent of your activities will account for 80 percent of your results. I went back and looked at all the songs I created with less effort and less time and didn’t think too much about them and just let them flow naturally. Those are the songs that get the most plays. I wake up every morning at 5:30. I play music or start working on music and meditate or get a little workout in and then I’ll go into writing mode. I’ll read a little before to get some fresh words in my head. I’ll read books that I’m really into. I have a schedule, Mondays and Tuesdays are production, I’ll produce and work on beats, Wednesdays and Thursdays I’ll work on lyrics. Friday and the weekend I’ll do shows and work on clothes. I also design. If I don’t have a schedule my brain is fuckin’ scattered everywhere and I’ll get overwhelmed. With no organization and nothing written down, things become harder to accomplish. If you’re not a workaholic in this industry, there’s no place for you. It’s your hobby if you’re not a workaholic. It’s my passion, my dream and my reality. You have to block time to make your time. I write, plan and list everything. If you go in my studio there’s a vision board on my wall with notes all over it.”

CVW: Any final thoughts to share with our readers?

PATRON: “I appreciate the love. Don’t just listen and buy the music, but make it to the shows, buy the merch, keep interacting with us and let’s keep the ball moving.”